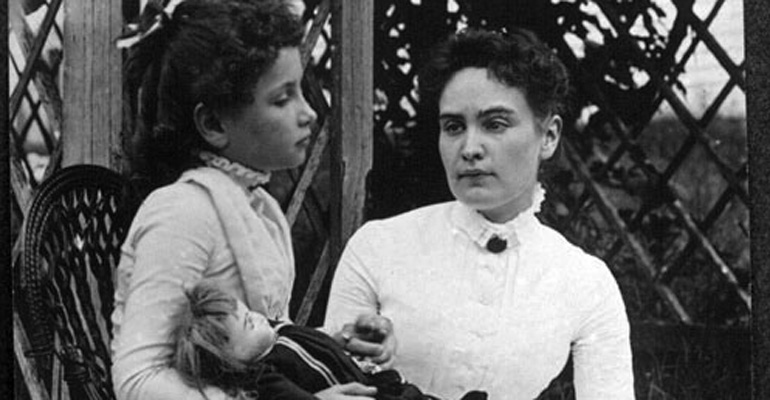 March 3, 1887 – Tuscumbia, Alabama: It would prove to be the most important day of 7-year-old Helen’s life. It was the day the 20-year-old teacher arrived from Boston, Massachusetts – the day Helen began her journey out of a prison of silence and darkness into a world of knowledge and freedom.

Helen Keller was born in 1880 in Tuscumbia. At 19 months, she contracted scarlet fever and the country doctor predicted she would die within a week. Helen survived, but the illness left her permanently deaf and blind.

The daughter of the Keller’s cook was assigned to watch Helen and it was a job no one wanted. By age 5, Helen had become more than the family could handle. She angrily slapped, kicked and screamed herself into exhaustion when unable to get her way. Consequently, Helen usually got her way.

Helen’s mother, Catherine, heard of a doctor in Baltimore who could treat blindness. The visit to the doctor was unsuccessful, but he suggested that they contact Dr. Alexander Graham Bell. They did so immediately. Bell recommended the Kellers hire a teacher from the Perkins Institute for the Blind in Boston. Although unsure if a teacher would even come to rural Tuscumbia, Catherine wrote a letter to the Institute in the summer of 1886 requesting the services of a teacher.

Anne Sullivan, who had been the valedictorian of her class at Perkins a year before, agreed to come and arrived in Tuscumbia in early March 1887. Her mission was to teach Helen to read and write. A few days after arriving, Anne watched in shock as Helen walked around the dinner table, using her hands to eat food from her parent’s plates. It was the only way they could get Helen to eat.

When Helen approached Anne’s plate, Anne pushed her away. They struggled and Helen slapped Anne. Helen’s father demanded Anne take her hands off Helen, but she refused and subdued the young girl after a short wrestling match.

“Miss Sullivan, you don’t know Helen well enough to understand,” Catherine told Anne. Anne responded, “I know enough to know when I see a badly spoiled child. Now, if everyone will leave the room, I will begin Helen’s education.” They left and Anne expected to be fired, but the family realized that she was right. Thus began Helen and Anne’s journey together.

Anne’s strong will soon overcame Helen’s rebelliousness. She taught Helen words by writing with her finger in Helen’s hand. A breakthrough came three weeks after Anne arrived. They began with d-o-l-l. Then at the well water pump, Anne placed Helen’s hand under the faucet and spelled w-a-t-e-r. It clicked for Helen – she connected signing in her hand with the objects in her world. In the next few months Helen learned more than 600 words and how to read Braille.

In 1900, with Anne by her side, 20-year-old Helen journeyed to Cambridge, Massachusetts, and enrolled at Radcliffe College, at the time the women’s branch of Harvard University. Helen learned to read French, German, Greek and Latin. Four years later, she became the first deaf and blind student to graduate from college.

Anne and Helen remained inseparable. In 1905, when Anne married John Macy, and they moved to a farmhouse outside of Cambridge, Helen moved in with them. Anne helped Helen write her autobiography, The Story of My Life, which helped make Helen famous. The two traveled on numerous lecture tours in America and around the world. Because Helen’s broken words were difficult to understand, when on stage, Anne helped relay Helen’s words to the audience.

Anne Sullivan remained a faithful companion to Helen for four decades until her death in 1936 at age 60. During her lifetime, Helen Keller visited 39 countries, wrote a dozen books and met 12 U.S. Presidents. Before her death in 1968, she received the Presidential Medal of Freedom, the highest honor an American civilian can receive.