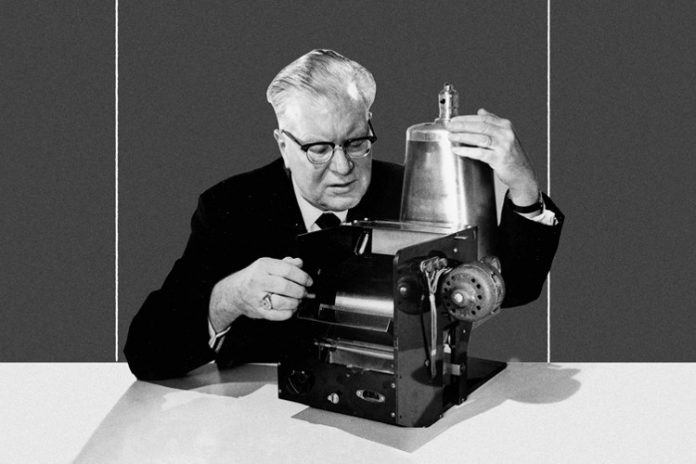 October 22, 1938 – Small apartment in Queens, New York: Chester Carlson and his buddy Otto Kornei, an unemployed physicist, stared at each other in disbelief. After a year of experiments in the kitchen, several fires, and an angry wife, they had produced the world’s first copied image.

Kornei wrote, “10-22-38 ASTORIA” (the date and neighborhood) on a microscope glass slide with ink. When the slide was placed on a sulfur-coated zinc plate and exposed to bright light, a copy of the imaged appeared on the plate. They did another experiment to be sure. They had finally done it!

Chester Carlson worked his way through Riverside Community College and the California Institute of Technology, earning a degree in physics in 1930. With Depression-era jobs scarce, he applied to 82 companies before finally landing a $35-a-week position with Bell Laboratories in New York.

After earning a law degree at night from New York Law School, Carlson joined P.R. Mallory, an electronics firm and was promoted to head of the patent department. He grew frustrated that there never seemed to be enough carbon copies of patent specifications. The choices were expensive photographs of the documents, rewriting, or retyping lengthy documents.

Carlson decided to find a solution to his copy problem. He spent his evenings at the New York Public Library reading all he could find about imaging processes. Then he and Kornei began trials in his apartment kitchen. He filed for a patent on April 4, 1939. By then, Carlson’s wife had thrown him out of her kitchen, and he had moved his lab to a small room on the second floor of a warehouse in Rochester, New York.

Summer 1944: Carlson sat in his lab with his head in his hands. Maybe it was time to quit. During the five-plus years since filing the patent, he had pitched his invention to more than twenty companies, including IBM, RCA, General Electric and Eastman Kodak, only to be rejected. Even the National Inventors Council snubbed his idea – the scientists who visited his little lab were not sure the invention was theoretically possible.

Finally, in late 1944, Battelle Memorial Institute, a non-profit technology group in Ohio signed a royalty agreement with Carlson. Three years later, Battelle signed a deal with Haloid, a small photo paper copy company in Rochester to develop and build the copy machines. Carlson quit his job as a patent attorney to be a consultant to Haloid, who was struggling to market his unusual invention.

It took five years for Haloid to develop a commercial copy machine. In 1949, they shipped the first photocopier, the Xerox Model A Copier, but the device was a dismal failure. It was too difficult to use, requiring 39 manual steps to make a copy.

A decade later, in March 1959, and two decades after Carlson’s patent filing, Haloid (later to become Xerox) produced the 914 Copier, the first commercial office copier. The product was a phenomenal success. In the first eight months of production, Haloid sold more copiers than they had expected to sell during the life cycle of the product.

Years later some called Carlson’s invention the most significant breakthrough in communication since German Johannes Gutenberg’s invention of the printing press in 1450. Fortune Magazine termed it, “the most successful product ever marketed in America.”

Looking back on the 20 years, Chester Carlson reminisced, “The years went by without a serious nibble. I knew that I had an idea by the tail, but could I tame it? I became discouraged and several times I decided to drop the idea completely. But each time I returned to try again.”