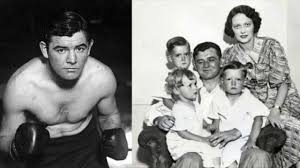 The country’s heart had been moved by a man they had come to know as the Cinderella Man. A New York sportswriter dubbed Braddock the “Cinderella Man” because of his seeming fairy tale rise from a washed-up local boxer to the heavyweight championship – but Braddock’s story was hardly one of fairy tales; it was a story of survival.

Braddock was born in 1907 on 48thStreet in New York City, a couple of blocks from Madison Square Garden. His early ambition was to play football at the University of Notre Dame, but with more brawn than brains, he turned to boxing. He honed his amateur boxing skills around Long Island and at age 21 he turned pro as a heavyweight fighter. Over the next three years, Braddock rose through the boxing ranks with a record of 44-2-2, with 21 knockouts.

Unfortunately, like millions of Americans, Braddock lost everything in the stock market crash of 1929. He knew firsthand the fear, humiliation, and hopelessness that came from standing in a breadline to feed his family. On this summer night, Braddock was a much-needed champion for the millions who huddled around their radios, praying that somehow Jimmy Braddock, a 10 to one underdog, could do the impossible.

Compounding his dire financial situation, in 1929 Braddock also broke his right hand in a fight and his boxing career nose-dived as he lost 16 of his next 22 bouts. Discouraged, and fearing his career might be over, Braddock stopped training and got work whenever he could as a longshoreman on the docks. He got an occasional boxing bout to help with the bills.

By 1933, with few boxing opportunities and work hard to find at the docks, Braddock swallowed his pride and signed up for government assistance to buy milk and bread for his three children. During that winter, his circumstances went from bad to desperate. Because he couldn’t afford to pay the power bill, the electricity was turned off to the family’s apartment and social services took his three children away.

By 1934, hopes and dreams were about all Braddock had left of his boxing career, but his luck was about to change. Due to a last-minute cancellation, he was given an unexpected fight with a highly regarded heavyweight boxer named Corn Griffin. No one expected Braddock to knock Griffin out in the third round. In early 1935, Braddock’s fairy tale continued when he defeated Art Laskey, another contender.

In May 1935, the handlers of heavyweight champion Max Baer, thinking Braddock would be an easy payday handpicked him for the championship fight. Baer took Braddock lightly and hardly trained for the fight. Braddock, on the other hand, trained as if his family’s very lives depended on the outcome. They did. While Baer was fighting to defend his title, Braddock was fighting for bread and milk.

When asked by a reporter if he was afraid of Baer’s vicious punching ability – Baer had killed Frankie Campbell in a fight in 1930 – Braddock responded, “Fighting a Max Baer, or a Bengal Tiger, will be a picnic compared to what I have had to face over the last few years.” Across America, Braddock was fighting for anyone who was down on his luck, for all who had ever been given up on.

The crowd came to The Garden pulling for the underdog, but they also came expecting an early-round knock out by Baer. Outweighed by 40 pounds, Braddock survived the first three rounds and as the crowd roared his confidence grew. Carried by 30,000 voices, Braddock stunned the boxing world with a unanimous 15-round decision. On that night, Jimmy Braddock’s heart was bigger than his talent. On that night, one man’s courageous comeback inspired a whole country to keep fighting.