by peteblack4ua@gmail.com | May 12, 2020 | Adversity, Courage, Determination Despite the Odds | 1 comment 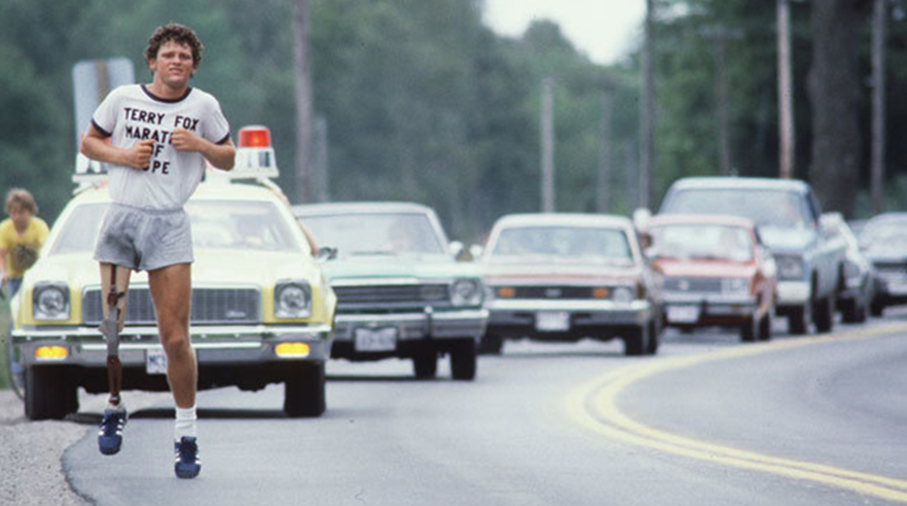 March 4, 1977 – West Minster, British Columbia: Terry Fox’s x-ray results were back, and the doctor had asked to share the news face-to-face. Rolly Fox drove his son to the appointment with orthopedic surgeon Michael Piper. Neither of them spoke during the 30-minute drive. They expected bad news.

Terry had first noticed the pain in his right knee in early November. A guard on his Simon Fraser University basketball team, he figured it was a cartilage problem. He played through the pain. In February, at the end of the season, Terry visited the school infirmary for pain pills. By early March, the pain kept him awake at night.

Terry was diagnosed with Osteogenic Sarcoma, an aggressive bone cancer, which frequently starts in the knee. On March 9, the 19-year-old’s leg was amputated six inches above the knee. The night before the surgery, Terry’s high school track coach gave him a copy of Runner’s World magazine with an article about Dick Traum, the first amputee to complete the New York City marathon. Terry told the nurses that he would do something like Traum.

A month after the surgery, Terry played golf with his dad on his new artificial leg. Chemo sessions occurred every three weeks for 16 months. Inspired by Dick Traum, and moved by the sad faces and stories of those he met in chemo, Terry quietly decided to run across Canada to raise money for cancer research. He would run a marathon each day until he finished his mission.

In February 1979, Terry could only run one mile on his prosthesis. Physical therapists made changes to the leg to better withstand the impact of running. Completing a 17-mile race in Prince George, British Columbia, in August encouraged Terry that he could start his run in the spring. When he finally shared his ambitious goal with his mother, she was strongly opposed, but his father asked when he planned to start.

Terry gained the support of the Canadian Cancer Society, War Amputations of Canada, Ford Motor Company and Adidas Shoes. On April 12, 1980, he dipped his stump in the Atlantic Ocean in St. John’s, New Brunswick and began his Marathon of Hope – his goal the Pacific Ocean in Vancouver, British Columbia.

Supported by his high school buddy, Doug Alward, who drove a van along the route, Terry ran a marathon, 26 miles, each day. The response and fundraising was poor as Terry ran through the New Brunswick province, but things changed in Ontario when the Toronto Star newspaper journalist Leslie Scrivener began a weekly column to update Terry’s journey. Terry became national news.

Canadian Prime Minister Pierre Trudeau met Terry on the road in Ontario. By now, Terry had a police escort along the route. As he ran through the summer, donations, crowds and news coverage increased. By September 1, Terry had run for 143 days, 3,339 miles, before he was forced to stop in Thunder Bay, Ontario – the cancer had returned in his lungs. Terry died of cancer on June 28, 1981, one month before his 23rd birthday, and nine months after being forced to quit his cause. More than $10 million was raised through Terry’s Marathon of Hope.

The first Terry Fox Memorial Run was held in September 1981. A crowd estimated at 300,000 people showed up that day and donated $3.5 million for cancer research. On Sunday, September 15, 2019, the 33rd  anniversary of the first run, three million people in 60 countries participated in their local Terry Fox Run. The event is the largest one-day fundraiser for cancer in the world.

The Terry Fox runs are not timed. There are no major sponsors or entry fees. Instead, the focus is on donations to cancer research and remembering Terry’s indomitable spirit and his Marathon of Hope. More than $750 million has been raised to fight cancer through annual Terry Fox events all around the world.