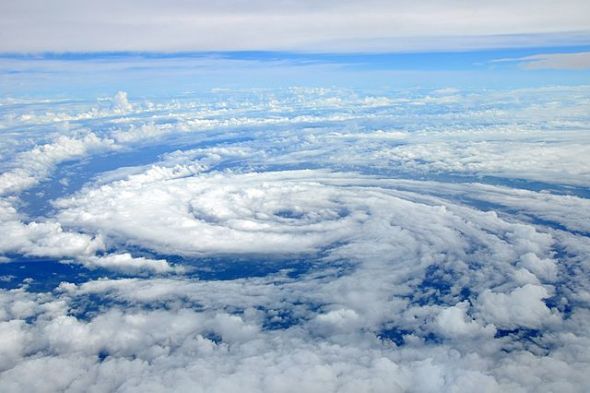 July 26, 1943 – Bryan Air Field – Bryan, Texas: The alcohol and testosterone flowed freely that night at the Officer’s Club bar. The worthiness of the AT-6 trainer airplane and the hurricane churning off the Texas coast were the hot topics of conversation. The British pilots joked that the plane was slow, fragile and certainly not storm-worthy and Colonel Joe Duckworth had grown tired of their joking about the durability of the aircraft.

“Colonel, if your plane is so stout,” challenged a British officer, “then fly it through that hurricane. I dare you.” The Duck had had enough to drink that he accepted the dare. What better way to prove the merits of his aircraft and the value and safety of instrument flying than in the eye wall of a hurricane? He decided to teach them a lesson.

Joe Duckworth was born in 1902 and grew up in Savannah, Georgia. After graduating from college, at age 25, he enlisted in the U.S. Army Air Corps as a flying cadet, earned his wings and received a commission in the Army Air Corps Reserve at Kelly Field in Texas. After this assignment, Duckworth went on to fly for the Ford Motor Company, the Curtis-Wright Flying Service and later for Eastern Airlines.

During his time at Eastern, Duckworth gained knowledge of instrument flying. He pioneered the art of using the plane’s instrumentation to fly as opposed to flying manually. As a result, he became proficient at flying at night and in storms.

In 1940, Duckworth was called to active duty and was promoted to lieutenant colonel at the start of WWII. He was shocked by the lack of instrument flying experience in the Army Air Corp. In 1942, Duckworth’s knowledge of instrumentation led to an assignment as commander at the newly created instrument flight school at Bryan Field. The base had a large contingent of British pilots who were being trained to fly night missions over Germany.

On that hot July night in 1943, the drinking at the club continued well into the evening as Colonel Duckworth began to consider his plan. He decided not to notify headquarters of the dare. He would rather ask for forgiveness than ask for approval. Then he talked Lieutenant Ralph O’Hare into being his navigator and meteorologist for the flight.

Two days prior, the season’s first hurricane had formed well off the Texas coast, but because of WWII, it received little news coverage. The weather service forecasted the storm to come ashore in Galveston with heavy rain and gusty winds 30 to 40 miles per hour.

On July 27, Colonel Joe Duckworth took the dare of the British pilots and became the first person to deliberately fly through a hurricane – a Category 2 storm with wind gusts to 130 mph. He likened the experience to “being tossed about like a stick in a dog’s mouth.” When they landed, Lieutenant O’Hare swore that it was his first, and last, flight into a hurricane. But later that day Duckworth went back up with the school’s weather officer to get wind velocities and barometric pressures. Nothing was ever mentioned again by the British pilots about the sturdiness of the AT-6.

“Courage is one thing, a sense of purpose another. When you put them together in one human being, the world can be changed.”  John Brown