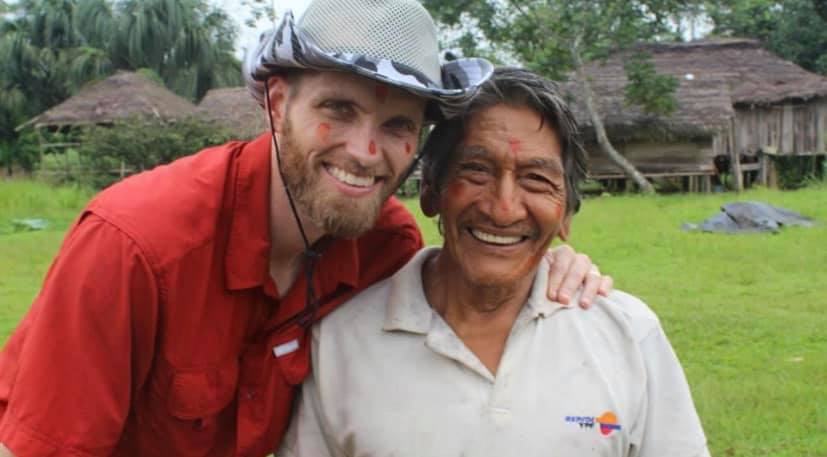 July 2000 – Amsterdam, Holland: Maemae Mincaye stood at the podium at the Billy Graham Evangelistic Conference. With more than 11,000 attendees from 209 countries, it was the largest event ever of its kind. Mincaye’s Macaw headdress, pig-tooth necklace and the large plugs in his ear lobes made him memorable to all.

Steve Saint, Mincaye’s speaking partner, gave a brief introduction. “Maemae means grandfather. This man, whom my children affectionately call Grandfather is their new grandfather. He replaced my father, Nate Saint. In 1956, when I was 5-years-old, Mincaye speared my daddy to death on the banks of a river in the Amazon Jungle.”

Mincaye spoke to the audience. “When I kill Steve’s father, I did not know he coming to show us new trail – Waengongi, the Creator’s trail. All I know is killing. My heart black with sin. When later I met Waengongi, my heart changed to peace and love. No more killing. Now walk Waengongi’s trail.”

In the 1950’s anthropologists who observed the primitive Waodani tribe in the Amazon rainforest of Ecuador labeled them the most violent tribe ever studied. Their philosophy, kill or be killed, resulted in a death rate of more than 60 percent and a life expectancy of fewer than 30 years. The Waodani were slowly annihilating their culture.

On January 8, 1956, Nate Saint, a missionary pilot and four of his fellow missionaries, made their first visit to the Waodani tribe. Nate’s small bush plane landed on a sandbar on the banks of the Curaray River. The men set up camp waiting and hoping to make friendly contact with the Waodani. On the third day, Mincaye and 10 Auca warriors showed up and speared the missionaries to death on the banks of the river.

Despite the unspeakable tragedy, Nate’s wife, Marj, and Elisabeth Elliott, another missionary wife, chose to honor their commitment to the Waodani tribe. Marj raised three children in the jungle of Ecuador. Nate’s sister, Rachel, also moved to Ecuador to join the ministry.

Ashamed for the horrible thing they had done, the Waodani invited the missionaries into their village. The men built huts for the women, and they made a special hut they called Waengongi Onco, the Creator’s House. There they gathered to learn about Waengongi’s carvings and his son, Itota.

The Waodani ancestors had taught them that when they died they would come to a boa constrictor on the afterlife trail. They believed they would have to jump over the giant snake to continue on the trail. If they failed, they were turned into termites. No one had ever shared with them that Itota came so they could live with Waengongi after they died.

A miracle transformation began among tribal members. The same warriors who killed Nate Saint and his buddies baptized Steve and his two sisters at the river sandbar where the murder occurred.

One night out of the blue, and years after murdering the five missionaries, Mincaye shared with Steve, “Never seen anything like it before. When missionaries dying, we see them rising above the trees. We see bright lights and see them joined by a choir singing. We know we had done badly. Badly. Later missionaries teach us to walk Waengongi’s trail.”

When Mincaye died April 28, 2020, he was somewhere between 88 and 91-years-old. Before his death, Steve Saint and Maemae Mincaye traveled the world telling their story about the power of Waengongi’s love.

Steve eulogized Mincaye at his funeral in the Amazon. “I loved the old Amazon warrior – who took me into his family when I was a fatherless boy – as much or more than I loved my own father. Thousands of people from all over the world have told me what happened on that river sandbar in 1956 was a turning point in their lives. Sixty-five years later, what was intended for evil, God continues to use for good.”