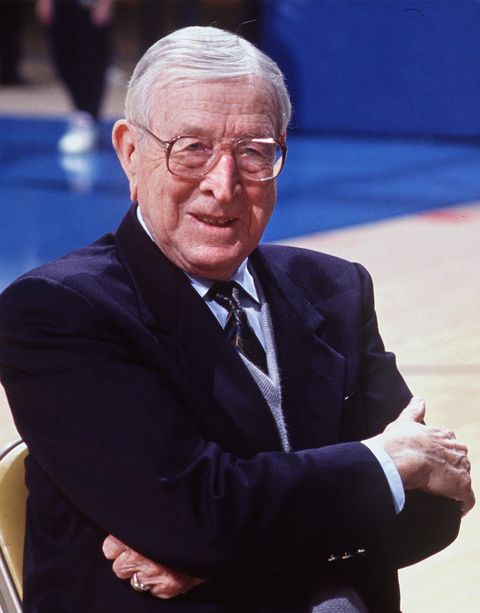 1933 – Dayton High School – Dayton, Kentucky: The sports editor of the Dayton High School yearbook was critical of the first-year basketball coach. “A discouraging season,” the annual said of the Green Devils’ six-win, 11-loss season. In his first job out of college, the small high school’s 23-year-old newly married English teacher and basketball coach was discouraged.

John Wooden talked with his wife about quitting his job and moving back to their home state of Indiana, but she convinced him to try it one more year. In his second and final year as Dayton’s basketball coach, his Green Devils made a better showing with a record of 15-3.

Wooden grew up on a farm in Centerton, Indiana. After the chores were done, he learned to play basketball by shooting hoops in the barn with his three brothers. In 1927, Wooden led Martinsville High School to the state basketball championship and became an All-American guard at Purdue University for three straight years. In 1932, Wooden led Purdue to the National Championship.

After graduating with honors in English, Wooden turned down an opportunity to play professional basketball, married his sweetheart Nell Riley, and moved to Dayton, Kentucky, to be a high school teacher and coach.

After his second season at Dayton High, Wooden returned to Indiana to teach English and coach basketball at South Bend Central High School. In nine years at South Bend, his teams enjoyed great success, winning 218 games and losing only 42. In 1943, during World War II, Wooden joined the United States Navy and served as a physical education instructor.

After his Navy discharge, Wooden became the head basketball coach at Indiana State Teachers College. He was there for two years and won conference championships both seasons. In 1948, Wooden became the head basketball coach at UCLA. It was not a popular coaching stop; the Bruins were the worst team in the Pacific Coast Conference and lacked an on-campus basketball facility. The basketball team shared a practice facility with other sports. In Wooden’s first season, he won 22 of 29 games and in his first eight seasons UCLA won three conference championships.

John Wooden was inducted into the College Basketball Hall of Fame as a player in 1961 and as a coach in 1973, becoming the first person to achieve both honors. In 1975, he retired one week after winning his tenth National Championship. In 1999, ESPN network selected John Wooden the NCAA Coach of the Century.

Regarding his coaching career, Wooden reflects, “I would have been satisfied just coaching in high school. I turned down several colleges when I was teaching in South Bend before I entered the Navy. I honestly believe that if I hadn’t enlisted, I would never have left high school coaching.”

John Wooden often referred to that first year of coaching at Dayton High School, his only losing team, as the most important season of his epic career. In the following years he frequently spoke at high school sports banquets and always told audiences, “I learned what not to do.”

The students publishing the 1933 Dayton yearbook in Campbell County, Kentucky, could never have imagined that the basketball season they were covering would become legendary coach John Wooden’s only losing season.