by peteblack4ua@gmail.com | Mar 6, 2018 | Adversity, Courage Under Fire, Determination Despite the Odds, Uncategorized 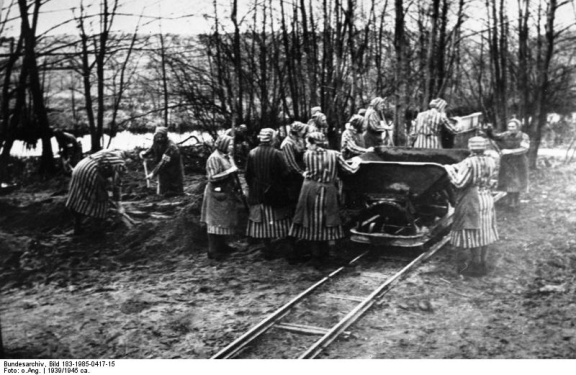 Prisoners No. 66729 and 66730, sisters Betsie and Corrie, huddled under the small, dim light in the back of Barracks No. 28 so they could read their worn, smudged Bible, which they had miraculously smuggled into the prison. After standing for an hour at 4:30 AM that morning, shivering in the pre-dawn cold for roll call, they had worked for eleven hours at a Siemens factory loading steel, and then returned to the barracks to find help and hope in the scriptures.

They were the daughters of Casper ten Boom, a jeweler and watchmaker in Haarlem, Holland, and his wife who had four children, including, Elisabeth “Betsie” ten Boom, born August 19, 1885, and her younger sister Cornelia “Corrie” ten Boom, born April 15, 1892. After his wife’s death from a brain hemorrhage, Casper raised the children in a two-story house located above his watch shop. The ten Booms were devout Calvinists in the Dutch Reform Church and the family frequently offered food and shelter to those in need.

In May 1940, German military forces had invaded and conquered Holland in just five days, and life for the ten Booms changed forever. Because of their deep love for the large Jewish community in Haarlem, who they considered God’s Special People, the family turned their house into a place of refuge for Jews trying to escape from the Nazis. The watch shop made for a nice façade to disguise what was actually happening in the rooms above.

The ten Booms built a secret room, a hiding place, behind a false wall in Corrie’s bedroom, which was located on the top floor of the house. The two by eight foot space could hold up to six people. An alarm buzzer mounted near the entrance to the shop was used to alert the refugees when the German Gestapo made security checks. With this warning, the Jews still had only a minute to enter the hiding place once the Gestapo reached the premises. Harboring Jews was punishable by death or imprisonment and the entire household understood the consequences of being caught.

On February 28, 1944, after a neighbor informed the Gestapo of the ten Booms clandestine activity, the entire Ten Boom family was arrested and taken the following day to Scheveningen Prison, forty miles away. There they were separated and, unbeknownst to Betsie and Corrie, their eighty-four year old father died ten days later. After five months, while being herded with hundreds of other female prisoners into railcars to be transferred to Germany’s notorious women’s extermination camp, Ravensbruck, Betsie and Corrie were miraculously re-united.

Conditions at Ravensbruck were beyond human imagination. It is estimated that as many as 117,000 women died or were exterminated there between 1939 and 1944. Barracks 28, built to accommodate about four hundred people, housed 1,400 women, who shared eight toilets. There were no individual beds, or blankets, and women were forced to sleep side-by-side on long piers, on soiled, flea-invested straw. Many women starved to death at the facility. The daily morning food ration consisted of a stale piece of black bread and a cup of coffee. Prisoners who were healthy enough to work in the local factories also received a lunch consisting of a small boiled potato and a bowl of soup. The night fare was a turnip or vegetable soup.

Since Betsie had been able to smuggle her Bible into the camp, each night she and Corrie read from the precious book while other women crowded around them to pray and listen. Within a short time, two services were required to accommodate the women who pressed in to hear daily encouragement.

From Thessalonians Betsie read, “Rejoice always…Give thanks in all circumstances,” and it was apparent from Corrie’s stare that she was wondering what there was to give thanks for in that God-forsaken place. Betsie reminded her to be thankful they were together, and for their Bible. Betsie hesitated, “And we give thanks for these swarms of fleas that infest the straw in the barracks.” The flea infestation was so severe the prison guards refused to enter the building, giving Betsie and Corrie the opportunity to conduct their secret Bible studies each night. A bit indignant, Corrie quipped, “Betsie, there is no way that even God can make you grateful for fleas.” But they stood there and gave God thanks for the fleas.

Weakened by the deplorable conditions, Betsie died on December 16, 1944. Before she died, she admonished Corrie, “We must tell them what we learned here. After the war we must travel the world telling them how good God is. They will listen Corrie, because we have been here.” Ten days after Betsie died, Corrie, because of a clerical mistake, was released from Ravensbruck.

For over thirty years after the war, Corrie ten Boom traveled the world telling the story of their prison experience and about the goodness of God. Her books The Hiding Place and Tramp for the Lord became international best sellers. It is estimated that the ten Boom family saved 800 Jews from death in Holland. Corrie died on her 90th birthday, April 15, 1982. There is a traditional Jewish belief that only very special people have the honor of dying on the day that they were born.