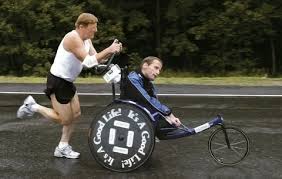 1977, Holland, Massachusetts: Dick Hoyt was exhausted, and he had two more miles to go. His legs and back ached, and his heart pounded. In his entire life, he had never run more than a mile. Yet at age 37, he was running in a 5-mile race. His 15-year old-son, Rick, had convinced him to participate in a benefit run for a high school lacrosse player who had been paralyzed in an accident.

Dick’s challenge was made more difficult because he was pushing Rick in a wheelchair. They finished the race next to last, but when they finally crossed the finish line, Rick said to his father, “Dad, when I’m running, it feels like I’m not handicapped.” On that day, Team Hoyt was formed, and a life-transforming journey was begun.

During Rick Hoyt’s birth in January 1962, the umbilical cord was wrapped around his neck resulting in oxygen deprivation to his brain.  The official diagnosis was spastic quadriplegia with cerebral palsy. When Rick was nine months old, doctors suggested to the Hoyts that they institutionalize him, concluding their assessment with the awful words, “He’ll never be more than a vegetable.”

The Hoyts ignored the doctor’s advice. They were convinced their baby had a level of intelligence because his eyes followed them around the room. They found hope at Children’s Hospital in Boston where they met a doctor who encouraged them to treat Rick like any other child. Judy Hoyt spent countless hours teaching Rick the alphabet. At age 11, he was fitted with a computer, and by pecking out words on a keyboard, he was able to communicate verbally for the first time.

Rick’s first words were “Go Boston Bruins.” The computer enabled Rick to go to public schools, and he graduated from Boston College in 1993 with a degree in special education. Later he worked at Boston College helping develop communication systems for people with disabilities.

After running that first race in 1977, Dick became obsessed with competing with Rick and did so as often as possible. Now 42 years and more than 1,100 races later, Dick, age 79, and Rick, 51, still compete, although Dick has retired from marathon distances. A friend pushes Rick in the longer races. Team Hoyt’s list of events includes 70 marathons, 94 half-marathons, 216 ten-kilometer runs and 247 triathlons.

Team Hoyt finished the Hawaii Ironman Triathlon, one of the most grueling athletic competitions on the planet, six times. In the Ironman, Dick swam 2.2 miles while pulling Rick in a small raft connected by a bungee to Dick’s vest. Upon exiting the water, Dick placed Rick’s 100 pounds on a specially equipped bicycle and rode 112 miles. And following the bike portion, Dick lifted Rick into his wheelchair and ran the final 26.2-mile marathon to the finish line. Their best finish time in Hawaii was 13 hours and 43 minutes.

Team Hoyt has completed the Boston Marathon, their favorite race, 38 times. April 8, 2013, was to be Dick’s last Boston, and a bronze statue honoring the Hoyts was dedicated before the race. However, they were unable to complete the marathon. They were three miles from the finish line when terrorists exploded two bombs near the finish line. Because they were stopped by officials, and unable to complete the race, they returned in 2014 to honor their commitment.

Dick and Rick Hoyt have competed in races around the world. In 1992, they biked and ran 3,735 miles across the U.S. in just 45 days. Rick was once asked if he could give his father one thing, what would it be?” He responded on his computer, “The thing I’d most like is for my dad to sit in the wheelchair and I would push him to the finish line. No question about it, my dad is the father of the century.”

“If you are unwilling to risk the unusual, you will have to settle for the ordinary.”      Jim Rohn