by peteblack4ua@gmail.com | Aug 2, 2021 | Adversity, Chasing Your Dream, Determination Despite the Odds, Iron-willed | 1 comment 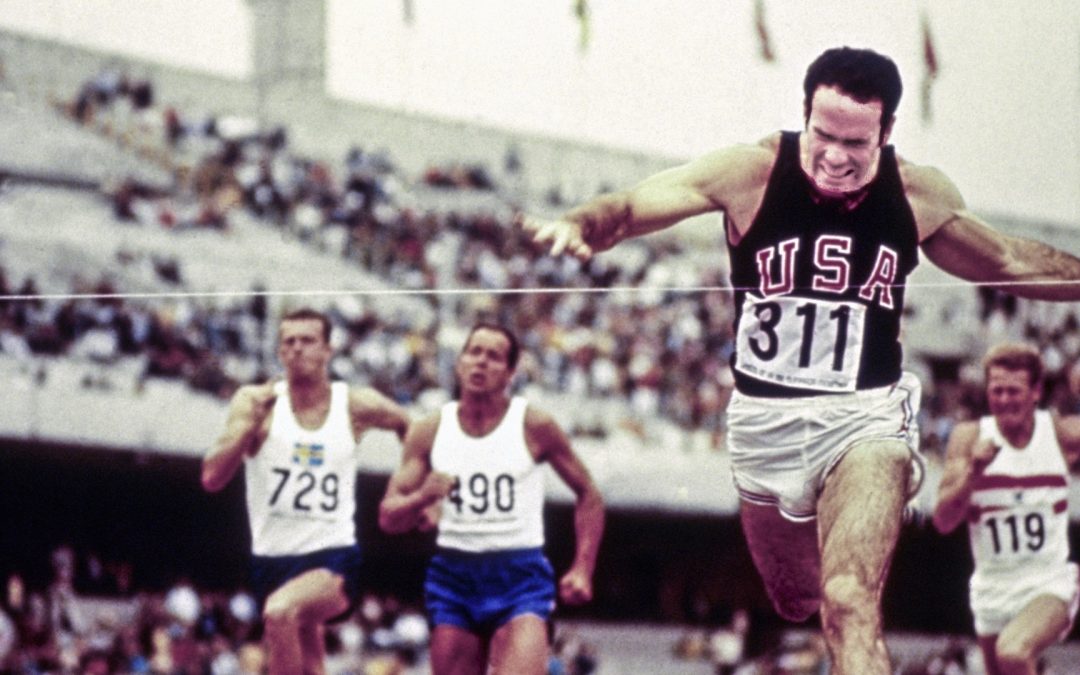 October 19, 1968 – Mexico City, Mexico: A light rain had begun falling in the late afternoon making the mid-50’s temperature seem even colder. The lights were on at Olympic Stadium as the athletes prepared for the high jump, the final event in the two-day decathlon competition. Heading into the high jump, America’s hope for the gold medal, Bill Toomey, held a slight lead over two German competitors.

As Toomey shivered in the rain waiting for the high jump to start, he remembered back four years earlier to the 1964 Olympics in Tokyo. Disappointed that he narrowly missed making the U.S. team, he paid his own way to Tokyo. After having won six consecutive Olympic gold medals, Toomey watched from the stands as America finished 4th in the decathlon.

Born in Philadelphia in 1939, Bill Toomey was 12 years old when he severely cut the muscles and nerves in this right hand while playing with a piece of ceramic pottery. Five surgeries were necessary to repair the nerve damage, but Toomey’s right hand would always be partially paralyzed.

Despite the injury, Toomey went out for the track team at Worcester High School in Worcester, Massachusetts. He never told the coach about his hand out of concern it might be regarded as an excuse. For almost two years, Toomey tried to use his left hand in track events, but finally gave up and competed successfully right-handed.

Toomey attended the University of Colorado where he was a good all-around track and field athlete. He competed in the pentathlon – long jump, javelin throw, 200-meter run, discus throw and 1,500-meter run – because by his own admission he was not outstanding in any single event. While at Colorado, Toomey won four American Amateur Association National titles in the pentathlon.

Bill Toomey returned from Tokyo determined to win the decathlon and bring the gold medal back to the U.S. in 1968. However, the odds of the 25-year-old decathlete winning a gold medal were slim. No one had ever won the decathlon at age 29. Despite the odds, Toomey developed a detailed four-year training plan. He focused on improving his running, hurdles and high jump techniques.

Toomey experienced one setback after another. In 1966, he spent four months in the hospital with hepatitis. Radiation treatments for the liver ailment almost ended his career. After recovering from hepatitis, Toomey got mononucleosis, which sidelined him for two more months. A year later, he was in a car accident that fractured his kneecap. The injury required three months of rehab and valuable time out of his training schedule.

Despite his lack of preparation, Toomey made the U.S. team and arrived in Mexico City in October 1968. On the first day of the decathlon, he set a new world record of 45.68 seconds in the 400-meter run, his best event. However, he had pulled a leg muscle at the tape and it hampered him throughout the second day’s events. Now he faced the high jump, his worst event.

With the rain lightly falling, Toomey’s goal medal was just a successful high jump away. He stood quietly visualizing himself clearing the bar. To win the gold, he would need more than physical talent. He would need to draw on the emotion created by years of adversity.

Toomey missed on his first two attempts to clear the bar. Knowing what was at stake, the stadium was pin-drop quiet as Toomey contemplated his final attempt. The eruption of 72,000 people could be heard for several miles as Bill Toomey easily sailed over the 6’6” bar, a new personal best, to reclaim the gold medal for the U.S. and earn the distinction of  “World’s Greatest Athlete.”

Bill Toomey will always be remembered as one of the greatest decathletes in Olympic history. At 6’ 1” and 190 pounds, he was often smaller than many of the athletes but his heart was bigger than most. Toomey’s success can be attributed less to talent and more to an unwillingness to quit when the cards were stacked against him.