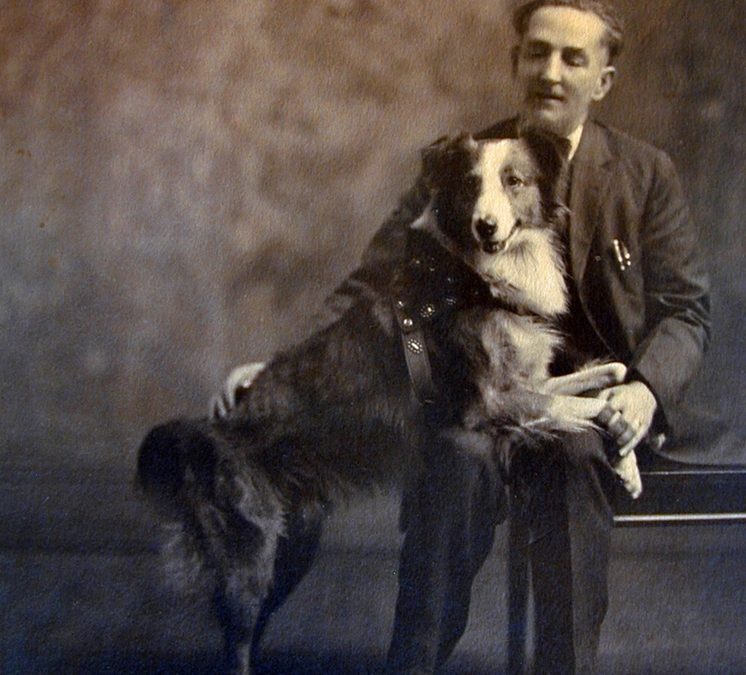 Silverton, Oregon: Although it has been almost 100 years, countless people still visit the canine hero’s grave at the Oregon Humane Society pet cemetery. Since 1932 the annual pet parade has celebrated his story. In Silverton, a dog is more popular than movie star Clark Gable, who grew up there. A 70-foot mural in downtown Silverton tells Bobbie the Wonder Dog’s incredible story.

The Scottish Collie was born in 1921 and purchased for $5 by Frank Brazier, owner of the popular Reo Café on Main Street. Intelligent, rambunctious and loyal, Bobbie captured the hearts of the Braziers.

In August 1923, Frank, Elizabeth and their daughters, Leona and Nova, took a vacation and drove from Silverton to Wolcott, Indiana, to visit relatives. Bobbie happily went along. He perched on top of the luggage in the back seat of the Overland Red Bird Touring car.

On August 15, while Frank was gassing up his car in Wolcott, Bobbie was attacked by three dogs. The last time Frank saw him, he was running away being chased by the dogs. That night Frank kept people awake in Wolcott as he drove the streets calling and blowing the horn for Bobbie.

The next day, he ran an ad in the local paper offering a reward for Bobbie’s return. After frantically searching for a week, the heartbroken family began the long ride home to Oregon. They left instructions to send Bobbie back on the train if found, but they never expected to see him again.

Based on documented sightings, Bobbie roamed northeast Indiana for several months, apparently looking for a scent of the family. From mid-August until mid-November, he wandered in ever-widening circles. Then apparently his internal radar, his homing instincts awoke. Bobbie began a northwest trek.

A week before Thanksgiving, he showed up at the home of Ida Plumb in Des Moines, Iowa, about 400 miles west of Wolcott. Bobbie greeted her at the door by offering his paw for a handshake. The Plumb family fell in love with the collie. Bobbie, now well-fed, stayed for a week before heading west.

The determined dog was next confirmed 600 miles away in Denver, Colorado, in early December. According to Carrie Abbee, “A large collie showed up at our house and had dinner with us.” The Abbees had lost their 14-year-old collie, Wonder, exactly three months earlier. Bobbie left the next morning.

Over the next 1,250 miles Bobbie’s exact course is unknown as he began crossing the Rocky Mountains, passing over the Continental Divide, and then through the treacherous Cascade Mountains in Oregon during the middle of a brutal winter. It took him about two months, but remarkably he survived.

In early February, Bobbie showed up at the home of Mary Elizabeth Smith, an 80-year-old Irish woman in Portland, Oregon. Then sufficiently recuperated after a week, he traveled the final 75 miles to Silverton.

On February 15, 1923, six months to the day after Bobbie got lost, he arrived in Silverton. Nova saw a dog that was a dirty, mangy, bag-of-bones walking down Main Street. She didn’t recognize him at first, then she squealed when she realized it was Bobbie. Despite his condition, when Nova opened the door, Bobbie raced into the cafe to find Frank.

The Silverton Appeal-Tribune published “Bobbie the Wonder Dog’s” story, and the collie quickly became a national celebrity. He received hundreds of letters, including those from people along the route who had fed and sheltered the collie during his journey. This information helped the Oregon Humane Society determine Bobbie’s most likely route.

Bobbie’s extraordinary odyssey covered 2,550 miles across seven states. His incredible journey took him over two formidable mountain ranges and across numerous rivers, including the Mississippi, Snake and Columbia. The story inspired movies and books. Three decades later, Bobbie’s story was the basis for Lassie, a popular TV series in the 1950s and 1960s about a collie.

Why was a Scottish Collie a national sensation? Why do people still visit his grave and participate in parades almost 100 years later? Bobbie’s journey symbolizes those traits we admire most in others – surviving against the odds, dogged determination, love and undying loyalty. “Collies don’t surrender,” according to Frank Brazier. “They don’t give up.”