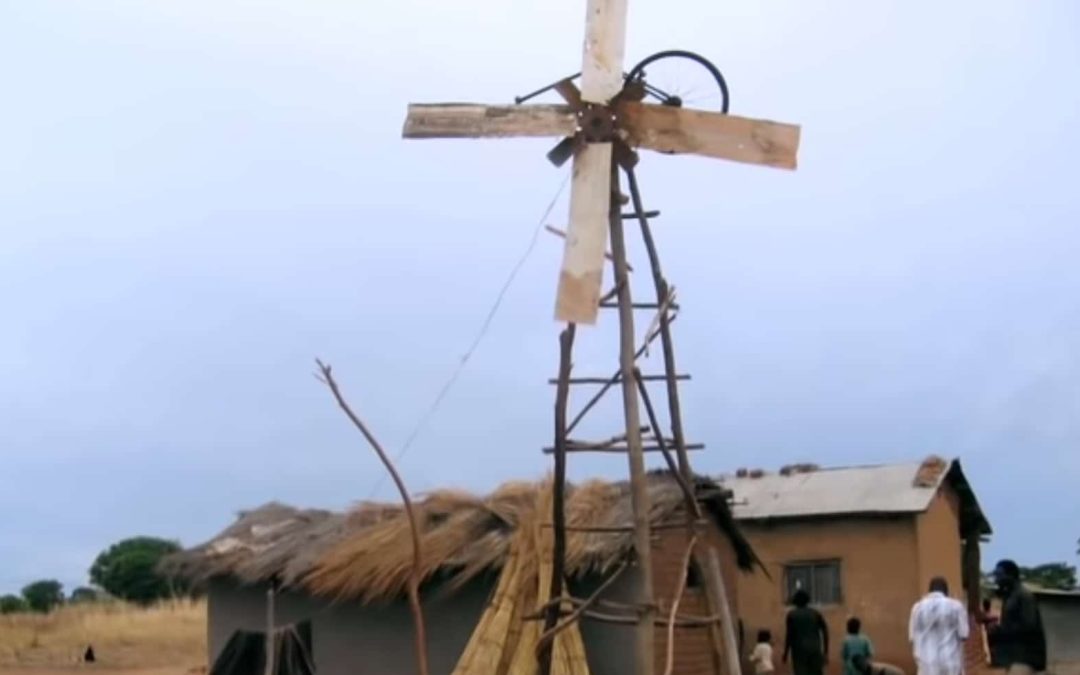 “Here’s to the crazy ones, the misfits, the rebels, the troublemakers, the square pegs in round holes – the ones who see things differently. Because the people who are crazy enough to think they can change the world are the ones who do.”   Steve Jobs

2002 – Mastala Village, Milawi, Africa: The people in his African village called him “misala,” the crazy one. The first time William Kamkwamba saw a picture of a windmill, he was in the small library in the neighboring village of Wimbe. The 15-year-old wasn’t entirely sure what it was, or how it worked, but a dream was born that day to build a wind machine for his village.

William was born in Malawi in southeast Africa. With an annual average income of $160, it is one of the 10 poorest and least-developed countries in the world. His father, like most men in the village, made his living farming a small plot of corn and tobacco with a hoe. There was no electricity or running water in their small thatched-roof, dirt-floor hut. The family diet consisted of a porridge made from corn and an occasional chicken at Christmas.

William dropped out of school in the ninth grade because his family could not pay the tuition. Later that year, after neighbors died from starvation in yet another severe drought, he decided to try to make his wind machine dream into a reality. Inspired by both hunger, and poor lighting from the kerosene lamps in his hut, William regularly walked the three miles to the Wimbe library to learn more about the wind machine featured in the 8th grade textbook Using Energy.

He scavenged around his village for building materials and found a broken bicycle, a tractor fan blade, and an old shock absorber. In a neighboring village, he unearthed an old car battery that he would use to store the electricity. He cut down blue gum trees to fashion into the legs for his wind machine.

Using a flat head screwdriver, the only tool that he owned, William began to assemble his invention as the neighbors watched and worried about his machine. They feared his strange electric wind invention would cause bad magic, resulting in more drought and famine in their land. William’s father and mother shared these concerns. Why didn’t William act like the other boys his age and help his father with the farming?

After many failed attempts, William’s 15-foot-tall windmill finally worked. It generated enough electricity to operate two light bulbs and two small transistor radios. Encouraged by his success, William built a solar-powered water pump to supply the first drinking water to the village, and he made two other windmills, the tallest 39 feet, to supply power for the small village.

In 2010, William was one of four recipients of the prestigious GO Ingenuity Award, a prize awarded to inventors to promote the sharing of their innovations and skills with youth in developing nations. In 2014, William graduated from Dartmouth College, one of America’s top universities. He has returned to Malawi and is working on other inventions to help his country. Those in Mastala no longer consider William Kamkwamba the crazy man – he is a national hero.