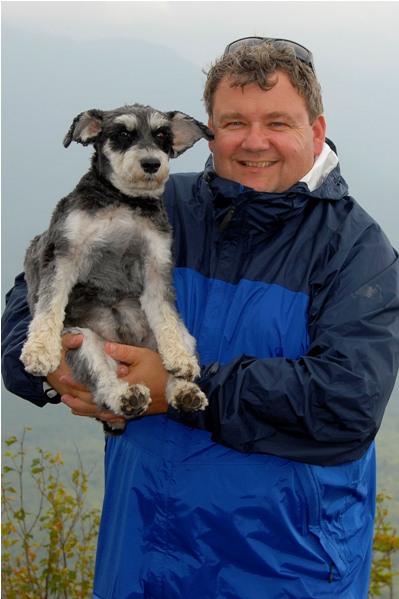 May 2012 – New Jersey Schnauzer Rescue – Fanwood, New Jersey: William had been rescued from a kill shelter an hour away. He had been abandoned. At 15, he was deaf, almost blind and his arthritic hips made it difficult to walk. Hopeless, he lay in his cage at the rescue. Old broken-down dogs weren’t popular adoptions.

Six hours away in Jackson, New Hampshire, Tom Ryan saw the dog on Facebook. He read the posts about how sad it was that William had been given up on at his age. Tom had a soft spot for dogs, especially Schnauzers. His 10-year-old miniature, Atticus Finch, was his soul mate.

At 50, Tom had never been married. As a journalist he founded a newspaper, Undertoad, in Newbury, Massachusetts, in the late 1990’s. The bi-weekly editorial journal had a circulation of 2,300 in a town of 18,000. Tom was a hard-nosed, call-it-like-you-see-em writer whose editorials did not win him many friends. In 2007, tired of the harassment from the community, Tom sold the paper and moved to the White Mountains of New Hampshire.

In 2010, after the death of a close friend, Tom decided to pay tribute to her. He committed that he and Atticus would climb all 48 peaks above 4,000 feet in the White Mountains, twice during one winter. The money they raised went to a local animal shelter. Tom’s book about the experience, Following Atticus, became an international bestseller.

The Schnauzer Rescue advertised William as a sweet old dog that got along well with other dogs. There was something about the dog that made Tom’s heart ache. A friend advised him that the dog would be both expensive and frustrating. A week after seeing William’s picture on Facebook, Tom drove 400 miles to adopt the old dog.

On the drive home William snapped at Tom and Atticus several times. At a rest stop an hour from Jackson, the dog bit Tom’s thumb, drawing blood. Already, Tom was questioning his decision and thinking about euthanasia. During the first week, William bit Tom several more times, and there was the incontinence to deal with. Atticus had only had one accident in 10 years. William peed, and worse, on the floor multiple times each day.

Rather than anger, Tom felt empathy toward William. From having volunteered at nursing homes, Tom knew how important it was for elderly people to die with dignity. William didn’t choose to be neglected and abandoned, nor did he ask for the pain from arthritis or rotten teeth. Tom determined to provide the old dog with a place to die with dignity.

A vet removed 10 of William’s rotten teeth and suggested a medicine for the arthritis pain. By the end of a month, William, who Tom now called Will, was walking better and his anger began to subside. Soon he abandoned his small bed near Atticus to sleep by Tom’s bed. Will was deaf, but he loved the vibration from music, especially classical music, and he loved the smell of flowers.

Tom posted pictures and updates of Will on his Facebook page. There was Will tucked in his bed under a blanket listening to music and Will with a bouquet of flowers nearby. Then came Will’s Wisdom, a daily inspirational quote for Will’s Facebook followers. Tom sold Will coffee cups and t-shirts to raise money for the animal shelter. Will became a Facebook celebrity.

Tom’s kindness transformed Will into a lovable, gentle old dog that loved to snuggle. The experience transformed a crusty old journalist, too. Will recovered enough that he was able to climb several 4,000-foot peaks with Tom and Atticus. Will’s last 18 months with Tom were more than either could have hoped for.

When the seizures became regular Tom knew it was time. During Will’s last two weeks more than 100,000 people checked on him via Facebook. He died in November 2013 surrounded by a living room full of flowers and more than 30 Afghans and quilts sent from around the world.

On the wall in Tom’s office hangs Will’s tiny red coat and collar. It serves as a regular reminder that it’s never too late to love and trust again.