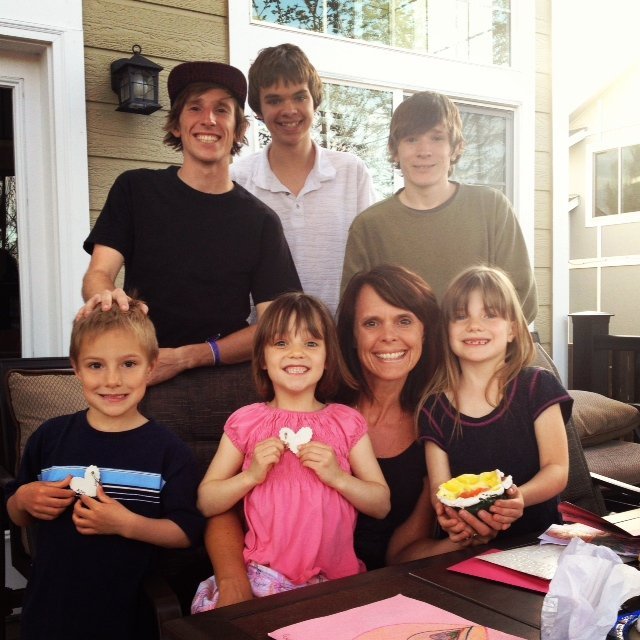 November 2015 – Highlands Ranch, Colorado: Michele Cushatt had enjoyed a wonderful dinner at a favorite restaurant on a beautiful fall evening. It was her first time out in months. After dinner, Michele bumped into an old friend outside the restaurant. Their conversation was interrupted when the friend’s 4-year-old daughter innocently looked up at Michele and asked, “Why do you talk funny?” Michele teared up. Her friend apologized.

Michele was born in 1971 a year after her father returned from Vietnam. His war trauma resulted in PTSD, binge alcoholism and a broken home. At 21, Michele married an abusive husband and at 27 experienced a devastating divorce. She remarried and had three boys. When the boys were school age, the Cushatt’s adopted three elementary school children from an abusive home.

Michele started a Bible study with six ladies in her living room, which grew to 90 women meeting at church every week. An outstanding communicator and teacher, Michele’s attendance at a communication conference opened the door to a speaking career. She was a communication consultant by her mid-30s and traveled the country training speakers for companies.

In 2010, the communication coach was at the pinnacle of her career when she got a phone call. “Michele, I’m sorry,” the doctor said. “It’s cancer.” The little sore on Michele’s tongue turned out to be more than the “nothing” they thought it would be. It was a squamous cell carcinoma, but they had caught it early. Two years later, the cancer came back, but once again they detected it early and it was treatable.

In 2014, on the Tuesday before Thanksgiving, 43-year-old Michele had just packed her six children off to school when the phone rang. There was no good news this time – no promises of a cure. Instead, there was a nine-hour surgery to remove two-thirds of Michele’s tongue and six lymph nodes.

Doctor’s made an incision on Michele’s left arm from her wrist to her elbow and used tissue and blood vessels to rebuild her tongue. They also used skin from her left thigh to reconstruct her mouth. There was a six-inch scar from Michele’s chin to her ear to remove the lymph nodes.

In the months following, Michele received large doses chemotherapy and radiation to her face and neck. At one point, the radiation went directly into her mouth. She was on a feeding tube for five months and often depended on narcotics when the pain from the severe burns on her throat and esophagus got to be too much.

Michele had made a living with her voice and the carcinoma took most of it away. Cancer left her with a stiff, hard-to-move tongue, difficulty eating and drinking, only 20% of her taste buds and a permanent lack of saliva. Initially, Michele’s vocal cords didn’t work and speech therapists questioned whether she would ever talk. There was a journey to learn to speak, eat and drink again.

Alone and in constant pain, Michele pleaded, “God, where are you? Are you mad at me? Did I do something wrong?” She struggled to find God when she needed him most.  Thousands prayed, but God seemed nowhere to be found. Michele almost reached her end. Months of fighting for her life zapped her determination and hope. Many times she came dangerously close to killing herself with an overdose of pills. It was in her darkest moments that Michele realized God was there beside her.

“We equate the presence of pain with the absence of God,” says Michele, “but I found God in the midst of my pain. I discovered that from Genesis 2 to Revelations 22, God is all about being with us. I learned that God is always with me, regardless of the circumstances. When my world was shaking, I found unshakable ground.”

Today, 50-year-old Michele Cushatt has returned to the speaker’s circuit. She is a highly sought-after speaker who shares her miraculous story. She has written two books about her journey, including Relentless: The Unshakable Presence of a God Who Never Leaves. Though her cancer has been an incredibly difficult struggle, God has used her story to touch countless lives.