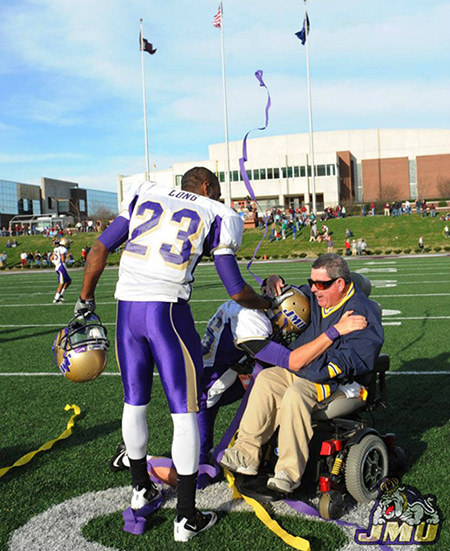 December 31, 1967 – Abingdon, Virginia: Five-year-old Doug Blevins and his father watched on TV as the Green Bay Packers beat the Dallas Cowboys in the inaugural NFL championship game, the coldest game in league history. On that cold Sunday in the foothills of the Blue Ridge Mountains, Doug started dreaming of being a football coach. And not just any coach, an NFL coach.

Doug’s mother, Linda, figured his dream was a fleeting childhood fantasy, but the older he got, the more obsessed Doug became. Because he was born with cerebral palsy and would spend his life in a wheelchair, Linda knew the situation’s likely outcome. She tried her best to steer Doug away from coaching, but she was unsuccessful.

When the small wheelchair-bound child talked about becoming a coach, teachers and friends smiled and nodded their heads. It was all Doug ever talked about. He wrote to every NFL head coach asking for coaching information. Doug’s dream caught fire when Dallas Cowboy’s Coach Tom Landry, the only coach to respond, sent a playbook and a coaching guide.

When he was a student at Abingdon High School, Doug started coaching the kickers. By then, he had read and watched everything he could find on kicking a football. Because of Doug’s success, his story spread. After high school he landed an internship to work in the football department at the University of Tennessee under legendary coach Johnny Majors. Doug later transferred to East Tennessee State University, where he worked with the kickers and pursued his dream.

In 1994, 31-year-old Doug landed a job with the New York Jets as a kicking adviser making $10,000 a year. The job didn’t pay the bills, but Doug didn’t care. He was in the NFL. In the off-season, he conducted kicking camps at his old high school to supplement his income.

After two years with the Dolphins, Doug moved to the New England Patriots’ coaching staff. While there, he received a video from a kicker at South Dakota State University, Adam Vinatieri, who dreamed of kicking in the NFL. Desperate for help, Vinatieri spent months in Abingdon with Doug. At the end of every practice session on the high school field, Vinatieri kicked a 48-yard field goal to ‘win the Super Bowl.’

On Feb 3, 2002, Doug watched with tears in his eyes as Vinatieri booted a 48-yard field goal for the Patriots with six seconds left to beat the St. Louis Rams in the Super Bowl. Vinatieri’s kick brought even more notoriety to Doug’s unique ability to develop kickers. Soon parents across the country were bringing their children to Abingdon High School to be instructed by Doug.

During his four decades of coaching, Doug Blevins has coached and mentored 26 former and current NFL kickers and punters. His list of kickers includes Vinatieri, the second-best kicker in NFL history and Justin Tucker, the Baltimore Ravens kicker, the most accurate kicker in NFL history. In 2013, the kid who never kicked football, and the first disabled coach was nominated for the NFL Hall of Fame.

Today, 58-year-old Doug Blevins is the kicking coach at East Tennessee State University, his alma mater. He still runs his own kicking consulting company. In his office are Super Bowl-winning footballs, an NFL Hall of Fame nomination, awards from high school and college kickers and other football memorabilia. Those who dream of punting or kicking in college, or the NFL, come from all over the world to learn kicking lessons at Doug’s wheelchair.

“Most people automatically assumed that because I had cerebral palsy, I could not or should not have pursued a coaching career. I was successful because I never listened to those people.”                   Doug Blevins