by peteblack4ua@gmail.com | Mar 13, 2018 | Hanging on to Hope, Rising Above Circumstances, Tests and Trials 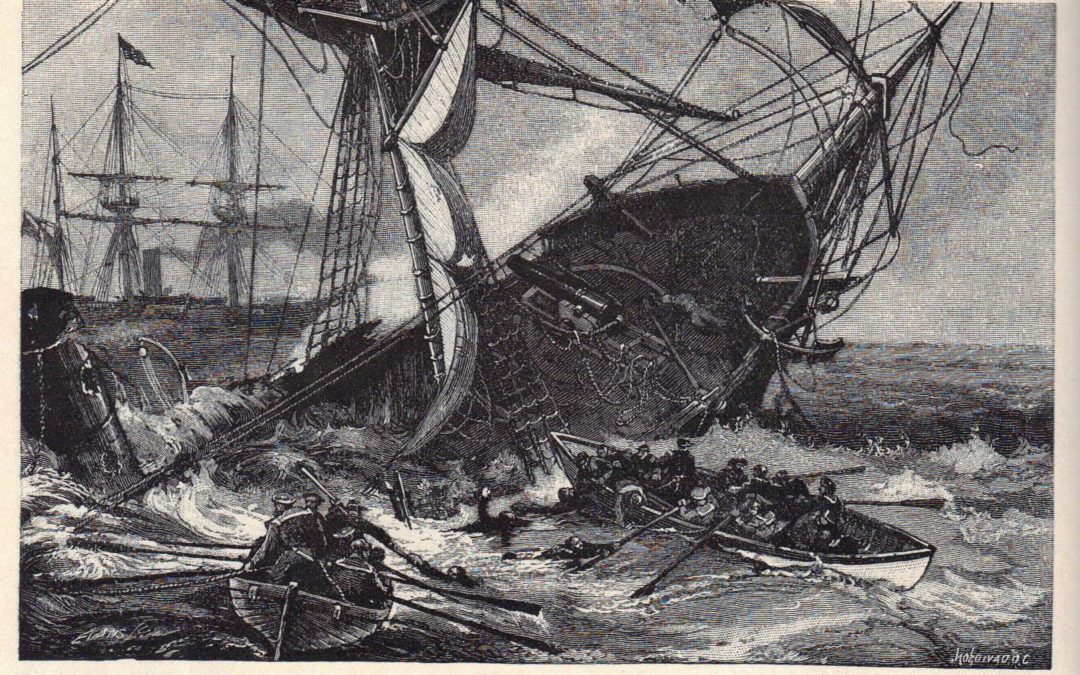 The French luxury steamship SS Ville du Havre sailed from New York for Paris on November 15, 1873 with 313 passengers and crew. At 2:00 am on November 22nd, while in the mid-Atlantic, the ship was almost broken in half when rammed broadside by the Scottish ironclad sailing ship Lochearn. The Ville du Havre sank in twelve minutes. A total of 226 passengers drowned. Sixty-one passengers and twenty-six crewmen were rescued and taken on board the Lochearn, including a young woman named Anna who was found unconscious floating on a plank of wood.

Horatio Spafford had slept very little since reading in the Chicago newspaper of the Ville du Havre tragedy. His wife Anna and their four daughters had been passengers on the ship. In his prominent Chicago law office, Spafford was in agony. He anxiously waited for information about their status. He hoped and prayed for the best, but he anticipated the worst.

When at last a telegram arrived nine days later from Cardiff, Wales, it was from his wife Anna. The short telegram, “Saved alone. What shall I do…” brought Spafford to his knees. His daughters – Annie – age 11, Maggie – age 9, Bessie – age 5, and Tanetta – age 2, had drowned in the tragedy and Anna was in complete despair and all alone in Wales.

Horatio Gates Spafford was born in Troy, New York in 1828. In 1861, he married Anna Larson from Norway. During the 1860’s, Spafford became a distinguished attorney in Chicago, becoming the senior partner in the law firm Spafford, McDaid, and Wilson, which he founded. With real estate booming in Chicago, Spafford invested heavily in property along Lake Michigan, only to lose most of his investments in the Great Chicago Fire of 1871. Following the fire, good friends, like noted Chicago evangelist Dwight L. Moody, helped Spafford get through this very difficult period in his life.

In the fall of 1873, Dwight Moody was invited to preach a series of revivals in England and Spafford decided this would be a good opportunity to take his family to Paris for vacation, and then travel to England to hear Moody preach. He purchased tickets for himself and his family on the Ville du Havre sailing from New York in mid-November, only to discover that he would need to remain in Chicago to finalize a business deal. Anna agreed to go ahead with the girls as scheduled.

After finally receiving Anna’s telegram from Wales, Spafford immediately left Chicago and boarded the next ship from New York headed to England to bring his wife home. While on the Atlantic crossing, the captain of the ship summoned Spafford to the bridge to let him know that they were passing over the spot where the tragedy had occurred.

Tossed like the ocean waves, between his unbelievable loss and his steadfast faith, Spafford then returned to his cabin and penned the lyrics of the great hymn It Is Well With My Soul. For over 140 years, these words have been an inspiration to millions during times of grief. The words that Spafford wrote that day are found in 2 Kings 4:26. They echo the response of the Shunammite woman to the sudden death of her only child. When questioned about her awful situation, she maintained that, “It is well.”

Horatio and Anna Spafford had three more children. In 1881, he gave up his law practice and the family moved to Israel, where along with several other families, they founded the American Colony, a philanthropic ministry to serve the needs of the Christians, Jews, and Muslims. Horatio Spafford died in October 1888 and is buried in Mt. Zion Cemetery in Jerusalem.