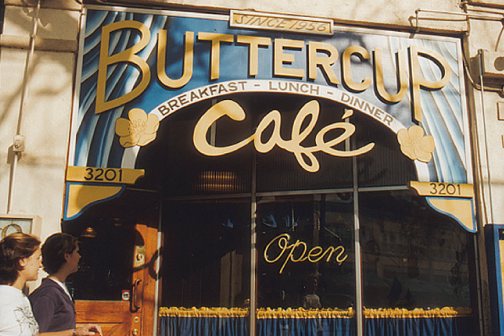 1980 – Buttercup Bakery – Berkeley, California: After six years of waitressing at the Buttercup Bakery, 29-year-old Suze Orman knew she could do more than wait tables. Over a cup of coffee, she shared her dream about having her own restaurant with Fred Hasbrook. When Fred paid for his meal, he left Suze a check for $2,000 and a note saying, “This is for people like you so that your dreams can come true. To be paid back in 10 years, if you can, with no interest.”

Susan Lynn Orman never figured she would amount to anything. She was born in June 1951 in Chicago. As a little girl, she had a speech impediment and later in elementary school, her reading scores placed her at the bottom of the class. Despite mediocre grades in high school, she was accepted to the University of Illinois at Urbana-Champaign. Her parents could not afford to pay for college, so she worked seven days a week in a dormitory cafeteria to support herself.

Orman dropped out of college in 1973, one language course short of her social work degree. She borrowed $1,500 from her brother, bought an old Ford van and set out with $300 and two college roommates to tour America. They ended up in Berkeley, California, where Orman got a job waitressing at the Buttercup Bakery making $400 a month. In 1976, while working there she took a Spanish class at Hayward State University to complete her college degree.

Although Suze told the Merrill Lynch broker that she only made $400 a month and needed the $50,000 to start a restaurant, he made a high-risk investment. Within three months he lost all her money, so she figured she could be a stockbroker too – she reasoned all they did was make you broker.

Suze got an interview at the same Merrill Lynch office that lost her money. Needing a woman on the staff, they hired her. When the boss told her she probably would not last six months, Suze was determined to prove him wrong. She read Barron’s Magazine, the Wall Street Journal and any financial information she could find. To her boss’s surprise, she passed the licensed stockbroker financial exam.

Suze’s personality and common sense approach to investing made her popular with her clients. She remained at Merrill Lynch until 1983, when she joined Prudential Bache Securities as Vice-President of Retail Customer Investments. In 1987, she left Prudential and founded the Suze Orman Financial Group in Emeryville, California. She managed the firm until 1997.

The former waitress at the Buttercup Bakery is an author, financial advisor, motivational speaker, and television show host. Suze has written ten books on financial planning including bestsellers Nine Steps to Financial Freedom and You’ve Earned It, Don’t Lose It. In 2002, the Suze Orman Show began airing on CNBC. A frequent TV financial commentator, she has hosted seven PBS specials on her books.

Suze Orman paid back the $50,000 that Fred Hasbrook and others donated toward her restaurant. Although Fred passed away in 1985, she will always be grateful to the man who believed in her enough to give his hard-earned money for her dream. In 2015, Suze retired and lives on a small private island in the Bahamas where she spends her days fishing.