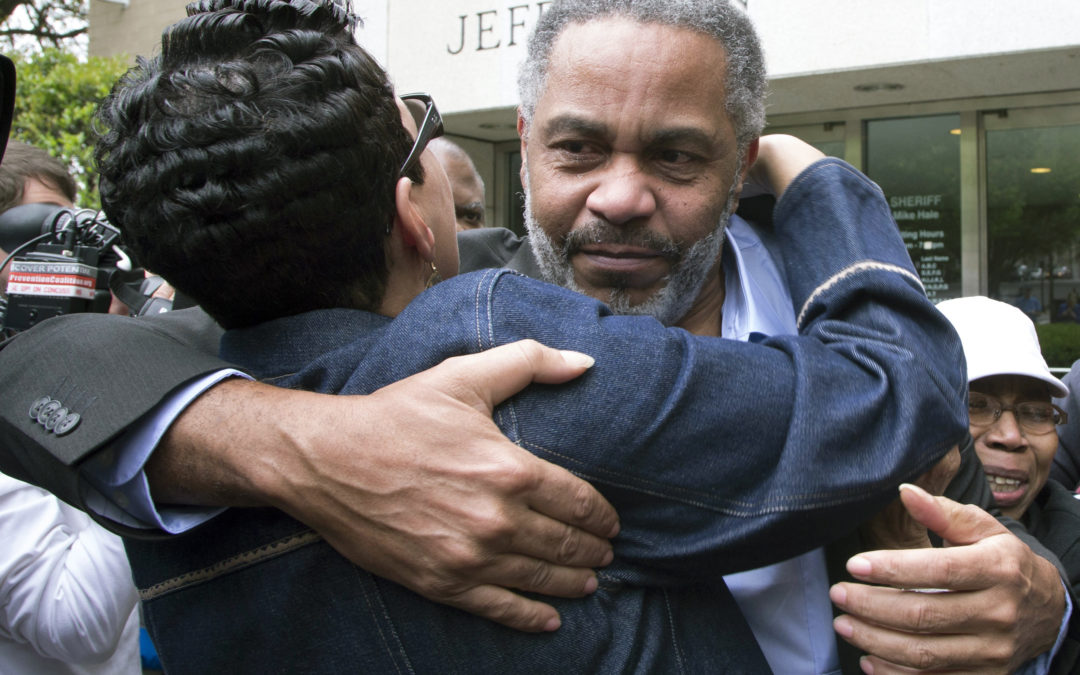 June 1989 – Death Row, Holman Prison – Atmore, Alabama: Thursday was execution day on death row. Ray lay awake in his five by seven-foot cell located 30 steps from the death chamber where the electric chair, “Yellow Mama,” sat. He couldn’t sleep, because the prisoner two cells away sobbed all night. Tomorrow, he would make the death walk.

Anthony Ray Hinton grew up just outside of Birmingham, Alabama. His senior year in high school he was one of the top ten baseball players in the state, but there were no scholarship offers. Ray went to work in the West Jefferson County coal mines. At age 28 he still lived with his mother and took care of her.

In August 1985 Ray was working in a Bruno’s grocery store warehouse in Bessemer 15 miles outside of Birmingham when a Quincy’s Restaurant manager was robbed and shot in the head. The manager survived and identified Ray as the shooter. Ray had never been in trouble before.

The police found an old 0.38 caliber pistol at his mother’s house they claimed had been used in the shooting and also in two earlier murders of restaurant managers. The gun had not been fired in 20 years. Poor, uneducated and black, Hinton was unable to hire a good lawyer. His mother scraped together money for a polygraph test, and Ray passed, but the information wasn’t used in the trial. Ray was convicted and in December 1986 was sentenced to die.

Angry and sullen, Ray Hinton did not talk to the guards or other prisoners for the first three years at Holman. God had forgotten him. Eventually, under his bed, he discovered the dusty Bible his mother had given him. He read about others with trials and tribulations. He lost and found God on death row. Ray realized he had a choice to love, rather than hate – to help rather than do harm.

Ray became a model prisoner. Death row became home for him, and the guards and prisoners became his family. He convinced the warden to let him start a book club. Prisoners on his cellblock read books like “To Kill a Mockingbird” and discussed them in the library.

Ray’s mother visited him every Friday for years until her health became a problem. Ray’s best friend from childhood, Lester Bailey, would drive her down from Birmingham. She never visited without asking, “When are you coming home, baby?” And Ray responded, “Soon, Mama, real soon…I’m coming home mama.” She died in 2003.

During Ray’s first 14 years on death row, a series of half-hearted lawyers handled his appeals. In 2000, Bryan Stevenson, founder and executive director of the Equal Justice Initiative in Montgomery, took his case. It took another 16 years of contested appeals in the Alabama court system until finally, a unanimous vote by the U.S. Supreme Court sent the case back to the Jefferson County Courthouse for a re-trial.

While on death row, Ray had watched 54 men walk past his cell to the death chamber.  Others lost hope and committed suicide. Thursday never came for Ray. On April 3, 2015, almost 30 years after his sentencing, prisoner #Z864 was released when the State of Alabama dropped the charges. They had made a mistake. Lester, who never missed a visit during the three decades, drove Ray to the cemetery, his first stop. He knelt at his mother’s gravestone and whispered, “I’m home, mama. I told you I’d come home.”

Today at age 60, Ray lives in his mother’s old house. He drives to Montgomery a couple days each week to work at the Equal Justice Initiative and he travels the country with Bryan Stevenson sharing his story of love, forgiveness, and perseverance.