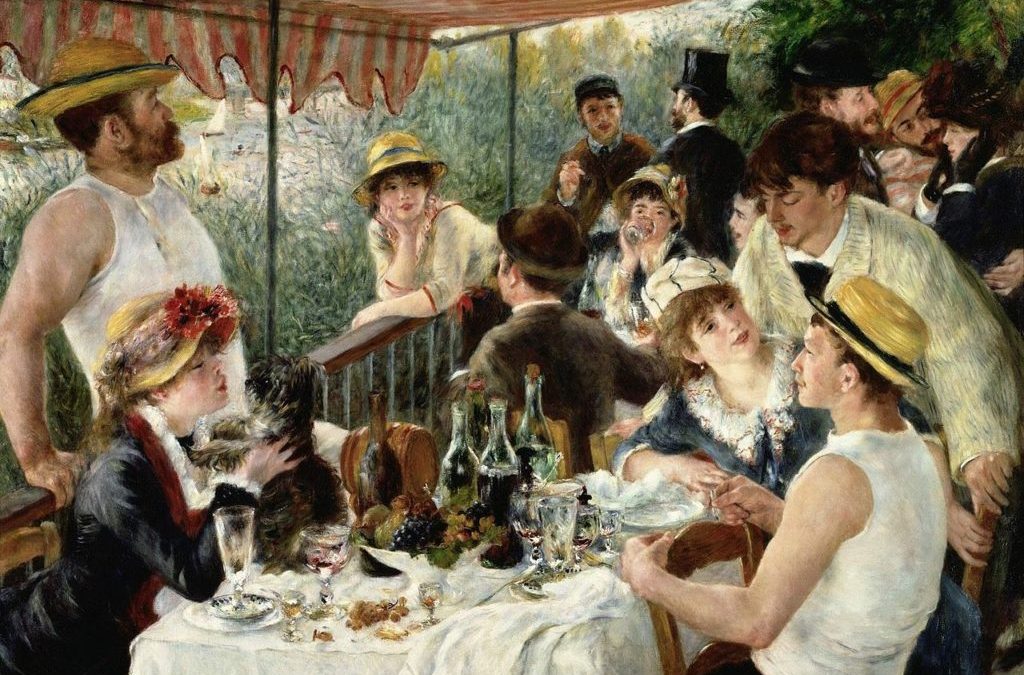 1874 – Overheard in a Paris art studio: “He has no talent at all, that boy! You who are his friend, please tell him to give up painting.” The comment was made by French impressionist painter Edouard Manet to fellow painter Claude Monet. He was speaking of 33-year old struggling artist Pierre-Auguste Renoir. Monet failed to pass along the message to his friend.

It is true that as a young man, Renoir’s gift was singing. A teacher encouraged him to pursue a musical career, but he loved to paint. As a young teen, he dropped out of school to help with family expenses and took a job in a porcelain factory painting china plates and saucers. When bored with his mundane work, he strolled across town to the famous Louvre Art Museum for inspiration. In his sketches he imitated the great works in the art galleries.

In the late 1860’s the factory installed a mechanical painting process and Renoir found himself without a job, so he set up his easel on the banks of the Seine River and painted along with other artists. His work was good. His timing was not. In 1870, a two-year war with Germany resulted in an economic depression in France. Money was needed for food, not frivolous paintings.

Success was long in coming for Renoir. New impressionistic art – paintings with lots of colors and outdoor scenery – was slow to capture the Paris art community. When Renoir sold a piece of art, he bought paint for another one. In 1881, after a decade of starving, Renoir’s painting Luncheon of the Boating Party was the rave of the local newspapers. At last, he could pay his bills, no longer dependent on the generosity of friends and art patrons.

In 1891 at age 50, when Renoir had finally earned the recognition he so yearned for, he was diagnosed with rheumatoid arthritis. As the crippling disease progressed and forced him from a cane to crutches, then to a wheelchair, he painted daily at his easel. He took pain relievers sparingly, concerned that they dulled his creativity. His passion provided pain relief and a way to forget his misery.

When Renoir could no longer pick up a brush, he coached his son Coco to dab the brush in the desired color on his palette and place the brush between his gnarled fingers. His claw-like hand was delicately wrapped with cloth to prevent sores. When no longer able to walk or raise his arms, Renoir had a contraption of pulleys, poles, and chains built to bring the larger canvases to his deformed hands.

Over the final two decades of his life as Renoir’s body wasted away his spirit grew larger. With each passing year, his paintings featured an increased usage of dazzling and spectacular colors. Nowhere in his paintings can you see his pain and suffering. He refused to transfer his misery to the canvas.

Renoir enjoyed painting his friends and they admired his eternal optimism. Once when questioned about his good humor, Renoir responded, “There are enough unpleasant things in this world without the need to create more of them.”

Renoir painted into the evening on the last day of his life, December 3, 1919. Age 78, he had lived long enough to see one of his paintings purchased by the Louvre Museum. During his 60-year career, he painted an estimated 4,000 pieces. In May 1990, one of Renoir’s paintings, Dance at Du Moulin de la Galette, sold for $78 million at Sotheby’s New York. The apprentice who Edouard Manet suggested should give up painting is hailed as one of the great masters of the Impressionistic Era.