by peteblack4ua@gmail.com | Sep 3, 2021 | Courage Under Fire, Determination Despite the Odds, Never Give Up | 3 comments 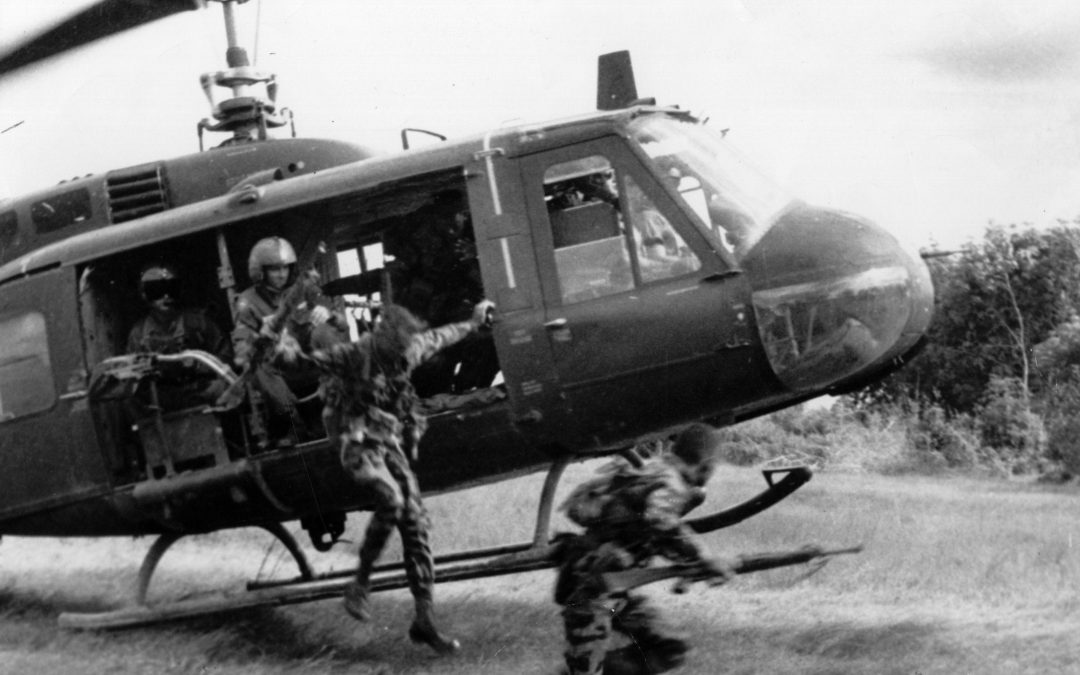 November 14, 1965 – Ia Drang River Valley – South Vietnam: Captain Ed Freeman was the flight leader of the 229thAssault Helicopter Battalion, a 16-helicopter unit whose mission was to drop the soldiers and supplies of the 1st Battalion, 7th Cavalry Regiment into a landing zone on the bank of the Ia Drang River. The first four drops were routine, but on the fifth drop all hell broke loose.

At 2:05 p.m., when the 38-year-old helicopter pilot dropped the soldiers into the small open area, the size of a football field, the North Vietnamese troops were waiting for them.  Machine guns mowed down the young soldiers and showered the aircraft with bullets. Freeman’s chopper was able to lift out of the chaos but when the Huey returned to the staging area 30 minutes away it had 50 bullet holes.

Ed Freeman had grown up on a farm in Neely, Mississippi. At age 13, he decided to become a soldier and a pilot. Four years later, he quit high school and joined the Navy, where he served on a combat ship in the south Pacific in WWII. After the war, Freeman got his GED diploma and joined the Army. He was one of 14 survivors in his unit of 257 soldiers at the Battle of Pork Chop Hill during the Korean War.

In 1954, Freeman returned home and applied to flight school to do what he had always dreamed of doing: flying helicopters. He was rejected because at 6’4” he was too tall. Freeman decided to retire from the military, but a few months later the Vietnam War began and the demand for pilots resulted in relaxed height standards. “Too Tall” got his nickname and his opportunity to fly in Vietnam.

On that November afternoon in 1965, the North Vietnamese attack was so intense that Freeman’s commanding officer shut down the helicopter operation. He asked for a volunteer to fly in and get wounded soldiers out of the landing zone. Freeman was the only one to raise his hand. “I’d dropped the soldiers in there,” he later said, “It was my responsibility to get ‘em out.”

Freeman flew his helicopter into the hot zone for the next eight hours to deliver ammunition, medical supplies and evacuate casualties. On four occasions, Freeman changed helicopters due to damage from machine gunfire. He flew in and out of the landing zone a total of 14 hours that day. At 10:30 p.m., when Freeman made his last pickup to recover wounded soldiers he was assisted by soldiers holding flashlights.

Shortly after the war, Freeman was awarded the Distinguished Flying Cross for his bravery at the Battle of the Ia Drang, but his commanding officer, Lt. Colonel Bruce Crandall was not satisfied. He believed that Freeman deserved the Medal of Honor, the nation’s highest military recognition. After 35 years of lobbying by Crandall, 73-year-old Ed Freeman finally received the Medal of Honor from President George W. Bush at a Whitehouse ceremony in 2001.

The president said, “Capt. Ed Freeman flew through enemy gunfire not once, not 10 times, but 21 times that day. His helicopter brought water, ammunition and medical supplies that saved many lives. Capt. Freeman flew more than 70 wounded soldiers to safety.” At the conclusion of the ceremony, Bush saluted Freeman, “Way to go, Too Tall.”

Freeman retired from the Army in 1967 after 23 years. He moved to his wife’s hometown of Boise, Idaho, where for two decades he flew helicopters for the Department of the Interior fighting fires and herding wild horses. The war hero died from Parkinson’s disease in 2008 at age 80.

The survivors from the 7th Cavalry will never forget one of the fiercest battles of the Vietnam War, nor the hopelessness of almost certain death, but they will also always remember the unmistakable rhythmic, thumping sound of Ed Freeman’s Huey coming to rescue them.