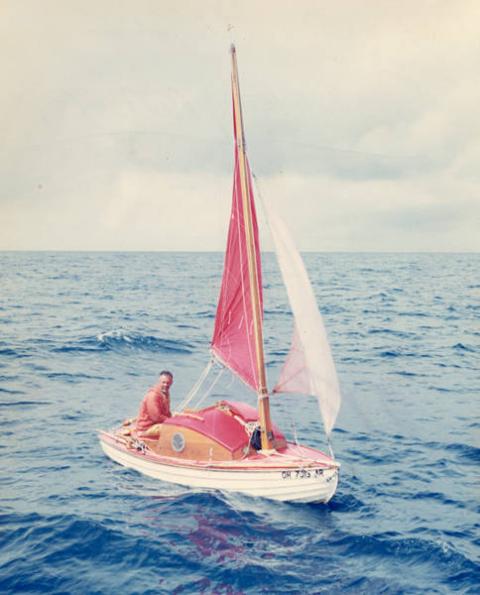 June 1, 1965 – Falmouth, Massachusetts: The 13-foot sailboat, Tinkerbelle, quietly set sail for its destination 3,200 miles away in Falmouth, England. If successful, it would be the smallest sailboat to cross the Atlantic Ocean. At the helm was Robert Manry, a copy editor who was bored with his job at the Cleveland, Ohio, Plain Dealer newspaper.

Manry learned to sail as a boy while growing up in India. After reading Josh Slocumb’s book Sailing Alone Around the World, he too became fascinated with the idea of sailing around the world. In 1959, Manry saw an ad for a 30-year-old,13-foot whitecap class sailboat and bought it for $160.

He rebuilt the boat and pulled it behind the family station wagon to lakes in Ohio and Pennsylvania on summer vacations. For three decades, Manry quietly dreamed of sailing across the Atlantic.On his 47th birthday, he took a three-month sabbatical from his job and decided to give it a try.

Manry was afraid, not of the ocean, but that people would try to talk him out of his crazy idea. He only told his wife, Virginia, and a few close relatives about the trip. As he shoved off from the Falmouth Marina, Manry handed the harbormaster a letter addressed to his newspaper employees informing them that he was sailing to England. The Plain Dealer stories began appearing in the paper just a couple of days after his departure. The Manry family articles were a hit with readers and soon other newspapers around the country took a keen interest in Manry’s trip.

By the third night, panic had replaced boredom as Manry maneuvered his little boat across busy shipping lanes trying not to capsize. He tried to sleep in the daytime and sail at night when ships might not see his tiny sailboat. On six occasions storms swept him overboard and a rope tied around his waist was the only thing that saved him. Another storm knocked out the radar. Three times Manry repaired a broken rudder. On his best day, he sailed 87 miles. On other days,Tinkerbelle sat still on a windless ocean.

During the last leg of the journey, Tinkerbelle was reported lost. British Royal Air Force planes were dispatched to search for Manry but after 24 hours there was still no word on Manry’s location. Family and friends in New England feared the worst, but on the second day a search plane spotted the little sailboat.

Robert Manry had no idea that his adventure had become a major story on both sides of the Atlantic. He had left Massachusetts with no fanfare and expected nothing more when he arrived. Tired, cold, 40 pounds lighter, and sleep deprived, Manry simply planned to get a hotel room, a hot shower and a good meal. The next day he would contact the Associated Press to see if there was interest in his story.

On Tuesday, August 17 in the late afternoon, 78 days after setting sail, Tinkerbelle finally began the approach into Falmouth Harbor. To Manry’s amazement, pandemonium greeted his arrival. He agreed to be towed to port due to the congestion created by more than 300 vessels, most with horns blasting, which had jammed the harbor anticipating his arrival.

An estimated 50,000 people waited at the docks to celebrate the modern-day Charles Lindberg. Manry’s newspaper had flown his wife and their two children over for the event. Every major paper on both sides of the Atlantic was there to cover the story.

Robert Manry never returned to his job at the newspaper. Instead, he captured his adventure in a successful book, wrote for magazines, and gave lectures around the country. He died five years later at age 52 of a heart attack.