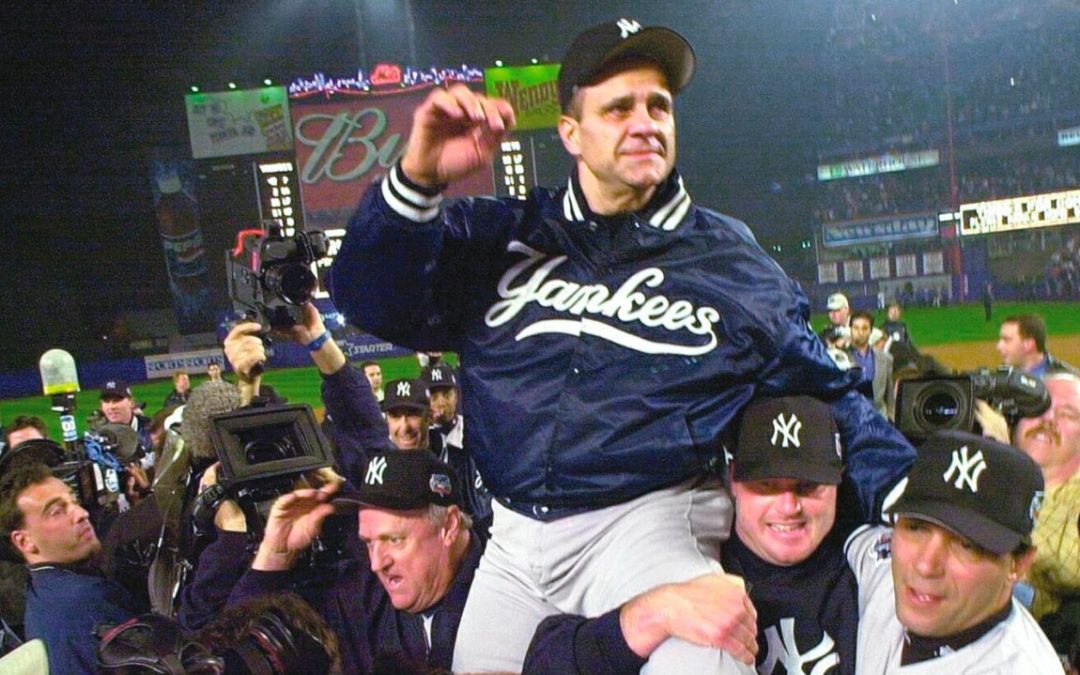 June 16, 1995 – St. Louis, Missouri: Cardinals baseball team manager Joe Torre was at home when he got a call from team General Manager Walt Jocketty saying he was on his way to Torre’s house. Torre told his wife, Ali, “I think we’re getting fired here.” After five straight losing seasons and the team currently mired in a 13-game losing streak, the handwriting was on the wall.

With tears in his eyes, Jocketty told Torre, “Joe, we have got to make a change.” Although not totally surprised, the Torres were hurt. This was the third time Torre had been fired as a big-league manager, but this firing was particularly painful because Torre had once been an All-Star catcher for the Cardinals.

Joe Torre grew up in Brooklyn, New York, and signed a contract with the Atlanta Braves after high school. In 1962 he was second in the Rookie of the Year balloting as a catcher. In a 16-year career with the Braves and the Cardinals, Torre made the All-Star team nine times and was the 1971 National League Most Valuable Player.

Torre got his first big league managing job in 1977 when the New York Mets hired him 45 games into the season. He managed the Mets through five straight losing seasons compiling a dismal 286-420 win loss record before getting fired after the final game of the 1981 season.

A week later, the Atlanta Braves hired him. After one week on the job, General Manager John Mullen informed him, “You weren’t our first choice, but let’s make the most of it.” Despite a winning record and leading the Braves to a National League Division title in 1982, Torre lasted only three seasons before being fired by owner Ted Turner.

After being fired from the Braves, Torre contacted a number of teams about a job but none were willing to take a chance on him. His only offer was from the Cardinals to manage their AAA minor league club. At this point Torre gave up on managing and settled for a television broadcast booth position with the Los Angeles Angels.

Torre spent six seasons covering Angel games, and although it gave him something to do, he never lost his desire to lead a team to the World Series. “I played in the big leagues for 16 years,” says Torre, “But I always wanted to be in the World Series.”

In 1990, Torre was given a third chance to manage when the Cardinals tabbed him to manage their big league club. He led them to a 351-354 record through six seasons before Walt Jocketty showed up at his house in June 1995 with the bad news.

The 55-year-old Torre figured it was “three strikes and you’re out.” A year later he got a call from the New York Yankees, the team he dreamed about while growing up in Brooklyn. Despite blistering criticism from the New York papers, Yankees owner George Steinbrenner hired Torre as manager even with his career record of 894 wins – 1,003 losses.

That year after 31 seasons as a player and manager, Torre finally made it to the World Series and his Yankees beat the Braves to win the championship. He managed the Yankees for 10 seasons, winning four World Series, including three in a row. Joe Torre has more post-season wins (84) than any manager in big league history and in 2014 he was inducted into the Major League Baseball Hall of Fame.

Joe Torre’s advice: “If it’s a tough time right now, don’t look for a reason why it’s happening, just deal with it. Get through it and you’ll be better for it. Move on. Tough times don’t last, but tough people do.”

“I didn’t see it then, but it turned out that getting fired from the Apple CEO position was the best thing that could have ever happened to me. It freed me to enter one of the most creative periods of my life.”           Steve Jobs