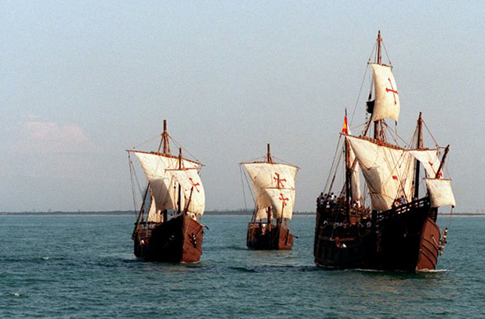 October 10, 1492 – Atlantic Ocean off the west coast of Africa: It had been 34 days since the three small ships left the Canary Islands. The tension and grumbling on board had been building for over a week, and the frightened crew was on the verge of mutiny. The ship’s captain remained resolute and undeterred, confident in his mission to find a westerly sailing route across the Atlantic Ocean to the Orient.

The crew pleaded with the captain to turn back from his foolish mission. After an intense confrontation, a compromise was reached: They would sail west for three more days and if land was not been sighted the captain would turn back. The captain dared not tell the crew that the ships had already passed the point of no return – they did not have adequate supplies to return to Spain.

Christopher Columbus was born in the port city of Genoa, Italy in 1451. By his teen years, the Atlantic Ocean had lured him away from the family weaving business. For years Portuguese ships reached India by sailing east around the tip of Africa, but as Columbus grew in experience as a sailor, he became confident that by sailing west across the Atlantic, a quicker and safer route to India could be found.

In 1484 Columbus first presented his daring and unusual plan to King John II of Portugal. He asked the royal court for ships, men, and supplies. The King’s advisors weren’t sure the plan was possible and turned down the request. Columbus’ next stop for financial backing was at his home port of Genoa, where he was again told no. Columbus then traveled to Venice where skeptical sailing merchants also denied his request.

The following year, Columbus took his project to King Ferdinand II and Queen Isabella of Spain. Ferdinand’s nautical experts rejected the request, but they were so intrigued by the possibility that Ferdinand agreed to pay Columbus a retainer to keep his options open. For seven years Columbus persisted in lobbying at the Spanish court.

Finally, in January 1492, King Ferdinand agreed to provide three ships, supplies and approximately 95 men for Columbus’ voyage. On August 3, 1492, Columbus set sail from the Spanish port of Palos de la Frontera. He captained the largest ship, the Santa Maria, which was followed by the smaller Nina and Pinta.

Columbus, keenly aware of the crew’s fears about the voyage, kept two logbooks. One, which he kept to himself, contained the actual distance the ships had traveled. The other, which helped in settling the October 10th confrontation with the crew, reflected a significantly shorter distance. Columbus bought himself three days time, but then what? He knew they had only two options: discover land or die. What he did not realize was that land lay but one hundred miles to the west.

The following afternoon despair turned to excitement when sailors on the Pinta saw a log and a carved stick. A few hours later, the Nina crew saw a plant stalk. They sailed on into the heaviest seas the ships had encountered during the 35-day voyage. At 10:00 P.M., Rodrigo de Triana, aboard the Pinta thought he saw a light, which was shortly confirmed by Columbus from the deck of the Santa Maria. The ships dropped anchor at 2:00 A.M.

On Friday morning, October 12, 1492, Columbus and his men went ashore to discover friendly natives who believed the white men were sent from God. Assuming he had reached India, Columbus named the islands the West Indies. He had actually discovered was an island in the Caribbean Sea, now known as Haiti and the Dominican Republic. Columbus voyage paved the way for later voyages to reach India and his courage earned him a place on the list of the world’s great explorers.