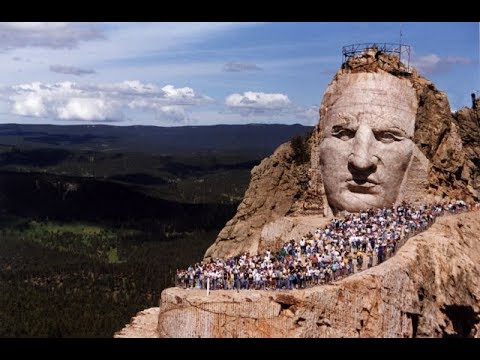 November 7, 1939 – New Britain, Connecticut: Korczak Ziolkowski received a letter from Henry Standing Bear, a Lakota Indian Chief in the Black Hills of South Dakota. It began, “My fellow chiefs and I would like the white man to know that the red man has great heroes, too.” Standing Bear invited Ziolkowski to create the world’s largest mountain monument of legendary Lakota Indian Chief Crazy Horse on Thunder Mountain, South Dakota.

A few months earlier, Ziolkowski got fired from his dream job – working on the team to sculpt four U.S. Presidents on Mount Rushmore, and he figured his sculpting career was over. Ziolkowski was born to Polish parents in Boston in 1908, and although he had no formal training as a sculptor, he began carving wood as a teenager and completed his first marble sculpture at age 24.

In 1938, after his sculpture of Ignacy Paderewski, the Prime Minister of Poland, won first prize at the World’s Fair in New York, Ziolkowski joined the Mount Rushmore project. He lasted a couple of months before the run-in with the project manager cost him his job.

After receiving Henry Standing Bear’s letter, Ziolkowski traveled to meet with the Indian Chief, but almost a decade passed before he agreed to the tackle the project of a lifetime. Located 17 miles from the Mount Rushmore Memorial, the final dimensions of the massive Crazy Horse monument were projected to be 563 feet high and 641 feet long when completed. By comparison, the heads of the four presidents at Mt. Rushmore would fit inside Crazy Horse’s head.

The project officially began on June 3, 1948, when the first blast was made into the mountain. Using a process called precision explosive engineering; Ziolkowski’s first blast removed about 10 tons of rock.

In 1950 Ziolkowski married Ruth Ross, a project volunteer, and they raised ten children, five boys, and five girls while working side-by-side on the project for thirty-two years until his death in 1982 at age 73. At Ziolkowski’s funeral, a letter he wrote to his children 30 years before was shared. “You don’t have to take up this project,” Ziolkowski said, “But if you do decide to take it up, don’t ever let it go.” Ruth became project CEO and seven of the ten children returned to help their mother complete a dream.

Crazy Horse’s head was finally completed in 1998. Ruth managed the project until her death in 2014 at age 87. Today, daughter Monique Ziolkowski is the project manager. Work continues year round and currently focuses on creating Crazy Horse’s arm and his horse’s head, 22 stories above the ground.

The project is a private, non-profit undertaking, funded strictly through memorial gifts. The Lakota Indians refuse to accept U.S. government funding. Throughout the year events such as rodeos, admission to the park, and a nightly summertime multi-media laser show help raise money for the project. More than one million people visit the project each year.

Son Casimir Ziolkowski, who is 63, sums up the spirit of the family’s decision to continue the project, “We decided to take it up. And I’ll be dammed if I’ll ever let go of it. For me, it’s the only job I want to do for the rest of my life.”

The project has no projected completion date. Approximately seventy years after Korczak Ziolkowski promised Chief Henry Standing Bear he would create a memorial to the Lakota Indian Chief who defeated General George Custer at the Battle of Little Big Horn, the dream continues.