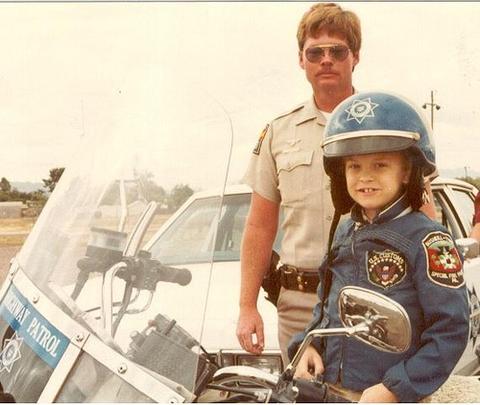 1980, Seligman, Arizona: By the time Frank arrived at the hospital, 7-year-old Chris Greicius had lapsed into a coma. His battle with leukemia was almost over. By the bed hung Chris’s highway patrol uniform, hat, badge and boots. Frank pinned the wings on Chris’s uniform.

Chris roused. “Officer Frank, am I an official Arizona highway patrolman now?” With tears running down his face, Frank responded, “You sure are, little buddy.” Chris died that night. Fulfilling the last wish of a little blond-haired boy was one of the hardest things Frank had ever done.

As a boy, Frank Shankwitz sometimes wondered where his next meal was coming from and where he was going to sleep. He was tugged back and forth between divorced parents but lived mainly with his father in Chicago. When he was 10, his mother abducted him from a school playground and drove to Arizona. It took them two weeks because his mother had to waitress along the way to buy food and gas. They slept in sleeping bags on the ground. According to his mother, they weren’t homeless; they were just camping.

Frank worked two jobs in high school – his job as a cook guaranteed he would at least get one meal each day. His mother worked as a maid at a local motel. They lived in a 1940, 28-foot travel trailer until Frank graduated from high school in 1961. With no money for college, Frank served four years in the U.S. Air Force as a military policeman.

After the tour of duty, Frank and his new wife, Sue, both got jobs at Motorola in Phoenix. He stayed there for seven years before becoming an Arizona Highway Patrol motorcycle patrolman at age 29. In 1976 while chasing a speeding drunk driver near Parker, Arizona, Frank crashed his motorcycle. He was pronounced dead at the scene, but a relentless CPR effort by an off-duty emergency room nurse saved his life.

After being off work for three months, Frank returned to his motorcycle. His near-death experience disturbed him. Why had he been spared? Was there a purpose in it? He loved being a motorcycle patrolman, loved children, and spent his off days teaching bicycle safety in schools or coaching special Olympic children. Frank always got a kick out of showing kids his motorcycle.

In 1980, four years after Frank’s accident, his boss asked him to visit Chris, who had one dying wish – to become a highway patrol officer. It began with Chris sitting on Frank’s motorcycle and wearing his hat. Then Frank arranged for a seamstress to sew a tiny uniform, got Chris a hat, badge and a training certificate. The wing pinning at the hospital made it official for Chris.

Frank and a fellow officer raised $1,500 to travel to a small town in Illinois to ensure Chris received a proper police burial. They borrowed Gold Wing motorcycles to ride at the front of the funeral procession through streets lined with police officers. Chris was buried in his uniform.

On the flight home at 36,000 feet over a Kansas cornfield, 47-year-old Frank knew deep in his soul why his life had been spared. Helping Chris changed Frank’s life and showed him his purpose. A month after the funeral, Frank filed the paperwork to establish the Make-A-Wish-Foundation.

Today, almost 40 years after the first wish was granted, the Make-A-Wish Foundation is a global organization with 45,000 volunteers. The foundation has helped grant wishes for more than 380,000 children with critical illnesses in 50 countries. At 77, Frank Shankwitz lives in Prescott, Arizona, and is one of the most sought after keynote speakers in the world.

“When you become so passionate about something that it consumes you, you’ve found your purpose. Listen carefully; it’s there, waiting for you to finally discover it.”     Frank Shankwitz