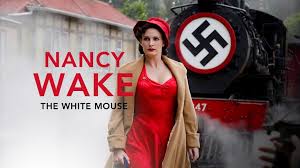 1941 – Marseille, France: Nancy remembered seeing a French woman tied to a stake while a Nazi soldier ripped open her pregnant stomach with his bayonet. German officers stood by smoking cigarettes as the woman bled to death with her two-year-old crying by her side. Nancy also remembered the Gestapo using an axe to behead a friend of hers because he tried to escape.

The images never left her, and Nancy despised Adolf Hitler. She vowed that if she got the chance, she would do everything within her power to hurt the Nazi regime.

Nancy Wake was born in New Zealand in 1912. When she was a child, her father went on a trip to the U.S. and never returned. Nancy left home at 16 and got work as a nurse trainee. She never went back to see her mother. After inheriting 200 pounds from an aunt, she moved to England where she completed a one-year course in typing and shorthand from Queens College in Cambridge.

A London newspaper hired Nancy as a journalist and assigned her to Paris. She loved living in Paris in the 1930s. In 1939, when Britain declared war on Germany, Nancy applied for a military correspondence job on the frontline. She was turned down. In November of that year, she married Henri Fiocca, a wealthy Paris factory owner. Four months later he left for the war.

Nancy borrowed a truck from Henri’s factory, turned it into an ambulance and drove to the war front in northern France. There she put her nursing skills to use.

In 1940 she joined the French Resistance and became involved in the underground network transferring injured soldiers and Jews to Spain and on to England. She helped more than 1,000 people escape. On several occasions, she barely escaped with her life by pretending to be a French housewife. Her amazing ability to scamper away when cornered earned her the nickname “The White Mouse.”

In 1943, at age 31, Nancy was accepted into the French Special Operations as a spy. For 18 months, she learned to kill with her bare hands, guns, knives and explosives. In April 1944, she parachuted into the mountains of German-occupied France. Her mission: To make contact with guerilla fighters and assess their need for weapons, explosives and money. The only woman among 7,000 guerilla fighters in the French Alps, Nancy radioed messages to Allied forces for airdrops.

The White Mouse became a legend across war-torn France. She could make guns and money rain from the sky. Once when her radio broke, Nancy posed as a French farm wife and rode a bike 250 miles round trip in four days to get new radios. When German forces attacked 80 guerillas in a resistance camp, Nancy, with her automatic weapon and a bazooka, led a squad of 10 men to take out a machine-gun post.

On another occasion, when the camp in the mountains was attacked, Nancy helped lead 40 men on a 150-mile walk through the mountains to escape. She also busied herself blowing up bridges and railroads to stop the German advance.

Throughout the war, Nancy’s name and identity remained unknown to the German Gestapo. After the war, she returned to Paris and learned that Henri had been tortured and killed by the Germans in October 1943.  They had discovered his wife was The White Mouse, but Henri refused to share her location.

For five years, Nancy Wake’s courage drew the respect of her fellow guerilla warriors. Of Nancy, the soldiers said, “This woman is the bravest of all.” The White Mouse was one of the Nazi’s most wanted resistance leaders, and one of the most decorated heroines of World War II. She died in August 2011 in London at age 98, and her ashes were scattered in Montlucon in central France.