by peteblack4ua@gmail.com | Apr 6, 2020 | Determination Despite the Odds, Overcoming Obstacles, Perserverance 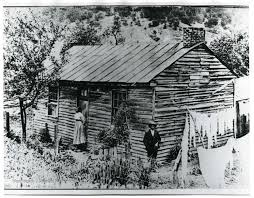 1872 – Hampton Institute, Hampton, Virginia: Booker arrived at the school with 50 cents in his pocket. Exhausted and filthy after walking almost 300 miles, he was unsure whether they would take him as a student. Assistant principal Mary Mackey interviewed him and then asked him to sweep a room.

Booker meticulously swept and dusted the room three times. He passed his ‘sweeping test’ and became a student at one of the nation’s top industrial education schools for freedmen. During the three years of course work, Booker worked as the assistant janitor and was an outstanding student, graduating in the summer of 1875.

Booker was born to Jane, the cook on the James Burroughs plantation in Franklin County, Virginia. He never knew his father and wasn’t sure of the year he was born, probably 1859. The 12 by 16-foot cabin served as both their house and the cook shed for the white family. He slept on rags on the clay floor and got his first pair of new shoes at age 6. Booker’s job was carrying sacks of corn by mule to the mill to be ground into meal.

When the Civil War ended in 1865, Jane and her children were freed. They loaded their few belongings in a small wagon and traveled to Malden, West Virginia, where Jane married another former slave, Washington Ferguson. Booker joined his stepfather working in the salt furnaces nearby.

During trips to and from work, Booker passed a small school for freedmen. He convinced his stepfather to let him attend the school, with the stipulation that Booker would work at the salt furnace from four a.m. until nine a.m. when school started. On the first day of class, Booker realized that most children had two names. He chose Washington for his second name – it was the best name that he knew.

In 1866 Booker became a houseboy for Viola Ruffner, the wife of a coal miner. She recognized his intelligence and integrity and supported his desire to be educated. He worked for the Ruffners for roughly four years until 1872 when he left home and mostly walked almost 300 miles to the Hampton Institute in Hampton, Virginia.

After graduating from the Hampton Institute, Booker returned to his old school in Malden and taught for three years before returning to Hampton to teach night classes. In 1881, the principal at Hampton was contacted by a group of white citizens from Tuskegee, Alabama, who were interested in creating an industrial education school based on the Hampton model.

Although they preferred a white principal, Booker got the job based on Armstrong’s recommendation. He accepted the position site unseen. In June 1881, Booker arrived in the small community of 2,000 to start a school. He soon discovered that the group had only an idea – there was no building or land on which to build a school.

On July 4, 1881, Booker T. Washington started the Tuskegee Normal and Industrial Institute in an old church. About 30 students came on the first day. With the help of a $2,000 grant from the Alabama Legislature, the school purchased an old farmhouse and 100 acres of land. Over the years, Booker used his influence to raise funds to improve the facilities and grow the enrollment.

In the next two decades, Booker T. Washington became one of the most influential African American leaders in America. In 1900, he started the National Negro Business League, and his story became well known through his autobiography Up From Slavery, the following year. He served as an adviser to Presidents Franklin Roosevelt and William Taft.

“Success is to be measured not so much by the position that one has reached in life as by the obstacles which he has overcome while trying to succeed.”   Booker T. Washington