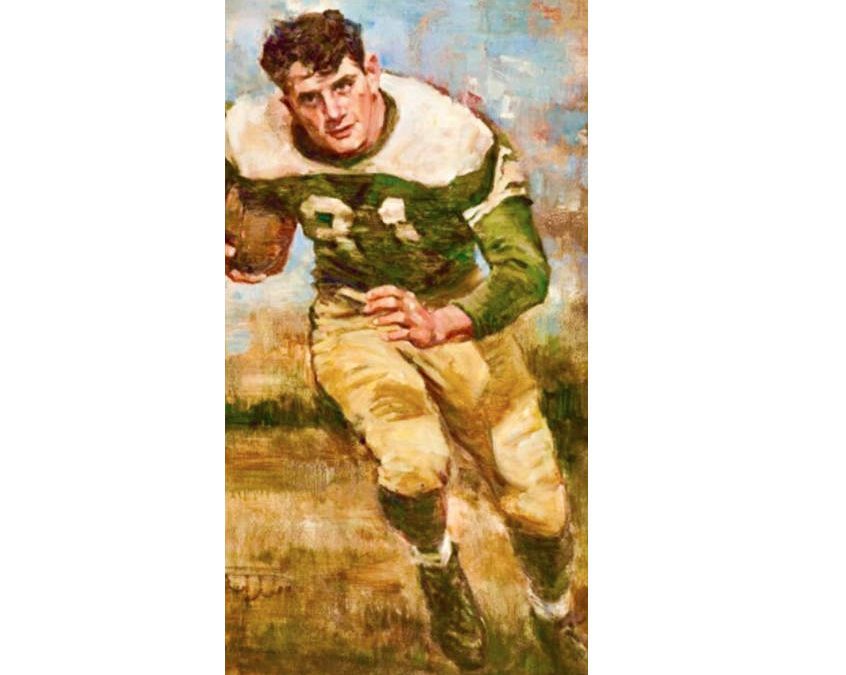 Fall 1954, Texas A&M University – College Station, Texas: They nicknamed him the Sugar Land Express. Ken Hall arrived on campus as the best high school football player in history. The single-wing formation quarterback at Sugar Land High School set 17 national rushing records from 1950-53. In a game against Houston Lutheran High School, Hall ran for seven touchdowns, intercepted a pass and returned a punt, both for touchdowns, and rushed for 520 yards. Sugar Land fans expected that from him.

Hall had been “Mr. Everything” for Sugar Land High. At 6’1” 205 pounds with world-class sprinter speed, he had the unique ability to be running full speed after one step. He led the school to three straight district football championships, three state track titles and two district basketball titles. Some thought Ken Hall could have made the U.S. Olympic team in the decathlon.

In the spring of 1956, Hall had a change of heart and begged Bryant to take him back on the team. Bryant agreed, but Hall continued to be a fish out of water. Bryant believed in defense first and as little offense as was necessary to win. Bryant forced Hall, a stand-up quarterback who never blocked, and rarely was tackled in high school, to play fullback and linebacker. Hall hated both positions. He never started a game for the Aggies. He quit again after the seventh game of his junior year.

In 1957, in what would have been Hall’s senior year at Texas A&M, he signed a $7,000 contract to play for the Edmonton Eskimos in the Canadian Football League. Meanwhile, in College Station, John David Crowe, a halfback, and classmate of Hall’s, won the Heisman Trophy as the best college football player in America.

After a year in Canada, the Baltimore Colts in the National Football League drafted Hall. He also played for Pittsburg, Chicago and Houston before a crushed vertebra in his neck prematurely ended his NFL career. His four-year NFL career proved that Hall had what it took to play at the highest level. In 1983, Hall was inducted into the High School Football Hall of Fame. In 1999, the Kenneth Hall Trophy was established and is given annually to the nation’s top high school football player.

Coach Bryant always regretted that he derailed the Sugar Land Express. Before he died, and 25 years after Ken Hall quit his team at Texas A&M, Bryant wrote to Hall. He shared how sorry he was that things hadn’t worked out at A&M and how glad he was that Hall had a successful business career. Bryant said that he learned a valuable lesson from the mistakes he had made coaching Hall – that there are different ways to motivate people and that not everyone responds to constant pressure and badgering. And Bryant admitted that Hall was a better running back than John David Crowe.

Paul William “Bear” Bryant is arguably the greatest college football coach of all times with 323 wins and six national championships. Though he had some early success at Texas A&M, it was what he learned from his coaching blunders, his willingness to change and continuously improve that ultimately made him into one of the greatest to ever walk a college sideline.

“Kenneth Hall was the biggest coaching mistake I ever made. You’re a fool to think you can treat them all alike. He should have been an All-American. With him, we would have won the 1957 National Championship. Without him, we lost.”      Coach Bear Bryant