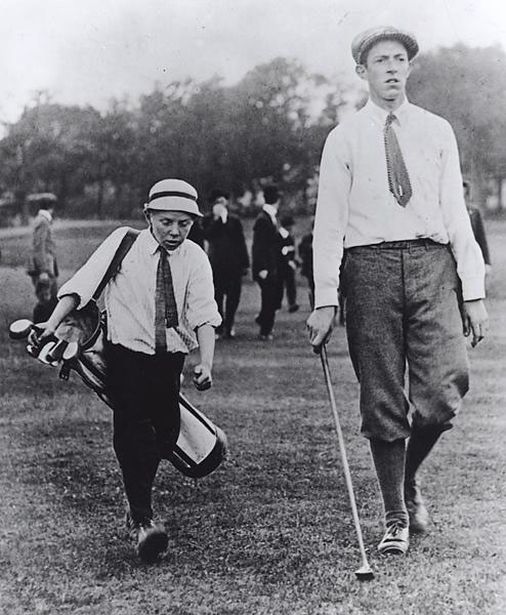 “The young do not know enough to be prudent, and therefore they attempt the impossible – and achieve it generation after generation.”         Pearl S. Buck

September 21, 1913 – U.S. Open Golf Tournament – Brookline, Massachusetts: It was the kind of moment that boys dream about, or dread. To try to put the incredible win into perspective, imagine the World Series happening across the street from your house and you are asked to pitch game seven, and you are the winning pitcher.

Or imagine that the NFL Super Bowl is occurring in your neighborhood, and you quarterback the winning team to victory. Such was the moment for a gangly 20-year-old amateur golfer playing in the 1913 U.S. Open Golf Tournament across the street from his house in Brookline.

For what seemed like forever, Francis Ouimet, with his ten-year-old caddie Eddie Lowery by his side, stood studying his 15-foot birdie putt on Hole No. 17, the hole directly across from his house. He had a two-stroke lead in a sudden-death playoff round against four-time British Open Champion Harry Vardon. Experts and critics alike had fully expected young David to succumb to Goliath long before now.

Several thousand people gathered on hole No. 17, including Francis’ mother, Mary Ellen, who had never seen him play golf, but who had slipped across the street to watch the events unfold on this late afternoon. Now she held her breath along with the crowd and prayed silently. Ouimet confidently stroked the putt – the roar of the hometown crowd was heard for several miles. No amateur golfer had ever won the U.S. Open. The impossible victory stunned the golfing world.

When Francis Ouimet was 4 years old, his parents bought a house in Brookline across the street from the 17th hole at The Country Club Golf Course, the oldest golf course in America. The Ouimets did not have the money to join the country club. Francis and his older brother caddied for golfers to make spending money. The two brothers created a three-hole golf course in their backyard using sunken tomato cans for the cups and taught themselves to play golf with an old club they found.

Francis’ golf skills caught the attention of the course caddie master who allowed him to play the course during less busy periods. Francis’ father suggested that he “give up golf and do something worthwhile with his life.” But by his late teens, Francis had made a name for himself by winning several local tournaments. Encouraged by his win in the Massachusetts State Amateur Championship in the spring of 1913, Francis decided to try to enter the U.S. Open.

After qualifying for the U.S. Open, no easy feat, Francis had to convince his boss to grant him two days off from his job at a sporting goods store.

Despite his youth and inexperience, Francis matched the seasoned veteran Vardon stroke for stroke in the first three rounds of the tournament. Incredibly, after sinking the put on No 17, Francis calmly birdied the final hole of the tournament and beat Vardon by four strokes.

Francis Ouimet’s victory ended Britain’s domination of the golf world, and his improbable victory transformed the interest in golf across the nation. In 1913, there were an estimated 350,000 golfers in the U.S. but, inspired by Ouimet’s impossible win, a decade later the number had grown to two million golfers.

Although unquestionably less revolutionary than the “shots heard round the world” which began the Revolutionary War at Lexington, Massachusetts, 138 years earlier – the shots fired on September 21, 1913, on a golf course 12 miles away revolutionized the game of golf. The young kid whose father discouraged him from playing golf will forever be known as the Father of American Golf.