by peteblack4ua@gmail.com | Mar 11, 2022 | Chasing Your Dream, Determination Despite the Odds, Limitless Possibilities | 1 comment 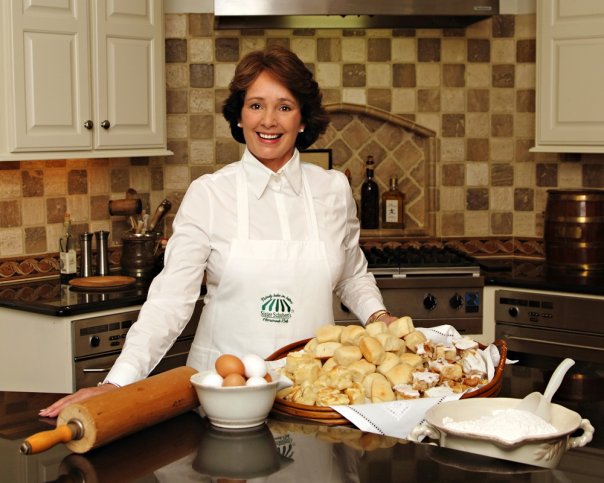 1991 – Troy, Alabama: Patricia “Sister” Schubert, a 40-year-old single mother with two young daughters, was working in her father’s furniture store. She enjoyed working for him, but sometimes worried her salary would not support her family. Word had gotten out about her delicious dinner rolls, so most nights, after long days selling furniture, she and the girls often baked rolls at night in her small kitchen. She needed more space.

“Daddy, can I turn 1,000 square feet of your furniture warehouse into a bakery?” she asked. “Sure, honey,” he answered and then shook his head. “But, Sister, how much money can you make selling a pan of rolls?”

Patricia Schubert grew up in Troy and was nicknamed Sister because her younger sister, Charlotte, struggled to pronounce Patricia. As a small girl she would climb up on an old wooden stool and help her grandmother with the baking. Sister loved making brownies and pies, but her favorite was when they made grandmother’s special yeast rolls. The wonderful aroma filled the house. The recipe had been passed down for five generations.

After high school, Sister worked a couple years as a flight attendant based in Houston, Texas, before earning a degree in interior design from Auburn University. After college, she returned to Troy and went to work for her father.

In 1989, Sister’s church, St. Mark’s Episcopal, had a frozen food fair at Christmas. Sister baked 20 pans of her grandmother’s rolls and sold them all. The following year, she had orders for 200 pans. In year three, orders grew to 300. Her phone began to ring off the hook, and not just at Christmas.

Sister finally got the message that God was nudging her toward a business opportunity. She decided to do what she loved to do, and what she knew she was meant to do…baking. And she promised God that if he helped her, she would help feed the hungry and make the world a better place.

Sister’s father helped her set up a make-shift bakery in the back of his furniture store. She used her old wood-paneled station wagon as $4,000 collateral to buy two commercial ovens and an industrial mixer and hired five employees. In six months, the business needed more space and she asked for another 1,000 square feet. Sister drove her samples to every grocery store within a 50-mile radius of Troy. Her first commercial customers were a curb market in Troy and a Montgomery restaurant.

In 1993, Sister met George Barnes, a Montgomery food broker and the man she would later marry. He helped her land her first grocery store customer, Western Super Market, in Birmingham. It was Christmas Eve, and although she had been baking for three days with little sleep, Sister put 24 cases of rolls in her station wagon and took them to Western because the store was sold out. Bruno’s Grocery in Birmingham soon followed.

Eventually, the little furniture store bakery wasn’t large enough. Because no banks in Troy would loan her the money, Sister went to AmSouth Bank 20 miles away in Luverne. They agreed to lend her $1 million to build a commercial bakery in Luverne with an initial production capacity of 1.5 million rolls a day. Within two years production had increased to six million rolls a day.

In 2000, Sister and George sold their business for $40 million to the T. Marsetti Company in Lancaster, Ohio, who had the capacity to take their business national. Marsetti agreed to keep the Sister Schubert name, made Sister a vice president and gave her the right to approve any recipe changes.

Shortly after selling the company, Sister formed the Barnes Family Foundation to feed the hungry and help children in need, allowing Sister to make good on her promise to God. The foundation has donated millions to charity. Today Sister Schubert produces more than nine million rolls each day in three commercial bakeries in Alabama. Sister Shubert, now 69 years old, is still the brand spokeswoman for the company and enjoys visiting grocery stores and meeting customers across the country.

“To me it was never about selling rolls,” explains Sister. “It was about sharing with the world the wonderful rolls I made with my grandmother.”