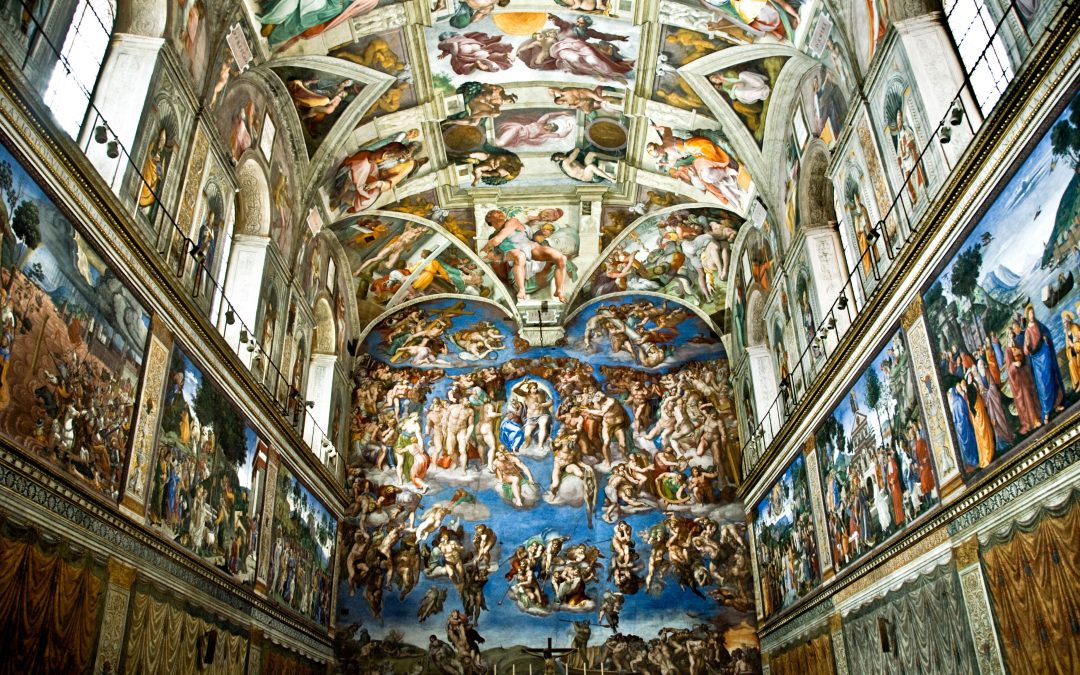 May 10, 1508 – Rome, Italy: When he had first been approached by Pope Julius II to tackle the project, he fled from his home in Caprese, Italy, to hide out in Rome rather than agree to the pope’s request. He was overwhelmed by the magnitude of the task, and he didn’t think he was the right person for the job. After the second request from the pope, he reluctantly agreed to the contract.

He was a sculptor, not a painter, and this wasn’t just any project. The pope wanted him to paint a series of murals in the Sistine Chapel, on the chapel ceiling, no less. The pope was adamant that Michelangelo di Lodovico Buonarroti Simoni – and no one else – was the right man for the job. Michelangelo felt he had no choice but to accept the assignment.

Michelangelo was born March 6, 1475, in Caprese, Italy. His mother died when he was six, and he went to live with the family of a stonecutter who worked in his father’s marble quarry. The young lad was a natural with a chisel and hammer. Michelangelo was not a stonecutter; he was a sculptor, a prodigy with that rarest of abilities to see the angel within the marble. Among his early works was the Pieta, which was commissioned by the Vatican.

Michelangelo was 33 years old in July of 1508 when he began work on the Sistine Chapel ceiling. His only experience as a painter had occurred years before when he was a student. The pope wanted a depiction of biblical scenes from the New Testament, but Michelangelo convinced him to use the Book of Genesis as the subject matter.

The daunting mission was to paint more than 300 life-size figures on the curved ceiling, beginning with the creation of Adam and culminating with Noah and the flood. The ceiling spanned 130-feet long and 43-feet wide, a total of more than 5,600 square feet.

Because the pope was unwilling to suspend mass, Michelangelo’s first challenge was to design a unique scaffold that could hinge off the walls beneath the 65-foot-high ceiling. Through trial and error, he learned the art of buon fresco painting – the technique of painting on a moist, plaster surface with colors ground up in limewater. In the early stages of the project mold grew in the plaster, and the painting had to be removed and redone.

The tedious painting required Michelangelo to stand on a scaffold, painting awkwardly above his head. His arms burned and ached from hours of holding the brush above his head. At other times he painted with his back bent for long periods. His face and eyes provided a human canvas for the paint droppings. Michelangelo’s initial fears became a reality – the task overwhelmed him. He dreaded the days when the impetuous pope climbed up on the scaffold to chastise him about his slow progress.

Michelangelo wondered why he’d agreed to this project. In his journal he wrote, “I am not in the right place – I am not a painter.” But assisted by a team that mixed his paints and plaster and carried it up to the scaffold, Michelangelo painted on day after day. With his vision permanently affected by the strain and splatter, he made the final brush stroke in October of 1512, more than four years after he had begun.

Five hundred years later, Michelangelo’s magnificent painting of nine scenes from the Book of Genesis is the crowning masterpiece of the European Renaissance. His fresco of the creation of Adam is second in popularity only to Leonardo da Vinci’s Mona Lisa. Five million visitors tour the Sistine Chapel each year and stand in awe at Michelangelo’s brilliant creation. Pope Julius II was right – Michelangelo was the right man for the mission.