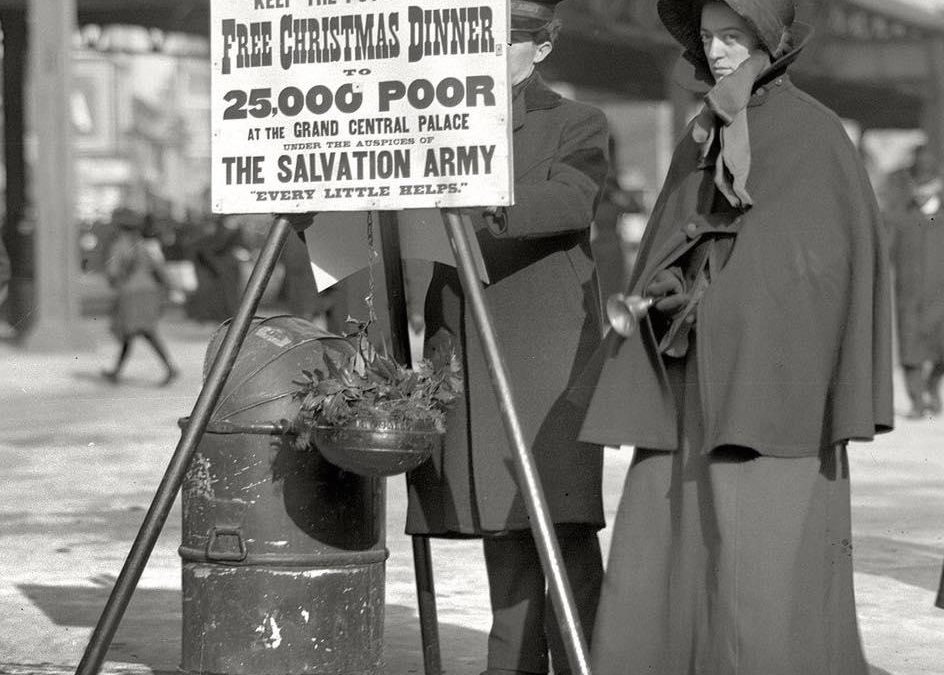 July 2, 1865, East London, England: Without a church to pastor, William Booth set up his tattered tent in a Quaker cemetery on the edge of the slums of East London, home to almost 500,000 people. He preached nightly and they came – homeless, criminals, prostitutes, alcoholics and drug addicts.

Booth grew up in poor neighborhood in the mid-1800s in Nottingham, England. He knew the pain of poverty, what it was like to go hungry and was familiar with the ugly side of life. Because of those childhood experiences, helping the poor would become the driving force in his life.

At 15, Booth was converted in a small Methodist chapel. He wrote in his diary, “God shall have all there is of William Booth.” At 23, he was ordained as a Methodist minister, but he didn’t subscribe to the formal traditions of the church. He believed in a more practical application of the gospel, preferring soup kitchens over fancy sermons. Booth grew increasingly frustrated with the limits placed upon him by the church.

In 1861, at a Wesleyan Methodist conference, Booth was singled out for welcoming “the homeless, the hungry and the destitute” to his church. He was criticized for spending church offerings on social programs to provide food, clothing, and shelter for the poor.

Booth defiantly told conference leadership, “Most churches would like to send their converts to Bible college for five years. I’d like to send them to hell for five minutes. That would do more than anything else to prepare them for a lifetime of passionate ministry to the poor. You cannot warm the hearts of the people with God’s love if they have an empty stomach and cold feet.” Then he stormed out.

In 1865, Booth resigned as pastor of the Reformed Methodist Church in Spaulding, England. He had lasted seven years. Without a church to pastor, he found his calling to the poor under the tattered tent in the squalid slums of East London. In an open area of that cemetery, he founded the East London Christian Mission, which would later become the Salvation Army.

The mission focused on ministering to the poor, down-and-out masses – prostitutes, gamblers, alcoholics, drug addicts and the homeless. Booth’s ideas and practices at the Salvation Army were a lightning rod for criticism. It came from all corners, especially from churches. Because the “salvationists,” as his followers were known, were in God’s Salvation Army, they referred to themselves as soldiers and wore military-like uniforms.

The soldier’s special handshake upon greeting each other brought accusations of being cult members. When the Salvation Army brass bands played loud hymns in the streets to attract the poor to the missions, it further irritated critics. As did their practice of ringing bells and collecting donations in kettles on street corners to raise money for the poor. Sometimes at Salvation Army open-air meetings, salvationists were verbally and physically abused by those opposed to their approach. Some died as martyrs for the cause.

Still, William Booth remained resolute about his mission. “What is the use of preaching the gospel to men whose whole attention is concentrated upon a mad, desperate struggle just to keep themselves alive? They need saving, but they also need food, they need shelter and jobs.”

The work of the Salvation Army spread to New York City, across America, to Canada, Australia, France, Switzerland and South Africa. William Booth led the organization until his death in 1912 at age 83. An estimated 150,000 people filed by his casket in the Clapton Congress Hall in London. More than 40,000 attended his funeral, including Queen Mary.

More than 150 years after its founding, the Salvation Army remains one of the most recognized, admired and misunderstood organizations worldwide. Today 1.25 million soldiers serve the poor in 125 countries. The organization serves more than one million meals a week and their thrift stores and Christmas bell-ringing campaigns raise millions to support homeless shelters and free drugs and alcohol rehab programs.