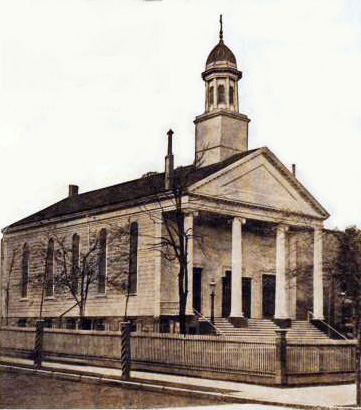 Noon – Wednesday, September 23, 1857 – New York City: Jeremiah Lanphier waited in a small room on the third floor of the consistory building at the rear of the North Dutch Reform Church. The grand old church sat in the heart of the business district, just around the corner from Wall Street. Established in 1769 by early Dutch settlers, church construction pre-dated the Revolutionary War by six years.

Forty-eight-year-old Jeremiah Calvin Lanphier, originally from Coxsackie, New York, had run a small mercantile business in the city for nearly 20 years before putting his business on hold. In an effort to save its dwindling congregation, the church appointed Lanphier to become a missionary to businessmen of New York City. His task had been a bold, unique undertaking. After uttering a simple prayer, “Lord, what would you have me to do?” he felt a leading to start a weekly prayer meeting for businessmen.

Lanphier published handbills to advertise the noon meeting and placed them in local businesses. The day of the event arrived and when no one showed by 12:10 p.m. he began pacing the floor. At 20 minutes past the hour, he had begun to wonder about the merit of his idea. At 12:35 p.m., just as he was thinking of leaving, he heard someone coming up the stairs.

Six businessmen attended Lanphier’s first prayer meeting. Twenty men joined the group the second week and by the third week the number doubled to 40. Encouraged by the response, Lanphier moved the prayer meeting to a daily noon event.

In the summer of 1857, a recession plagued New York City. On August 30, the Ohio Life Insurance Company and its bank failed. A week later the New Haven Railroad failed. By the time Lanphier began his prayer meeting in September, 29 banks had failed in New York City. On October 14 the Bank of New York, the oldest and strongest bank in the city, failed along with 14 other banks, triggering the Financial Crisis of 1857. The Bond Market failed and widespread panic spread from New York City to the rest of America and Europe.

Spurred by the financial crisis, Lanphier’s prayer meeting numbers grew exponentially. Within a few months, the North Dutch Church participants overflowed to the John Street Methodist Church near Broadway. Soon the Metropolitan Theater on Chambers Street was packed at noon each day with up to 2,000 people praying. Six months after the initial prayer meeting an estimated 10,000 people were praying across New York City as many businesses shut down during the noon hour so their employees could attend.

Over the course of a year, the mid-day prayer meetings spread to Boston, Philadelphia, Washington, D.C., and Chicago. In Chicago, a 21-year-old shoe salesman named Dwight L. Moody felt a call to Christian service. He later became one of the greatest evangelists in the history of America.

The period 1857-1859 was considered the greatest awakening of human hearts in American history. An estimated one million lives were changed at noon prayer meetings across the country. Because the U.S. population was only 30 million people, roughly a tenth of today’s population, that number equates to 10 million people today.

The movement started with one man on his knees in the third floor lecture room of the North Dutch Reformed Church on Fulton Street in New York City. A simple prayer, a willing heart, an act of obedience, and a worldwide revival.