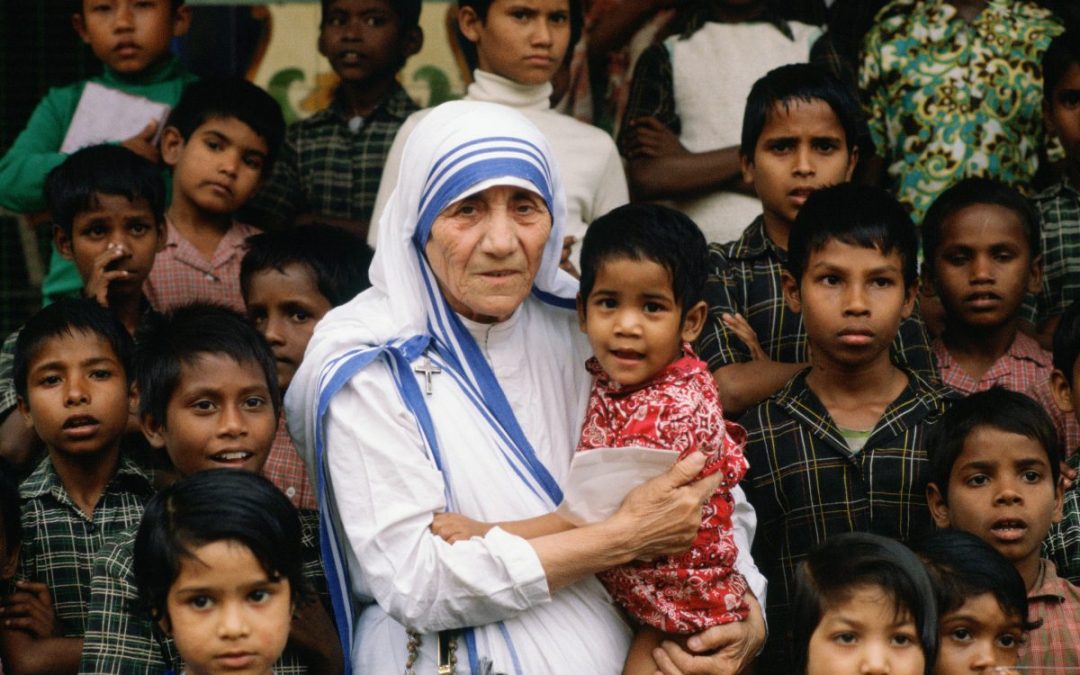 August 1948 – Calcutta, India: After years of looking over the wall at the filth and poverty in the streets beyond, she could no longer ignore what she saw. She resigned as principal of St. Mary’s High School for girls to work with the poor. She knew it wouldn’t be easy, but she had no idea just how difficult and discouraging the work would be.

Agnes Gonxha Bojaxjiu was born in Skopje, Yugoslavia, in 1910. Her father died when she was 7, leaving her mother to raise three children. Much of her early life revolved around the church. At age 18, she joined the Sisters of Loreto convent in Dublin, Ireland and never saw her mother again.

A year later, Bojaxjiu was sent to the Sisters of Loreto mission in Darjeeling, India. In 1931 she took her vows and chose the name Teresa. She wanted to be named after St. Therese of Lisieux – the patron saint of missionaries. Small and shy, Sister Teresa began her career as a history and geography teacher at St. Mary’s. In 1937 she took her final vows becoming Mother Teresa and in 1944 she was promoted to principal of the school.

St. Mary’s, an exclusive school for girls from the wealthier casts, was separated from the worst slum in Calcutta by only the convent wall. Although Mother Teresa loved her teaching career, she was burdened by what she saw in the slums. In 1946, while riding on a train, God confirmed what she had been feeling for a long time – she was to leave the convent, live among the poor and help them.

Mother Teresa’s decision was met with resistance. After unsuccessfully trying to get her to change her mind, the Sisters of Loreto finally released her. Then she had to gain approval from the Archbishop of Calcutta to serve the people as an independent nun. When she asked the Vatican for permission to start a new Catholic order to support her work she was refused. Undeterred, Mother Teresa rented a small hut and struck out on her own without the Church’s support.

The project was more difficult than she imagined. During her moments of doubt and loneliness, she considered returning to St. Mary’s. With little support, she begged for money, food and supplies. Her confidence that she was called by God to do this work was all that kept her going during the tough times.

It took Mother Teresa two years, but in October 1950, she gained Pope Pius XII’s approval to start the Missionaries of Charity Order to support her work among the despised Dalit people. The lowest of the low in one of the world’s poorest countries, Dalits were not recognized in the Hindu caste system. Their plight in society was to clean toilets, sewers and remove dead animals from the streets. Because of church support, money and resources began to arrive and local volunteers, inspired by Mother Teresa’s love and tenacity, joined the cause.

For almost 50 years, Mother Teresa faithfully served in the Calcutta slums. In 1979, when she won the Nobel Prize for her humanitarian efforts, she skipped the ceremonial banquet and then donated the $200,000 award to the mission. In 1997, at the time of her death, the Missionaries of Charity Order had more than one million volunteers serving the poorest of the poor in 610 missions through-out North and Central America, Asia and Africa.

Gallup’s 1999 Survey determined Mother Teresa was the Most Admired Person of the 20th century. Rather than choosing someone rich, famous or powerful, a five-foot nun captured the hearts and minds of the world while living out her calling to help the poor. In 2016, the Roman Catholic Church canonized Mother Teresa as Saint Teresa.