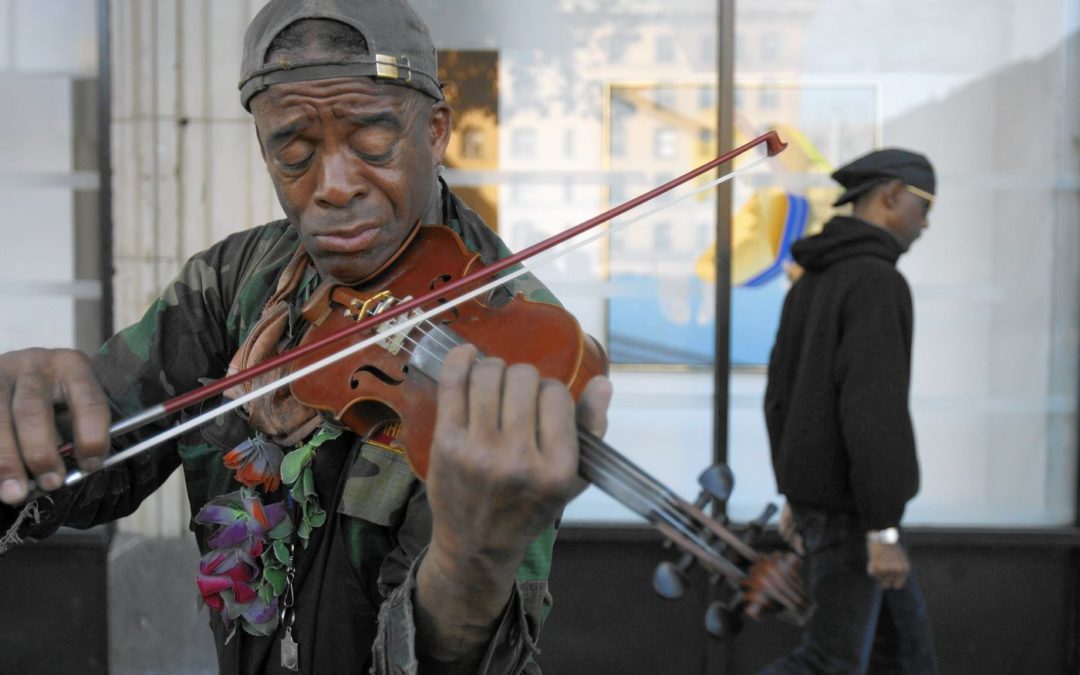 Early 2005, Pershing Park – Los Angeles, California: Steve Lopez, a reporter for the Los Angeles Times was rushing back to the office to meet a deadline when he came upon a strange site. On a busy street corner across from a statue of Beethoven, a middle-aged black man in a ratty sweater and dirty sweatpants was playing classical music on an old violin with two strings missing. A few feet away sat a shopping cart containing the man’s clothes and bedding.

Always in search of a story, Lopez stopped. He learned that the fellow, age 54, was from Cleveland, Ohio, and he had lived on the streets of LA for five years. The man told Lopez that he had once been a musical prodigy at the prestigious Juilliard School in New York City. Not believing the story, Lopez decided to check it out.

Nathaniel Anthony Ayers was born in Cleveland in January 1951. In the 7th grade, a band director introduced him to classical music. Although he learned to play the trumpet, tuba, and piano, it was the stringed instruments – violin, bass violin, and cello that he loved. In 1969 Ayers earned a full music scholarship to Ohio University. A year later, he received a full scholarship to Juilliard, a dream come true to play with the best. He was a classmate of world-renowned cellist Yo-Yo Ma.

Ayers had world-class potential but was a misfit at Juilliard. He played a $100 violin his mother saved up to buy. His clothes and the color of his skin were different than most students there. In the fall of his junior year, he began to have bouts of anxiety and hallucinations. He yelled at classmates and drew on the walls of his dorm room. When the police caught him running naked in the street, they took him to Bellevue Hospital where he was diagnosed as a paranoid schizophrenic.

Ayers dropped out of school and moved back home with his mother where he was in and out of treatment. Medications did not seem to help. Electric shock therapy made matters worse. In East Cleveland, he was Tony – the strange guy who wandered Mayfield and Lee Roads with his cello case – occasionally giving roadside concerts. When his mother died in 2000, Ayers left for LA to look for his father who had left home years before.

Lopez, intrigued with Ayers bizarre story, wanted to help him. He made regular visits to his concerts and occasionally spent the night with Ayers on the street where he slept with a bat to chase away the rats. When Lopez told the story in the Los Angeles Times, two violins, a cello, and bass were donated to Ayers. Dozens of people offered to help.

It took Lopez a year to get Ayers to spend the first night at LAMP – a shelter for homeless mentally ill people – located in Skid Row, the worst section of the inner city. It took three more months before he spent his second night there.

Today at age 66, Nathaniel Anthony Ayers no longer lives on the street but in the South Bay mental facility in Los Angeles. He frequently entertains residents with concerts on one of his two violins, six cellos, or bass. Steve Lopez visits weekly, brings Ayers to his house on holidays, and often takes him to Los Angeles Philharmonic Symphony concerts.

For Ayers music is therapy, it quiets the voices in his head. And it gives hope to a man who once played with Yo-Yo Man at Juilliard and did not give up on his dream to be a musician even when living on the streets of LA.

“There is no medicine like hope, no incentive so great, and no tonic so powerful as the expectation of something tomorrow.”                    Orison Swett Marden