by peteblack4ua@gmail.com | Apr 29, 2019 | Determination Despite the Odds, Overcoming Obstacles | 5 comments 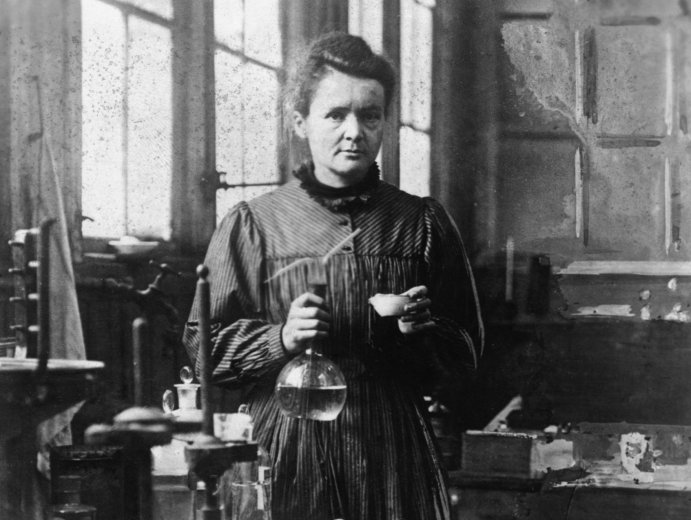 1885 – Warsaw, Poland. “Papa, it’s not fair,” cried Marie. “I am smarter than all the boys in my class.” Her father assured Marie that he would teach her. Marie was brilliant. Like her father, she loved math and physics. She had graduated from high school at 15. There was no need to apply to the men-only University of Warsaw; women were not accepted. Marie took a job as a governess, and her father tutored her in math, physics, and chemistry in the evenings.

Marie Sklodowska was born in Warsaw in 1867. Her mother was a headmistress at a private school, and her father was a math and physics teacher. When Marie was 11, her mother died from tuberculosis leaving her father to raise four children.

Marie’s job helped raise money for her older sister Bronya to attend the University of Paris, one of a few universities in Europe that accepted females. In 1891 at age 24, after her sister graduated, Marie enrolled in the school of sciences at the university. She was one of two women in the program.

Driven, and with a point to prove, Marie earned a masters degree in physics in 1893, graduating at the top of her class, to the dismay of her male classmates. She earned a degree in mathematics a year later. In 1894 Marie met Pierre Curie, a professor at the university with whom she shared a small physics lab. The graduate student and the professor were married the following year.

Impressed by Marie’s research, Pierre set aside his work and joined her research into certain elements, like uranium, which radiated energy. The Curie’s research work led to the creation of the field of atomic physics. Marie coined the term radioactivity to describe the phenomenon.

In 1898 Marie discovered a new radioactive element, which she named Polonium after her native country. Four years later she discovered a second element, which she called radium. In 1893 the Curies were awarded the Nobel Prize for their work in physics, making Marie the first woman to win a Nobel Prize. A decade later she received her Ph.D. in Physics – the first woman to earn a doctorate in physics from the University of Paris.

In 1906 Pierre stepped in front of a horse-drawn carriage and was killed. Devastated, Marie decided to leave her research career and move back to Warsaw with her two young daughters. But when the university offered her Pierre’s physics professorship, she changed her mind. Marie became the first woman on the university faculty.

Marie served on the faculty at the University of Paris for almost 30 years. She trained her daughter Irene to be her assistant and Irene won a Nobel Prize in Chemistry in 1935. Maries’ research work not only pioneered the field of radiation, but it paved the way for women in scientific circles around the world. A total of 45 women have been awarded the Nobel Prize, but Marie Curie is the only woman to win it twice.

Due to years of repeated exposure to radiation, Marie died of leukemia on July 4, 1934. The world’s most famous female scientist is buried next to Pierre at the Pantheon in Paris, the final resting place for France’s greatest minds. She is the first and only woman to be laid to rest there.

“Life is not easy for any of us. But what of that? We must have perseverance and, above all, confidence in ourselves. We must believe that we are gifted for something and that this thing, at whatever cost, must be obtained.”              Marie Curie