by peteblack4ua@gmail.com | Jun 18, 2019 | Against the Odds, Hanging on to Hope, Limitless Possibilities | 4 comments 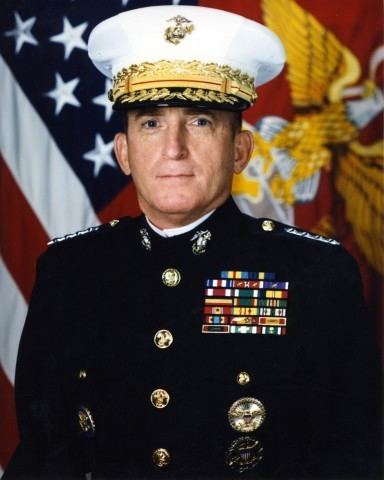 Sunday, February 24, 1991 – Saudi Arabia – Al Khanjar Military Base: As he did every morning, U.S. Marine General Charles Krulak knelt in the chapel to pray. He prayed for a miracle. In one of the driest deserts on earth, Krulak needed a well that would produce 100,000 gallons of water a day to support the 25,000 marines of the 2nd Division. So far the engineers’ drills had produced only dry holes. Operation Desert Storm was set to commence. Time was running out.

Charles Krulak was born in Quantico, Virginia in 1942. Like his father General Victor Krulak, a World War II hero, Charles chose a military career. After graduating from the U.S. Naval Academy in 1964, he was commissioned as a Marine Corps officer and ascended steadily through the Corps ranks while serving two tours of duty in Vietnam.

In August 1990, Iraqi dictator Saddam Hussein invaded Kuwait to take over the country’s oil production. He also planned to invade Saudi Arabia, which would give him control of 20% of the world’s oil supply. In response to these actions, President George H. Bush sent 500,000 troops to Saudi Arabia. In an offensive dubbed Operation Desert Storm, Krulak was deployed as a General with the 2nd Marine Division.

In February 1991, two weeks before Desert Storm was to begin, General Norman Schwarzkopf, Commander of Gulf War Operations, changed his strategy. He decided to outflank the Iraqi Army. It was a daring and brilliant move, but it required General Krulak’s division to move 140 kilometers to Al Khanjar near the Kuwait border where Krulak was ordered to build a temporary base in just two weeks time.

The base at Al Khanjar covered 11,000-acres, with 800 acres of ammunition storage, and five million gallons of fuel storage. The critical essential the base lacked was water. The drills operated day and night, but no water was found. Krulak brought in both Saudi Arabian and Kuwaiti government reps to his command post to see if they knew of water in the area. The answer was no. So he sent word to Bedouin tribes nearby, only to be told there had never been water in the area.

On that Sunday morning in late February while Krulak was in the chapel praying, a colonel interrupted him. “General, there is something I need to show you.” Krulak questioned, “What is it?” The colonel replied, “Sir, you’ve got to see this.” They drove down the base perimeter road, a road that Krulak had traveled many times. The colonel stopped the jeep, then nodded, “General, look over there.” About 30 yards off the road, Krulak saw a white pipe sticking up out of the sand with a cross at the top.

As Krulak walked to the base of the pipe, he discovered a large red pump driven by a diesel engine. Incredulous, Krulak pushed the start button, and water flowed from the pipe. He radioed for an engineer to come test the flow. “Sir, you’re not going to believe this,” the engineer smiled, “the well is putting out 100,000 gallons per day.” Word spread quickly through the ranks about the general’s miracle well.

In 2011, Charles Krulak became president of Birmingham-Southern College during a difficult financial period for the college. He took no salary, and he and his wife lived in the dorm with the students. Krulak’s leadership turned the college around before his retirement in 2015. Today the Krulak’s live in Birmingham, and General Krulak is often asked to tell the story of the miracle in the desert.

“When life is heavy and hard to take, go off by yourself. Enter into the silence. Bow in prayer. Don’t ask questions. Wait for hope to appear.”      Lamentations 3 Message Bible