by peteblack4ua@gmail.com | Apr 27, 2020 | Against the Odds, Chasing Your Dream, Determination Despite the Odds, Long Shots 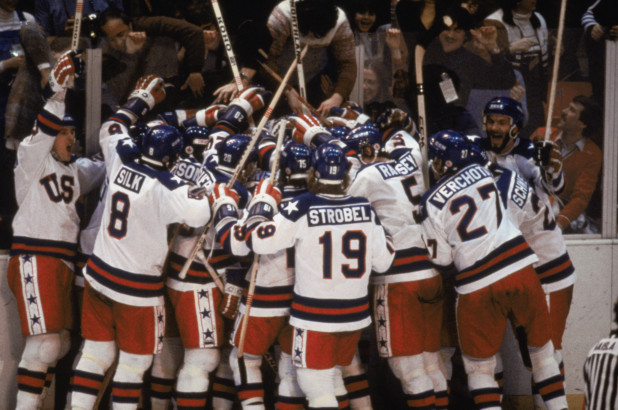 Saturday, February 9, 1980 – Madison Square Garden, New York City: The Russian Olympic hockey team crushed the USA Olympic team 10-3 in the final exhibition before the Olympics. The young American squad was embarrassed. Humiliated. It was a blow out that could have been worse. It wasn’t a surprise. The week before, the Russian team shut out the best hockey players in North America, the U.S. National Hockey League all-star team, 6-0.

The Russians had dominated Olympic hockey, winning every gold medal since 1960. They had not lost an Olympic game in a dozen years, and only one in two decades. They were the heavy favorites to win the gold at the Winter Olympics, which would begin at Lake Placid, New York, in four days. The U.S. team was not expected to medal.

Herb Brooks, fresh off an NCAA hockey national championship at the University of Minnesota, was picked to coach the U.S. team. He was obsessed with beating the Russians. Only avid hockey fans remembered that Brooks was the final player cut from the 1960 U.S. Olympic team – the last team to beat the Russians and win the gold medal.

On July 15, 1979, U.S. President Jimmy Carter gave his “crisis of confidence” speech. He told America it had lost its sense of greatness. Americans were disillusioned. Inflation was more than 11 percent, the Middle East oil crisis created long lines at gas pumps and Iran’s Ayatolla Khomeini kept 50 Americans hostage for 100 days. Russia had invaded Afghanistan; they were a nuclear threat and America’s biggest nemesis.

Two weeks after the President’s speech, almost 70 college hockey players gathered at Colorado Springs, Colorado, dreaming of making the U.S. team. Herb Brooks had studied European hockey tactics – a finesse game of fast skating, rather than the push, shove and fight style in America – hoping someday to get another chance. His time had come.

A master motivator and strict disciplinarian, Brooks put the players through a brutal two- week camp, which included a 300-question psychological profile. His mission to find the best 20 players. And just as importantly, he needed to know how each player would perform under stress and pressure. After selecting his players and a month of practices, the team played a 61-game exhibition schedule leading up to the Olympics.

The USA team began the Olympics on February 12 with a 2-2 tie with Sweden – a huge confidence booster. Then they beat Czechoslovakia 7-3, followed by wins over Norway, Romania, and West Germany, before facing the formidable Russians.

Before the game Brooks told the team, “Gentleman, great moments are born from great opportunities. If we played them 10 times, they might beat us nine times. But not tonight. This is your night. This is your time. Now go out there and take it!”

Trailing 2-1 late in the first period, the USA scored a goal to tie it as the period ended. Their confidence grew. The teams swapped goals in the second period ending in a 3-3 tie. Brooks urged his team, “We just have to beat them for one period – 20 minutes. We can do that!” Forward Mike Eruzione scored the game’s final goal with 10 minutes left, and the fuzzy-faced kids from small towns across America played like their skates were on fire.

ABC Sports Analyst Al Michaels made the call. “Eleven seconds, you’ve got ten seconds, five seconds left in the game. Do. You. Believe. In. Miracles.” A nation needing a victory got one. WE BEAT THE RUSSIANS. Two days later, the U.S. team beat Finland 4-2 to claim the gold.

Of the USA gold medal, Sports Illustrated said, “It may be the single most indelible moment in all of U.S. sports history.” Forty years later, what happened at Lake Placid on that Friday night in February 1980 still reminds us that it’s not the size of the dog in the fight that’s important, but the size of the fight in the dog.

“The fact of being an underdog changes people in ways that we often fail to appreciate. It opens doors and creates opportunities and enlightens and permits things that might otherwise have seemed unthinkable.”                 Malcolm Gladwell