by peteblack4ua@gmail.com | Sep 9, 2022 | Against the Odds, Rising Above Circumstances, Underdogs | 1 comment 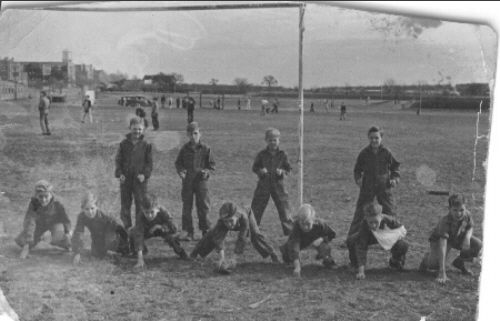 “The fact of being an underdog changes people in way that we often fail to appreciate. It opens doors and creates opportunities and enlightens and permits things that might otherwise have seemed unthinkable.”                           Malcolm Gladwell

1926 – Masonic Home and School, Ft. Worth, Texas: The Masonic Home Orphanage, which sat on 200 acres just east of Ft. Worth, was started in 1900 for the purpose of housing and educating the orphans of Free Masons.  The facility, a lonely depressing place, was home for 150 children, including five-year-old Hardy Brown and his two siblings who were sent to live at the home after witnessing their father gunned down by a rival bootlegger.

The Ft. Worth Masonic Home never had a football team until they hired Rusty Russell in the summer of 1927 as the school’s first coach. The young coach wasn’t sure why he took the job. He was having great success as the coach of the Temple High School Wildcats having taken them to the state semi-finals the previous year. Fellow coaches deemed Russell crazy to leave a well-established Texas program and his very pregnant wife agreed. No one believed the tiny orphanage could ever compete in high school football, but Russell ignored his head and followed his heart.

In 1927, the Masonic Home Masons played in the B division, the smallest division in Texas. Russell hauled his team to away games in a smoke-belching flatbed truck. Though the twelve players in donated, mismatched uniforms and hand-me-down helmets didn’t look like much, they shocked the Texas football world by going 8-2 in their first season. After watching the team play a sports writer dubbed the speedy, undersized boys the “Mighty Mites” and so they were.

Russell’s offense, an early version of the spread offense, utilized the speed and quickness of players often out-weighed by 50 pounds per man. From 1927 to 1931, the orphans compiled a 37-11 record. Texas had never seen this style of gritty, relentless football. Bound by death and hardship, the boys were determined to prove to the world that they were somebody.

In 1932, the Mighty Mites moved up to Class 7A, the largest football division in Texas. With 12 players – all that could fit on the old truck – they competed against schools with several thousand students who dressed out a 100 players. They routinely beat the big, rich schools in Dallas, Houston, and Amarillo who learned to fear the hard-hitting Mighty Mites who had nothing to lose and everything to prove.

The Mighty Mites reached the state semi-finals in 1934, 1938, and in 1940. With All State Linebacker Hardy Brown they played 3-time state champion Amarillo High in the 1940 state championship game. After being stopped on the one-yard-line as time ran out, the Mighty Mites lost a heart breaker 14-7 to the Golden Sandies. The twelve orphans walked off the field as 12,000 fans stood to their feet chanting “Mighty Mites! Mighty Mites!”

Although the Mighty Mites never won a championship, they captured the hearts of millions of people in Texas and across America. In 1940, the city of Ft. Worth built a 15,000-seat stadium to accommodate the Mighty Might crowds. The stadium became known as the house the orphans built.

Rusty Russell coached 15 years at the Masonic Home, compiling a 127-30-12 record. He was later the head coach at Southern Methodist University and in 1971 was inducted into the Texas High School Football Hall of Fame.

After graduating from the Masonic School in 1940, Hardy Brown signed a scholarship with the University of Tulsa where he was All Missouri Valley Conference linebacker for three years. The 6-foot, 190-pound Brown played for 10 seasons in the National Football League with the Baltimore Colts, San Francisco 49ers, and Washington Redskins. Hardy Brown ranks No. 5 on the Top 10 Hardest Hitters in NFL history list.

Almost 100 years later, people still talk about the underdog kids from a tiny orphanage in Texas who traveled to games on an old flatbed truck. Rusty Russell gave the orphans two things they desperately needed: hope, and an opportunity to be something other than orphans. They were winners!