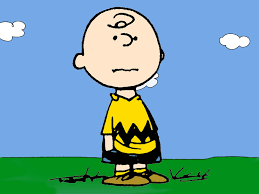 On the day he was born in Minneapolis, Minnesota, his uncle nicknamed him Sparky after a horse named “Spark Plug” in the Barney Google comic strip. The nickname stayed with him and confirmed his destiny. Throughout his childhood, Sparky and his daddy shared a special Sunday morning ritual of reading the St. Paul Pioneer Press newspaper comic strips together. By age eight, he was drawing his own cartoons.

Sparky was the last kid chosen on the ball field. He struggled in school, failing the 8thgrade and several courses in high school. He was awkward socially and often ostracized by his classmates. A lonely child, he withdrew to his cartoons. As a high school senior, with the encouragement of his mother, Sparky completed a correspondence cartoon course at the Federal School of Applied Cartooning in Minneapolis. On the heels of his success, he submitted several cartoons to the student yearbook staff but was turned down.

After high school, Sparky put his cartoonist dreams on hold and joined the Army where he served in a machine gun squad during WWII. In 1945 following the war, he returned home determined to be a professional cartoonist. Sparky sent cartoons to Colliers Magazine and the Saturday Evening Post, but he never got a response. When he applied for a job at Walt Disney Studios, the reject letter stated, “You are not qualified to work as a cartoonist.”

By 1947, Sparky was barely supporting himself as an instructor at the Minneapolis art school where he had completed the cartoon correspondence course. After several rejections, he was finally able to start selling his cartoon Sparky’s Lil Folks to the local Star Tribune newspaper. While doing so he got an idea for new comic strip. He would tell his life story, as a little boy loser and chronic underachiever, in a comic strip.

On October 2, 1950, 27-year-old Sparky’s dream to be a cartoonist became a reality when his comic strip, Peanuts, appeared in seven newspapers. Sparky, who was Charles Schulz, told his story through the exploits of his lovable loser, Charlie Brown. Readers readily identified with the little cartoon character whose kite would never fly and who never succeeded in kicking a football, but who never stopped trying. Charlie and his friends Lucy, Linus, Schroder, and faithful dog Snoopy reminded readers of their own painful and embarrassing moments – their humanity.

By 1958, more than 400 newspapers nationwide were running Peanuts. Schultz’s short 4-panel comic strip led to a revolution in comic strip layouts. Over the next four decades, the comic strip inspired books, Christmas movie specials, apparel, and Met Life Insurance commercials generating one billion a year in sales by the 1990’s and making Schultz a wealthy man.

Schultz identified with his characters and would not let anyone touch his comic strip. Shunning computers, he drew the cartoon by hand, seven comic strips a week, for 50 years.

On Sunday, February 13, 2000, Peanuts fans across the nation opened their newspapers expecting to read the latest Charlie Brown, Lucy and Snoopy adventure. Only, that Sunday morning would be different. There was no Peanuts cartoon. A few hours before the papers hit the doorsteps, 77-year-old Charles Schultz died quietly in his sleep from colon cancer.

At the time of Schulz’ death, his comic strip ran in 2,600 newspapers, and his cartoon collection books were printed in 25 languages. During his long career he had received the highest honors from fellow cartoonists, received an Emmy Award for his animated television specials, and even had a NASA spacecraft named after his cartoon characters.

“Life is like an ice cream cone, you have to lick it one day at a time.”  Charlie Brown