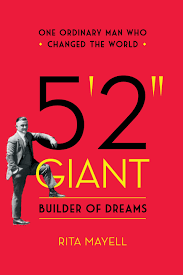 1937 – Los Angeles, California: After his business went bankrupt and two marriages failed, Lionel Mayell swallowed his pride and moved back home with his mother. When he was a boy, she had often referred to him as “the little runt.” Disappointed in his looks and tiny size, she told him that he was a mistake and would never amount to anything. Her words had stung. Now at age 40, Lionel wondered if she had been right all along.

Despite his mother’s prediction, Lionel had been successful. In 1922, at age 25 he dropped out of Stanford Law School in his final semester and started a construction business. He built the first condos in America overlooking the ocean in Long Beach, California. In the era of only rental apartments, Lionel’s idea was wildly successful. He built two more projects, becoming a millionaire before the Great Depression hit in 1929.

A friend influenced Lionel to invest his money in a traveling vaudeville show, which toured the country during the Depression. It cost $25,000 a night to produce the show, and because patrons had little money, they often broke down the barricades to see the show without paying. Within a year Lionel had lost his fortune and his second wife.

After moving in with his mother, Lionel got a job at Douglas Aircraft making 55 cents an hour building military airplanes. It was there he met Dorothy Anderson. They were married in November 1943. Two months later, Lionel and Dorothy’s lives were radically saved at Open Door Church in Los Angeles.

Lionel dreamed of restarting his condo business. Only this time, he would dedicate his business to God. In 1946 Lionel quit his job at Douglas and convinced Bank of America to loan him $1,000 to restart his condo business. He and Dorothy agreed to create two accounts – they put $500 into God’s account and $500 into Mayell Enterprises. Lionel would not squander the money this time.

A short time later, Lionel felt impressed to write a check for $500 from God’s account to Youth for Christ in the Orient even though he had never heard of the organization. Bob Pierce, the pastor at Open Door, had never told anyone about his dream to start a ministry for youth in Asia. That same day, a man in Florida was also impressed to write a check for $5,000. Pierce finally had the confirmation he sought. Youth for Christ, now World Vision, has touched more than 200 million children across the world.

Lionel Mayell, The Father of the Condominium, built large condominium projects from California to Texas to Florida, most of which are still on the Historic Register today. In 1969, Lionel sold his business and joined the staff of Campus Crusade for Christ, faithfully serving until his death in 1978 at age 81.

Perhaps no one had a more significant impact on the spread of the gospel in the world in the 20th Century than 5’2” Lionel Mayell, a generous giant of the Christian faith.

“Remember this: It is possible to give away and become richer!  It is also possible to hold on too tightly and lose everything.”         Proverbs 11