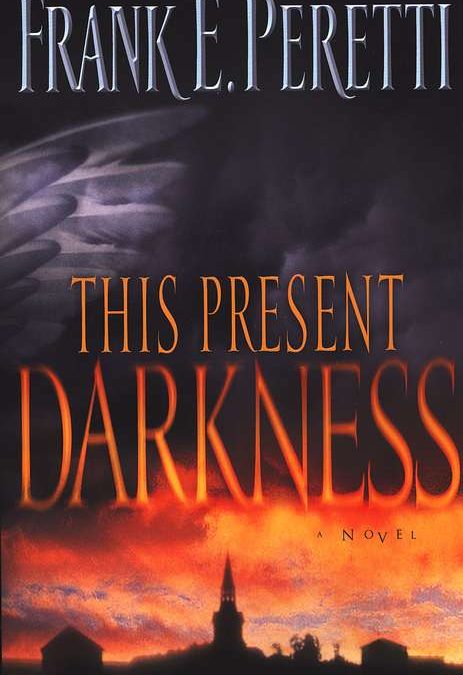 1951 – Seattle, Washington: Frank Peretti was born with cystic hygroma, which caused his tongue to be a black, tumorous growth protruding from his mouth. Doctors at Seattle’s Children’s Orthopedic Hospital trimmed his tongue for the first time when he was three months old. It was the first surgery of many. Frank learned to talk with an impediment because his tongue stuck out of his mouth.

Elementary school was a place of torture for young Frank. He was bullied, both verbally and physically, and the butt of numerous little monster jokes. After school, Frank retreated to his bedroom. Feeling like an ugly little monster, he escaped from reality by drawing cartoons of monsters and writing stories about Frankenstein, Dracula and the Mummy on his mother’s old typewriter. It was in his bedroom that he first dreamed of being a writer.

By age 12, Frank’s tongue no longer needed trimming, and over time he learned to talk without a lisp. After high school, Frank played banjo in a bluegrass band and later toured with a Christian musical group. At age 25, he enrolled at UCLA and studied English and screenwriting. After two years, Frank became concerned that what he was learning was inconsistent with his Christian principles and dropped out of college.

By this time, Frank’s father had quit his assembly line job at Boeing to pastor a small Assembly of God Church on Vashon Island near Seattle. With no definitive plans for his life, Frank began working as the youth pastor at the church. He also worked part-time construction jobs to help pay the bills.

While working as a carpenter, Frank got the idea to write a Christian supernatural novel. The book became his passion and the most challenging thing he had ever done. He started and stopped the project multiple times. Of that period, Frank says, “It was a time of depression, poverty and struggle, but I had to get the book written. I would cry out to God, ‘Am I on the right track?’ And I just kind of felt him saying, ‘Write the book. Just write the book.” In 1983, after five years of writing at night and on weekends, Frank finally completed his 700-page manuscript.

Frank mailed the manuscript to about two dozen publishers but was rejected by all of them. He gave up on the project and stuck the manuscript in a desk drawer. Disillusioned, he also quit his position as youth pastor and found a job in a factory making snow skis.

The idea of publishing the book would not leave Frank alone. In 1986, Crossway Books finally agreed to publish This Present Darkness. Peretti sold a few copies to family and friends, but the book mostly gathered dust in bookstores. He shelved his dream to be a writer and continued building skis.

However, in 1988 a national interest in the Christian supernatural swept across America. While working at the factory in Seattle, Frank was surprised that a local bookstore had sold 4,000 copies of his book in a month. The following month sales hit 20,000. Word of mouth about Frank’s book resulted in a tidal wave of sales across the country.

Today, Frank and Barbara Peretti live in Coeur D’Alene, Idaho. Frank has written 40 books with combined sales of more than 15 million copies. His book No More Bullying deals with his childhood pain. In Frank’s office hangs a snow ski signed by all the factory employees. It serves to remind him of the years of struggle and of God’s faithfulness in the calling on his life.