by peteblack4ua@gmail.com | Aug 3, 2018 | Determination Despite the Odds, Hanging on to Hope, Long Shots, Uncategorized | 1 comment 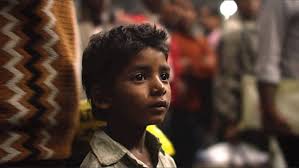 1986 – Burhanpur Railroad Station, Ganesh Talai, India: Saroo was terrified. The afternoon had begun with excitement as the five-year-old tagged along to the train station with his 14-year-old brother, Guddu, to find food and beg for money. Guddu left Saroo on a bench and promised to be back soon, but hours later he had not returned.

Saroo sat crying in the dark. He missed his mother, but he had no idea how to get back to her and their tiny one-room house miles away. Unbeknownst to Saroo, Guddu had been hit and killed by a train.

Walking around the station looking for Guddu, Saroo wandered on to a train just as it departed the station. Exhausted, he fell sleep and when he woke the train had stopped at the massive Howrah Railroad Station in Calcutta. Saroo had no way of knowing he had traveled almost a 1,000 miles across India. He asked strangers for help screaming “Ginestlay?” (Ganesh Talai) hoping someone would help him find his town and his mother, but the busy crowds, who did not speak his language, ignored him.

After several terrifying weeks on the streets of Calcutta, a teenage boy took Saroo to the police station. Saroo didn’t know his last name. He told the police that he lived in Ginestlay and got on a train at Burampour Station. Their search to find his town and family was short and unsuccessful and Saroo was placed in the Nava Jeevan Orphanage.

Saroo’s mother, Kamla, searched for him for months. She rode trains across India to Bombay, Calcutta, and Bhopal looking for him. Although she gave up her search, she always believed that Saroo would come back one day.

September 25, 1987 – Melbourne, Australia: Saroo’s flight from India landed in Melbourne, where he met his adoptive parents, Sue and John Brierley. They flew with him to their town of Hobart, Australia. Saroo spoke no English, and the Brierley’s spoke no Hindi, but they welcomed him into their home and loved him unconditionally.

In India Saroo’s family of five had shared a 100-square-foot house and slept on the floor. In Australia, he grew up in a lifestyle he could not have imagined. He attended school and was a good student. He enjoyed soccer, ran track, and played in a rock band. After high school, he earned a degree in hotel management before going to work in his father’s industrial sales company.

Saroo never lost hope of finding his birth mother, but he had no idea how to begin his search. That changed in 2007 when he discovered Google Earth, a satellite-imaging program on his computer. Finding his mother became an obsession. He worked for his father in the daytime and spent nights and weekends on his laptop looking for his mother. Using satellite pictures made 85 miles above India, a country of 1.3 million square miles, his needle-in-a-haystack mission was to find some landmark remembered from when he was five.

Beginning in Calcutta, Saroo searched rail lines across India. There was no Burampour Station in Ginestlay. He had no idea how long he had ridden the train or how far he had traveled. Month after month he searched, at times giving up in frustration, only to return to his laptop. Finally, on March 31, 2012, at 1:00 a.m., after five years of using Google Earth, Saroo saw it – the water tower in Ganesh Talai. He realized that all those years he had been mispronouncing Ginestlay. Then he found his house. He could not breathe.

May 11, 2012 – Ganesh Talai: Five years after starting his search, and 25 years after getting lost, Saroo found his way back home and was reunited with his mother. No words came to her, but her tears came freely. For years she had dreamed about Saroo’s return as a man.

After talking to his mother, Saroo discovered his name was actually Sheru, Hindi for lion. The 30-year-old lion had come home at last. Saroo continues to live in Hobart, and twice a year he visits his birth mother. He bought her a new house around the corner from where he grew up.

“Every great story happened when someone decided not to give up.”  Spryte Loriano