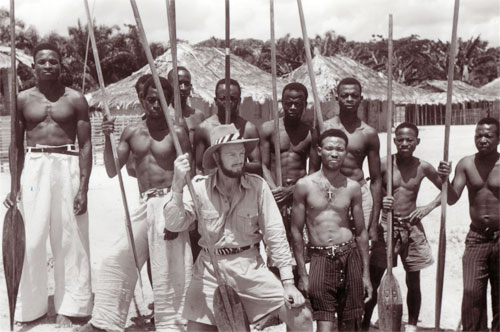 1940 – Los Angeles, California: John Goddard overheard his grandmother sigh, “If only I had done those things when I was John’s age.” It was something John had heard her say before. Even at age 15, John knew he did not want to make the same mistake. On a rainy Saturday morning, John took a yellow notepad, and with his father’s help and encouragement, created his life list – 127 things he wanted to do before he died. Most of all, John wanted to be an explorer.

While in high school John checked off Eagle Scout, typing 50 words per minute, playing the piano and violin, and running a five-minute mile from his list. After graduation he earned degrees in anthropology and psychology from the University of Southern California. After serving four years as a fighter pilot in the U.S. Air Force during World War II, he went on a two-year mission trip with The Church of Jesus Christ of Latter Day Saints. Then he got serious about his life list.

In 1951, John completed item No. 1 on his list. He became the first person in history to navigate the entire 4,132 miles of the Nile River in a canoe. The trip took 9 months. In 1956, he completed No. 3, a similar 2,920-mile trek down Africa’s Congo River. John narrowly escaped death on several occasions. His partner drowned when their canoe capsized in a treacherous set of rapids.

In the following decade, John studied primitive native cultures in Borneo, Brazil and New Guinea (No.10-12). He climbed Mt. Kilimanjaro, The Matterhorn, went scuba diving off the Great Barrier Reef in Australia, hiked the Great Wall of China, climbed a pyramid in Egypt, watched a fire-walking ceremony in Bali and wrote an article in National Geographic.

John’s list also included doing a dive in a submarine (U.S.S. Menhaden), skydiving, building his own telescope, lighting a match with a .22 rifle and milking a poisonous snake. He read the complete works of Shakespeare, Plato, Aristotle, Dickens, Thoreau and Hemingway. And he learned to play polo, rode a horse in the Rose Bowl Parade, visited his grandfather’s birthplace in Denmark and retraced the journeys of Alexander the Great and Marco Polo.

“Writing down a goal is important,” John told the Los Angeles Times in 2004. “Growing up, we’re told to be realistic and to get a job. When we do our imagination and dreams die. Most people say ‘Someday I’ll do that’ and it often ends up ‘If only I had done that.’”

John Goddard also achieved No. 126 – To marry and have children. He had six children and 10 grandchildren who loved the adventure stories he told of pursuing his childhood dreams. Although he was bitten by a rattlesnake, charged by elephants, got trapped in quicksand, crashed an airplane and almost drowned twice, he never thought about giving up. John climbed 12 of the highest mountains in the world and his exploration over six decades took him to 121 countries.

Over the years, John Goddard’s life list grew to more than 400 items. He accomplished 120 of the original 127 items on his list. He never climbed Mt. Everest, visited the North Pole or became a doctor.  Neither did he complete reading the entire Encyclopedia Britannica. In May 2013, 73 years after creating his life list, John Goddard died at age 88 in La Canada, California – still hoping to someday go to the moon (No. 125).