by peteblack4ua@gmail.com | May 13, 2021 | Adversity, Determination Despite the Odds, Long Shots | 2 comments 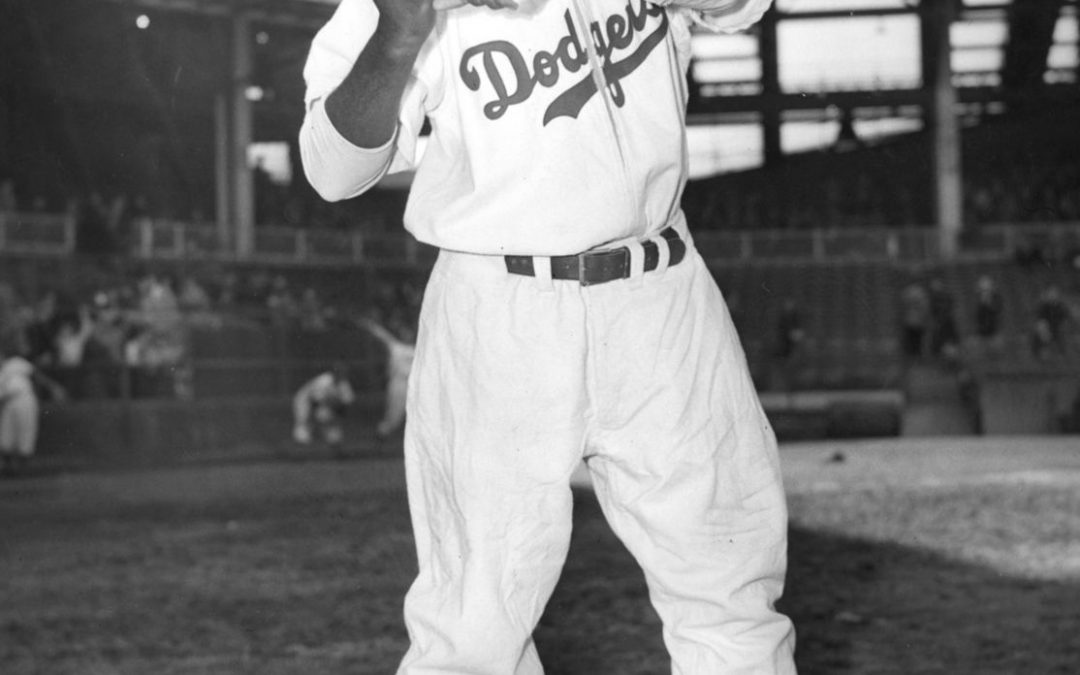 1945 – Brooklyn, New York: Branch Rickey, the owner of the Brooklyn Dodgers was deeply concerned that there were no black players in major league baseball. He knew baseball needed to change, but he knew it would be challenging to break the color barrier. Rickey was willing to take the risk.

Rickey’s challenge: to find the right black player. He needed a man who was not only a great baseball player, but also someone with tremendous courage and impeccable character.  He found his man playing for the Kansas City Monarchs.

In 1919, Jack Roosevelt Robinson was born in Georgia to sharecroppers. When he was six months old, his father left home, leaving his mother to raise five children. She moved the family to Pasadena, California, to be near relatives. She found a job as a maid and Jackie found the ball fields. After high school, he became the first athlete at UCLA to win varsity letters in four sports: baseball, football, basketball, and track. In 1941, Jackie was named to the All-American football team as a running back.

After UCLA and a two-year stint in the Army, Jackie signed to play with the Kansas City Monarchs in the Negro Baseball League. After his first season, he was shocked to get a call from Branch Rickey offering him a contract to play for the Dodgers. The deal included a big salary increase and a ‘turn the other cheek’ clause. Jackie agreed to maintain his dignity and cool regardless of the racial insults that he might experience.

After playing one year in the minor league, on April 15, 1947, the opening day of the season, Jackie Robinson made his major league debut at first base for the Brooklyn Dodgers. He took the field to a chorus of boos from the hometown crowd.

The level of racial prejudice that surfaced during the course of the season was worse than Rickey anticipated. Baseball fans everywhere yelled racial obscenities at Jackie and often threw things at him. Several of Jackie’s teammates quit the team rather than play with him. In ballparks around the league, players refused to play when the Dodgers came to town. Opposing pitchers frequently threw pitches at Jackie’s head. In most towns he had to stay in different hotels and eat in separate restaurants from his teammates.

Despite the jeers, catcalls and death threats against him and his family, Jackie honored his agreement with Rickey by not reacting to the fans and he had a great season on the field. His 12 home runs helped the Dodgers win the National League pennant for only the third time in history. Jackie stole a league-leading 29 bases and was voted National League Rookie of the Year.

Off the field, the season was a nightmare for Jackie and his wife, Rachel. He thought about quitting after most of the 154 games. Jackie had entered a world where being a good baseball player wasn’t going to be enough. An entire nation was watching him and the majority was pulling against him. He bore the heavy burden of great expectations, but realizing the stage was bigger than he was, Jackie hung in there through the difficult season.

Over the next two years Jackie’s performance and exemplary character won over baseball fans, and he opened the door for other black players. In 1949, he led the league in batting average and stolen bases on his way to winning the National League MVP award. In 1955, Jackie helped lead the Brooklyn Dodgers to their first World Series win over their crosstown rival New York Yankees.

Jackie Robinson retired in 1956 and in 1962 he was elected to the Baseball Hall of Fame. In 1997, to celebrate the 50th anniversary of his integrating baseball, every major league team permanently retired his number 42. He is the only major league player to have ever received this honor.