by peteblack4ua@gmail.com | Feb 18, 2022 | Courage Under Fire, Hanging on to Hope, Rising Above Circumstances | 2 comments 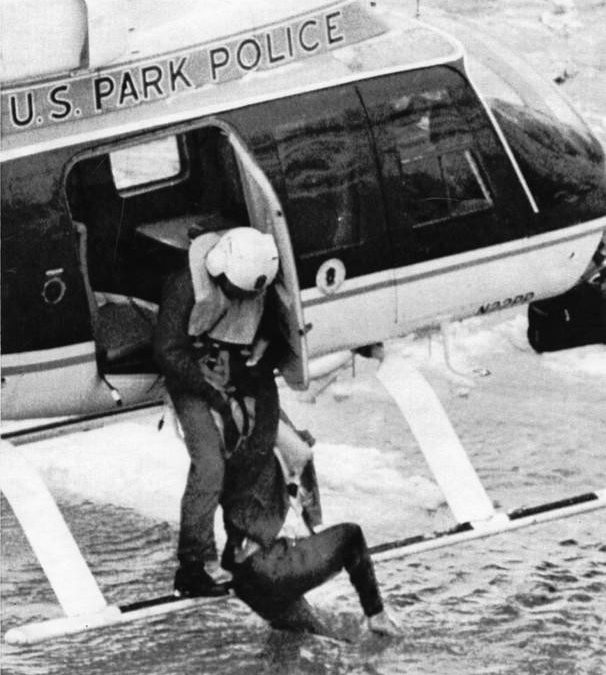 January 13, 1982 – Washington D.C.: There are not many Americans who remember the name Arland Williams. Air Florida Flight 90 crewmember Kelly Duncan, and passengers Patricia Felch, Priscilla Tirado, Joseph Stiley and Bert Hamilton will never forget his name, nor the sacrifices he made for them.

Arland Dean Williams, Jr. was born September 23, 1935, in Mattoon, Illinois. After graduating from high school in 1953, he attended The Citadel Military College in Charleston, South Carolina, one of the nation’s top military institutions. Following college graduation, Williams served two years in the military before starting a banking career, which led him to become a bank examiner for the Federal Reserve Bank in Atlanta.

On that January day in 1982, Williams, a veteran bank examiner, was in Washington for the unpleasant task of closing a key Florida bank. The weather forecast called for rain with temperatures in the low 30’s; however, a low-pressure system tracked further south than predicted causing the fifth worst snowstorm in Capitol City history. With some flights already canceled, several of William’s colleagues opted to spend an additional night in town, but Williams headed to the airport.

After several weather delays and additional time to de-ice the plane, Air Florida Flight 90 took off from Reagan Washington Airport in a blinding snowstorm with 79 passengers and crew on board headed for Tampa. Seconds after takeoff, and less than a mile from the runway, the Boeing 737 clipped seven vehicles on the 14th Street Bridge, killing four people, before crashing nose first into the frozen Potomac River.

The tail-section of the plane broke off on impact and resurfaced about 30 yards from the riverbank, with 6 passengers miraculously clinging on for survival and screaming for help. Motorists responded by trying to make ropes from jackets, clothes, and fan belts, but were unsuccessful in reaching the survivors. Several bystanders tried to swim to the wreckage, but broken ice and shockingly cold water turned them back.

Twenty minutes after the crash, as hope for a rescue faded, a U.S. Park Service helicopter arrived on the scene. Fighting the blustering winds, the chopper lowered a lifeline and flotation ring, which Arland Williams grabbed and handed to one of the women. After dragging her to paramedics on shore, the chopper returned for another passenger. Again, Williams reached for the ring and passed it to a second female passenger.

The process of Williams passing the lifeline to other passengers would repeat itself five times. But when the helicopter returned for Williams, he was gone – he had slipped beneath the frigid waters.

Arland Williams’ selflessness received national attention, due to his heroics and because of his anonymity – it took several weeks before he was officially identified. Williams’ heroics symbolized the goodness and courage in every man. His actions not only provided a lifeline to five total strangers, but they inspired millions who would learn of the story in the news.

Williams’ final actions are difficult to comprehend. It is hard to find words to describe his selfless actions in the icy waters of the Potomac River on that late Wednesday afternoon two miles from the White House.

Undoubtedly, he was desperate to live just like the others. What is the difference between a hero and a coward? They both are afraid of dying. The difference is in the choices they make.

The nation’s capital has many monuments to heroes – George Washington, Thomas Jefferson, Abraham Lincoln, and Martin Luther King, Jr. to name a few. On March 13, 1985, three years after Arland Williams made the ultimate sacrifice for his fellow passengers, the 14th Street Bridge was renamed the Arland D. Williams, Jr. Memorial Bridge – a Washington D.C. monument to a little-known hero.