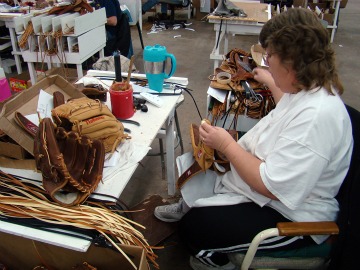 Nocona, Texas, population 3,033, was once the “Leather Goods Center of the Southwest.” The two-stoplight town, located about 100 miles northwest of Dallas, has been home to a number of boot and belt companies dating back to the cattle drives 150 years ago. Most of the leather manufacturers are gone now. In the 1960’s, they moved to places like China, Vietnam, or the Philippines. One company did not get the memo. At 208 Walnut Street sits a 60,000 square foot brick building that stands as a monument to perseverance and a stubborn refusal to follow the herd.

The Nokona Athletic Goods Company was founded in 1927 to make wallets and purses. Two years later, America’s greatest depression almost killed the demand for billfolds. Facing bankruptcy in 1934, and desperate for something that would sell, Robert Storey, a former Rice University baseball player came up with the idea to make baseball gloves. Heretofore, most players did not use baseball gloves, they played the game barehanded, but it was an idea whose time had come and an idea that saved Nokona.

During World War II, the company was chosen as the single supplier for baseball gloves to the U.S. military and the company prospered. The 1950’s were the peak years for Nokona and sales approached 250,000 gloves annually.

In the 1960’s with the arrival of cheap imported baseball gloves from Asia, the company almost went out of business again. Nokona refused to import cheap gloves, or make them offshore, but staked their future on the bet that Americans were willing to pay more for a high-quality glove with “The American Glove” stitched into every pocket. In addition to cowhide, Nokona began using buffalo and kangaroo hides, creating a soft but durable glove and differentiating the company as a maker of handmade, high quality, high-dollar gloves. They also added softball gloves to the line and were able to stabilize annual production at roughly 50,000 gloves.

On July 18, 2006, the glove factory – Nocona’s main factory – burned to the ground. Company President Rob Storey, grandson of Robert Storey, announced immediately to the 80 employees that no one would be laid off and no one would miss a paycheck. He bought tickets for all employees to attend a Texas Ranger baseball game to boost morale. The company quickly found an abandoned boot factory to use as a temporary location, salvaged a couple of pieces of equipment from the fire, and produced its first glove 50 days after the fire. By January, Nokona was back to its pre-fire production level of 200 gloves a day while the building was being rebuilt on Walnut Street.

In 2010, the company was sold to Cutter’s Gloves, a Phoenix, Arizona, company who renamed Nokona “American Original Ballglove Company,” but maintained the Nokona Made-in-America tradition. Robby Storey, great grandson of the glove founder, manages the day-to-day operation of the plant. As plant manager he is often asked, “Why not move offshore like the rest? He replies, “Because I am crazy – this is all I know how to do.”

Today, 90 years after it began, the 35 employees in the brick building on Walnut Street make about 40,000 Nokona gloves annually in a U.S. market where six million gloves are sold. Visitors can tour the factory and a museum of the history of baseball gloves for $5. Fifty years after competitors moved overseas to maximize profits, Nokona hangs on to the American dream in north central Texas. Success is often hanging on after others have let go.