by peteblack4ua@gmail.com | Jan 28, 2019 | Adversity, Against the Odds, Chasing Your Dream, Refusing to Quit | 6 comments 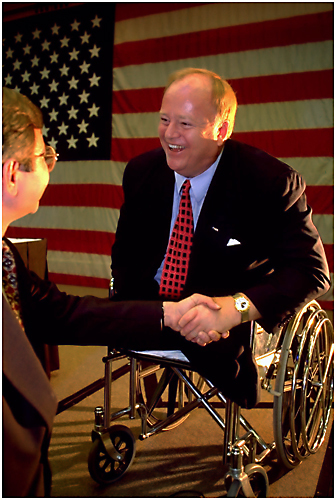 April 8, 1968 – Khe Sanh, Vietnam: Captain Max Cleland received an order to set up a radio relay station on a hill east of Khe Sanh. As he exited the helicopter, the 26-year-old Army signal officer saw a grenade at his feet. When he reached down to pick it up, it exploded, blowing off his right arm at his elbow and his right leg at the knee. His left leg was shredded below the knee.

Cleland was flown to a field hospital where five surgeons saved his life, but they could not save his left leg. It took more than 40 pints of blood and lots of prayer to get the 6’ 2” paratrooper through the first week. Cleland spent the next 18 months between the Walter Reed Army Hospital officer amputee ward and the Veterans Hospital in Washington, D.C.

Cleland’s new battle was physical and mental. He blamed himself. He wondered how the pin came out of his grenade? What could he do with just one arm? His life and his dream for political office were over. Why did he volunteer for Vietnam?

Max Cleland grew up on Main Street in Lithonia, Georgia, a small Atlanta suburb. He vividly remembers the day in 1952 when Georgia Senator Dick Russell came to Lithonia while campaigning for President. Cleland met Russell at a BBQ in a pasture, and decided, at age 10, to one day become a U.S. Senator like Dick Russell.

In 1960, after graduating from high school, Cleland attended Stetson University in Deland, Florida. With the war in Vietnam heating up, he joined the Army ROTC program with a plan to volunteer for Vietnam after he graduated. Cleland graduated from Stetson University in 1964, joined the Army, and continued his education at Emory University earning a Master’s degree in American History three years later. He shipped off to Vietnam the following month.

Two years after Khe Sanh, Cleland was back in Lithonia, living with his parents. He had no car, no job, and no money. Having grown tired of eating pimento cheese sandwiches with his mother, he decided to run for a Georgia state senate seat. Friends and family helped raise $10,000 for his campaign. Nobody thought he could win – a long shot at best. But in 1970, 28-year-old Cleland won the election, becoming the youngest member of the Georgia Senate.

Cleland served three terms in the Georgia Senate. In 1976, U.S. President Jimmy Carter, a friend, and fellow Georgian asked Cleland to be head of the Veterans Administration. At age 34, he assumed responsibility for 225,000 employees, 172 hospitals and 81 Nursing Homes. After Carter’s one term in office, Cleland was back in Lithonia eating pimento cheese sandwiches with his mom.

In 1982 Cleland was elected Georgia Secretary of State. He served in that capacity for twelve years. In 1995 Senator Sam Nunn announced his plans to retire from the U.S. Senate. In 1996, almost 30 years after thinking his life was over, Max Cleland, the triple amputee, was elected to Dick Russell’s Senate seat. His staff found Russell’s old desk in storage and set it up in Cleland’s office.

Cleland served one term in the U.S. Senate. After leaving office, he served on the 9/11 Commission for several years. In 2009 President Barack Obama nominated Cleland to serve as Secretary of American Battle Monuments. He also serves as an adjunct professor at American University.

“I wasn’t supposed to come back from Vietnam.” Max Cleland recalled, “Nobody thought I’d learn to walk, or drive, or get a job. Certainly, nobody thought I would be elected to the U.S. Senate. In the end, I just kept going, and pushing, because I couldn’t stand the alternative.”

“The human spirit is stronger than anything that can happen to it.”     C.C. Scott