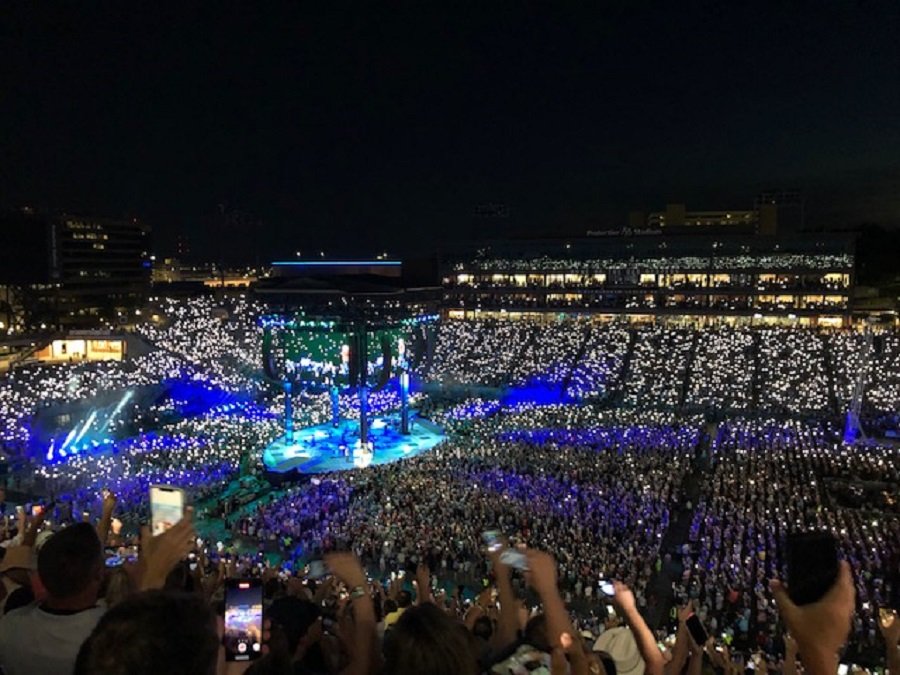 June 4, 2022 – Protective Life Stadium – Birmingham, Alabama: More than 45,000 people packed the venue to hear Garth Brooks, the biggest solo musical artist in history. The atmosphere was electric. The excitement palpable. He played for more than 2.5 hours. No one left disappointed and for many it was the best concert they had ever attended. One more amazing night in Garth’s wild ride to the top.

There was a time in the summer of 1985 when Garth could not have imagined thousands of adoring fans singing his songs. After graduating from Oklahoma State University, he packed all his belongings into his Honda Accord and took his dream to be a country singer east along Interstate 40 to Nashville. His mother, Colleen, had begged him not to go. Having once recorded on Capitol Records, she knew how difficult it would be. She wanted Garth to get a real job.

The Wild Willie’s Saloon crowd in Stillwater, Oklahoma, where Garth played, thought he had a chance. They passed the hat to give him a few extra bucks for his journey. Garth told everyone he was going to Nashville to become a star in the country music business. He gave up his Stillwater apartment and quit his job at DuPree’s Sporting Goods.

Garth wasn’t the first guy to arrive in the Music City with a dream. The roads into Nashville are jammed with talented singers and songwriters hoping their moment has come. Garth did have an advantage, though. A friend of a friend got him a meeting with Merlin Littlefield, the director of the American Society of Composers, Authors and Publishers.

Littlefield listened to Garth’s demo tape. Garth sat anxiously waiting, hoping to hear that he was destined for stardom. “Son, you’ve got a choice,” said Littlefield. “You either starve as a songwriter or get five people and starve as a band.” Garth listened to Littlefield talk about the realities of the country music business before Littlefield ended their meeting with, “Go back home.”

Garth was shocked. He left Nashville 24 hours after his arrival feeling like a whipped puppy. He didn’t go straight to Stillwater where all his friends and well-wishers were. He was too embarrassed. He went home to Yukon, Oklahoma, where Colleen did her best to comfort him. “His trip to Nashville wasn’t a failure,” she said. “He just didn’t know how hard it would be.”

Garth was miserable, but he didn’t stay that way for long. After licking his wounds for a few weeks, he discovered his old apartment in Stillwater was still available. He got his job back at DuPree’s and the crowd at Wild Willie’s was thrilled to have him back.

Garth formed a band, Santa Fe, which performed four nights a week at Wild Willie’s and at every other venue that would allow them to perform. Two years after his disappointing first trip to Nashville, Garth took his band and headed back for a second go at it. This time he was better prepared and more determined. In 1989, Garth recorded his first album Hungry Years, which went to No. 2 on the Billboard Top Country albums list. Hit singles The Dance and If Tomorrow Never Comes and reached No. 1 and No. 2, respectively.

Today Garth Brooks is the No. 1 solo selling artist in U.S. history with more than 157 million albums sold. He has received every accolade the country music industry has to offer. He is the only artist to receive nine RIAA Diamond Awards for albums with more than 10 million in sales and the first seven-time winner of the CMA Entertainer of the Year Award.

Garth had loads of talent and a big dream, but he is a member of the Country Music Hall of Fame, the Songwriters Hall of Fame and the Grand Ole Opry, because he persevered through the hungry years.