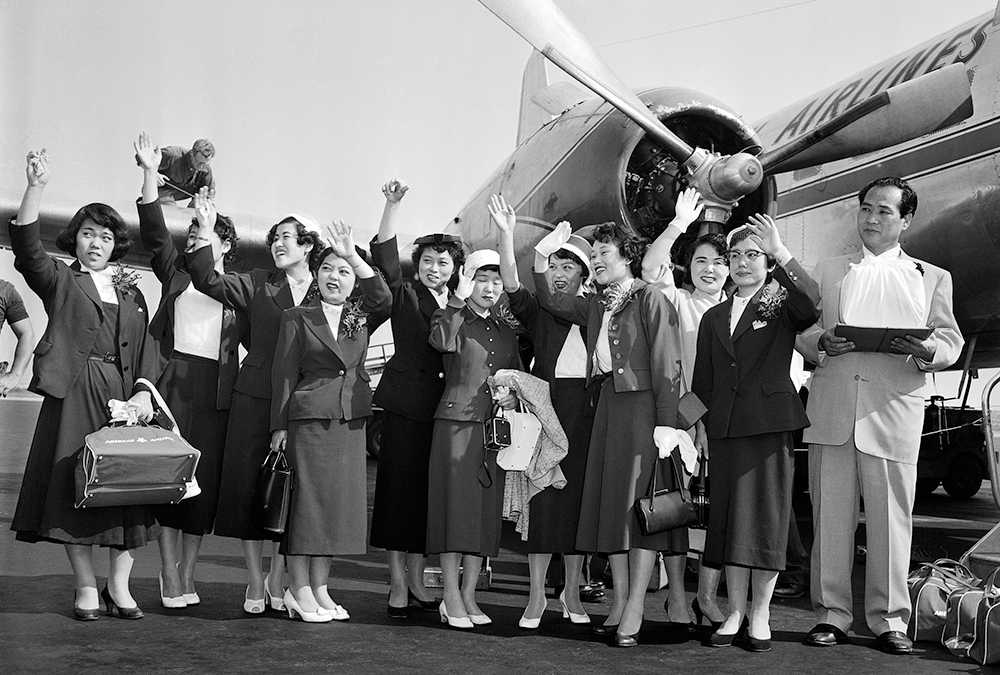 August 6, 1945 – Hiroshima, Japan: The air raid sirens blared at 6 a.m. but Kiyoshi Tanimoto ignored them and went to help a fellow church member move some household items. Two hours later, he saw a brilliant flash of light as a strong blast of wind knocked him to the ground.

Stunned but unhurt, Tanimoto looked around in disbelief. Many houses were leveled, and the city was on fire. People were running everywhere, many of them in flames. After running several blocks, he found his home destroyed but his wife and baby were standing in the street, miraculously unhurt.

A week later Tanimoto, a Methodist minister, learned that Hiroshima had been obliterated by an atomic bomb dropped from a U.S. B-29 bomber. Of the city’s 240,000 residents, 100,000 had been killed and another 100,000 were injured. Tanimoto went to work helping survivors rebuild their lives, their houses and eventually the church.

By 1951, the Nagarekawa Methodist Church was caring for 50 orphan girls who had been badly burned and disfigured in the bombing. Because of their hideous scarring, the girls were social outcasts. A typical orphan, Hiroko Tasaka, was 14-years-old in August 1945. In her high school class, 43 of the 53 girls were killed. Hiroko’s face was severely scarred and drawn; she had no nose or lips, making eating, drinking and smiling difficult. The first time she saw her face in a mirror, she cried and wanted to die.

Tanimoto established the Hiroshima Peace Center Foundation to raise money to help the girls. Because the best plastic surgeons were in the United States, Tanimoto visited there hoping to gain support to bring some of the girls to America for surgery. First Lady Eleanor Roosevelt visited Tanimoto’s church to learn more about the project.

When Norman Cousins, editor of the Saturday Review, became aware of the project, he committed to help Tanimoto. Previously his article about “A-Bomb Orphans” had received a mixed reaction across the country. Tanimoto and Cousins went from foundation to foundation trying to raise funds, only to be turned down due to hatred toward Japan.

They finally found two plastic surgeons at Mt. Sinai Hospital in New York City willing to do the medical operations at no cost. Then they discovered a wealthy New York attorney who was willing to cover the hospitalization costs. When every trans-Pacific airline refused to fly the girls to America, the U.S. Army agreed to transport the girls. The Religious Society of Friends, a Quaker organization, found foster homes for the orphans during their stay in America.

On May 9, 1955, four years after Reverend Tanimoto first visited the United States, 25 girls aged 15 to 34 arrived in New York City via a U.S. Army plane. Newspapers and television stations quickly picked up on the “Hiroshima Maiden” story. Donations from corporations, churches and schools poured in from around the country. Captain Robert Lewis, the co-pilot of the B-29 that dropped the bomb, and his crew made the initial donation to the project.

The project, estimated to take a year, took 18 months to complete. A total of 138 surgeries were performed, with Hiroko Tasaka undergoing 13 of those. Results were dramatic, including considerable improvement to facial features, increased use of badly burned hands, and most importantly, hope for a group of girls who had been without hope.

In early November, the maidens returned to Hiroshima. American families continued to send money, which was used for college educations and business start-up funds. Several years later, all 25 girls were in school or employed. Half of the group married and went on to have 19 healthy children between them.

Kyoshi Tanimoto’s caring and persistence to find support for the Hiroshima Maidens transformed their lives and helped heal the wounds between two nations. Tanimoto pastored Nagarekawa Methodist Church until he died in 1986. He devoted his life to caring for atomic bomb survivors. In 1987, the Kiyoshi Tanimoto Peace Prize was established and it is awarded annually to individuals who promote world peace.